A few years ago, you could hardly visit a website without interacting without some form of Adobe Flash Player element. The software was used to build websites, games, and ads. 20 years ago, it was the go-to software.

But times changed and Flash did not seem to adapt fast enough to keep up. Fast-forward to 2020, Adobe says it intends to pull the plug on Flash by the end of the year.


According to an announcement posted on their website in 2017, Adobe will stop updating and distributing Flash Player after December 31, 2020, heralding the end of the road for the plugin.

Govind Balakrishnan, Adobe’s vice president, said the decision to end the plugin was informed by the realization that other technologies had emerged with the capability to provide better alternatives to the flash player. However, Govind noted that few technologies had impacted the Internet era as much as Flash.

According to Malcolm Barclay, who initially worked on Flash as it rolled out, the plugin had its good days. However, Flash ignored the fact that mobile devices were ushering in a new era. This was a costly mistake leading to the plugin’s death.

So, how did it get here? Let us start right at the beginning.

Flash Player was initially developed and released by Macromedia in 1996. Macromedia and Flash Player were later acquired by Adobe Systems. 20 years ago, Flash Player was the browser plugin that ruled the Internet era. It was used for running rich Internet applications, viewing multimedia contents, and playing audio as well as videos on YouTube.

In spite of its popularity, Flash was plagued by security vulnerabilities that allowed hackers to exploit its weaknesses to hit their victims. Then websites shifted from using the Flash plug-in to HTML5. Flash’s goose was cooked when, in 2011, between the move to HTML5 and the increasing popularity of mobile devices, the company failed to read the writing on the wall, and announced that Adobe was no longer developing Flash for mobile devices.

Part of the reason most websites opted for HTML5 is that it can be used to play multimedia content within webpages without the need to install or update plugins for that purpose. These vulnerabilities might explain why Apple was its greatest critic, and why the late Steve Jobs never hid his feelings about the plugin’s shortcomings.

The modern browser’s preference for HTML5 seemed to add salt to injury, thus speeding up Flash’s exit. All of these issues probably weighed heavily on, and informed, Adobe’s decision to phase out the plugin.

Also, with browsers such as Google making Flash a click-to-play plugin that required users to explicitly enable it, and little that Flash could do that HTML5 could not, Flash became an unnecessary add-on extension.

While Google continued to use Flash, unlike Apple, it soon realized that it was pointless to continue holding on when Adobe stopped supporting the software towards the end of 2019. And that is how Adobe Flash Player was relegated to the back burner, leading to its upcoming demise.

The end had come and it was time for a plugin that had ruled the technology world for almost two decades to say goodbye.

Employees Hurt by Illegal Non-Poach Agreement Between Apple, Google, Intel, IBM, eBay, Microsoft, an...
How to Back Up one Mac to another Mac Using Time Machine
New Bluetooth Internet Toothbrush
It is Now Illegal to Hold a Cellphone to Your Ear While Driving in California
How to Turn Off Emoji in iMessage and Instead Use Text Smiley Faces
What You Should Know About WhatsApp's Business App and WhatsApp Business API
New Device Tracking Apps Help You Find Your Lost Keys, Your Wallet, Even Your Phone Itself
iMessage Stopped Working? Not Forwarding to or Getting the Code on Your Macbook or iPad? Try This

2 thoughts on “Why is Adobe Flash Player Being Discontinued? We Explain” 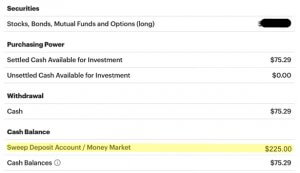 What is a “Sweep Account” in Etrade and Other Online Financial and Investment Services?