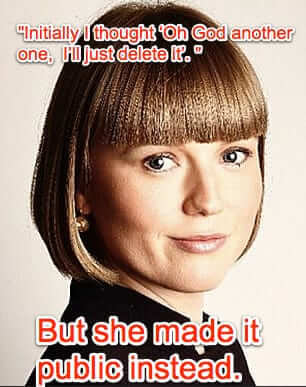 By now you may have heard about the Charlotte Proudman and Alexander Carter-Silk brouhaha. If you haven’t, here’s the bottom line: Charlotte Proudman, an up and coming young barrister in the UK, sent a LinkedIn connect request to Alexander Carter-Silk, a prominent, senior intellectual property solicitor. Carter-Silk accepted her request, and in his reply, commented on her LinkedIn profile picture. That’s when all hell broke loose, with Proudman attacking Carter-Silk, saying she found the compliment offensive, and making their private In-Mail public – very public.

What was Carter-Silk’s offensive comment? This, sent in response to her LinkedIn request:

Charlotte, delighted to connect, I appreciate this is probably horrendously politically incorrect but that is a stunning picture. You definitely win the prize for best LinkedIn picture I have ever seen. Always interest to understant (sic) people’s skills and how we might work together. Alex

And, and this is critical: it isn’t as if he was trolling LinkedIn for women and hitting on them. She reached out to him.

In fact, perhaps the most offensive part of his email was in his last sentence, which contains two typos.

Certainly we don’t think that it deserved the outraged response that he received from Ms. Proudman:

I find your message offensive. I am on linked-in for business purposes not to be approached about my physical appearance or to be objectified by sexist men. The eroticisation of women’s physical apperance is a way of exercising power over women. It silences women’s professional attributes as their physical appearance becomes the subject.

Unacceptable and misogynistic behaviour. Think twice before sending another woman (half your age) such a sexist message).

As you can see, immediately Miss Proudman positioned this as if he approached her. Again, while reasonable minds can differ as to whether what he said was ‘appropriate’, he did not “approach” her, he responded to her connection request. 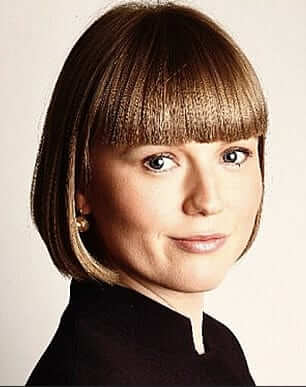 And yet, what seems to be lost in the media frenzy is that it was she who approached him. It’s not as if he were some masher, trolling LinkedIn for comely colleagues on whom to foist his uninvited attentions.

Sure, maybe his comments were over the top, but don’t let’s pretend that he approached her out of the blue to compliment her.

Because Ms. Proudman, who is, perhaps not surprisingly, working towards her PhD by researching female genital mutilation, made the exchange public, posting screen shots of the private email, and talking about it incessantly on her Twitter feed.

Why? Well, who can really say. Ms. Proudman told the Telegraph that “I was just so infuriated after I read the message. Initially I thought ‘Oh God another one, I’ll just delete it’.”

While we rather doubt that she really receives that many compliments on her LinkedIn profile picture, what is perhaps more relevant is where we say she ‘told the Telegraph’. Because yes, Ms. Proudman has received more media attention by publically shaming Mr. Carter-Silk than she could possibly have bought as a fairly newly-annointed barrister. 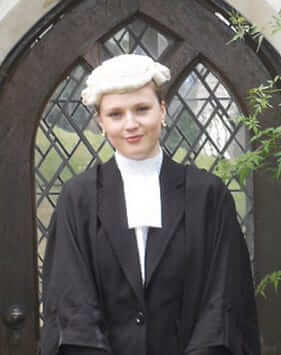 And it certainly won’t be the case now. Because, in fact, not all of the attention she has received over this has been people rushing to her side in a ‘sisterhood is powerful’ frenzy. 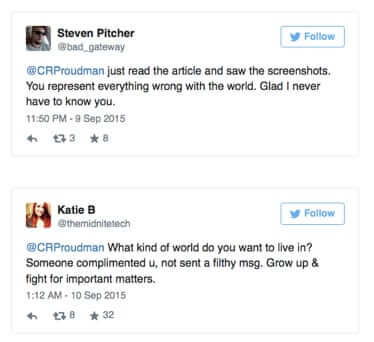 And, in fact, as a follow-up piece in the Telegraph points out, Proudman has been told she has all but ruined her career, as this is more about privacy than sexism. She has made a private communication public – oh so very public – so who will trust her discretion now?

Much like Kelly Blazek before her, and Dianna Abdala before that, Ms. Proudman may learn that discretion is indeed – or rather would have been – the better part of professionalism.

Number of people who have enjoyed this article: 1,928