Few people aren’t aware of at least one of the Hillary Clinton, Sony Pictures, or American Egg Board email scandals. But what should we learn from them, and has anybody actually learned from them?

To recap them for you:


1. Hillary Clinton used her private email to conduct state business (by communicating about state matters) while she was the Secretary of State.

2. The hacking of Sony pictures led to the release of dozens of private, and embarrassing, emails between Sony executives at the highest level.

3. The American Egg Board, all in a tizzy over Hampton Creek’s vegan mayonnaise product, Just Mayo, exchanged email among its members which included paying someone off to encourage Whole Foods to not carry Just Mayo and, more shockingly, even if they were kidding, emails suggesting taking out a contract hit on Hampton Creek’s CEO, Josh Tetrick

You can read an excellent overview of the whole Hillary Clinton email scandal at the BBC.

But here, more to the point, is where you can read nearly 8000 pieces of Hillary’s personal email, as a result of a Freedom of Information Act (FoIA) request.

And you can read the email between American Egg Board members here, also under a FoIA request.

And the Sony execs? While not subject to FoIA requests, they were roundly embarrassed when internal emails, such as the one below, were made public:

Rudin: (suggests she could ask the President if he would like “to finance some movies.”)

Pascal: “I doubt it. Should I ask him if he liked DJANGO?”

Pascal: “Or the butler. Or think like a man?”

And then of course there was the tragic tale of Diana Abdala, whose email to a prospective employer, dissing them, ricocheted around the Internet at the speed of, well, the Internet.

And this brings us to our point: email communications are inherently insecure. And so not really private.

It’s easy to be lulled into a false sense of security, imagining that what you are clandestinely typing when it’s just you and your computer will go no further than the person to whom you are sending it.

That’s just not so.

The bottom line is don’t put anything in email that you wouldn’t want to see made public, and published on the Internet. And that is especially so if you don’t have a strong email retention policy.

Now, of course, not all of us are public servants or CEOs of quasi-governmental agencies who will be subject to Freedom of Information Act requests.

In fact many of us are private citizens. But so were the executives at Sony.

The point is, email is inherently not as privacy secure as you think, and it’s a lesson that we need to learn, and heed. Your email communications can be discovered and revealed through legal action, hacking, and, if you are involved at any level with government, Freedom of Information Act requests.

And of course, as soon as you hit send, it can be discovered through any of mechanisms on the receiver’s end as well.

And that’s not even taking into account the simple fact that the receiver may simply forward it to someone else – now it is in the possession of someone you never intended to see it, and subject to however secure their system is.

But over and over again we see people putting in email things that they would never shout on a crowded street corner.

Which is ironic, because that crowded street corner is less likely to care about what they are saying, and once it’s uttered, it’s gone – unlike something published on the Internet, where it can persist for decades. 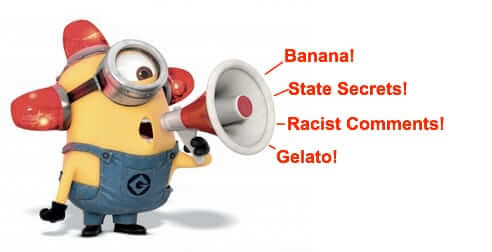 Article Name
What We Should Learn about Email Privacy from Hillary, Sony, and the Egg Board
Description
Few people aren't aware the Hillary Clinton, Sony Pictures, or American Egg Board email scandals. But what should we learn from them?
Author
Anne P. Mitchell

One thought on “What We Should Learn about Email Privacy from Hillary, Sony, and the Egg Board0 (0)”