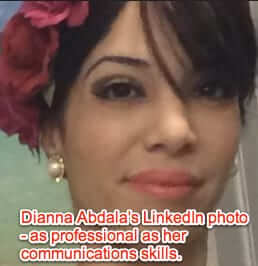 It’s good to remember that when you commit something to writing, people may read it. Including people whom you had never expected nor intended to read it.

And if the email happens to involve your professional reputation and standing in the community – and if it’s a small, tightly knit professional community, well – a single slip of the fingers can make or break your career.

This is a lesson which a young graduate of Suffolk University Law School, Dianna Abdala, is in the process of learning after having declined a job with the law firm of William Korman. Well, perhaps “declined” is putting it kindly.

As the story goes, Dianna Abdala interviewed with William Korman for a position with his criminal defense firm. Korman is, by all accounts, a well-respected trial attorney, who was recently named one of the up-and-coming lawyers in the Boston area by his colleagues. Abdala, having just graduated in 2004, even if she passed the bar on the first go in July of 2004 would be by any metric a brand new baby lawyer.

However, Korman, willing to give the new attorney a chance, offered her a job on the spot, and then started making preparations for her arrival. Following the interview, for reasons unknown to us, Korman contacted Abdala and revised the offer, reducing the salary in order that he might hire two attorneys, instead of one.

Abdala responded by email, with what can only be called a bizarre response, in which she not only declined the job offer, but cites her need to “support the lifestyle I am living” (she’s 24, fresh out of lawschool, for cripes sake – what kind of lifestyle does she have??)

She then closed with a line bringing to bear the full weight of her education: “I have decided instead to work for myself, and reap 100% of the benefits that I sew.”

She is, apparently, a seamstress as well.

Korman responded, and it just got more and more bizarre, with young Abdala at one point lecturing the more experienced Korman on the formation of contracts, and ultimately replying to Korman with, and I kid you not, “bla bla bla.”

It makes for great reading, and I’m obviously not the only one who thinks so. It started out by going the rounds of the online legal community. According to Mass Lawyer publisher, David Yas, the email has been passed around to an untold number of attorneys and firms, both in the local area and beyond. And even to firms in Europe.

Said Karman, “This has taken on a life of its own. The legal community is tiny, and the criminal-defense bar even smaller. They are surprised by this attorney’s responses to my simple queries. It’s so early in her career to be attacking someone like this. I just wish it had played out better.”

Amazingly, Abdala is not concerned in the least with how the outing of her attitude, poor communications style, and either lack of spelling acumen or mixing of metaphors will impact her employability as an attorney. Nor is she concerned that this has now been forwarded to several thousand people, at last count, and posted around the world. In fact, she is quoted as saying “I’m not upset at all. I’m enjoying the notoriety.”

Hey Dianna, enjoy it while you can. And along with “bla bla bla”, there’s another phrase you may want to brush up on: “Would you like fries with that?”

Here’s the email exchange; what do you think of the whole thing?

—–Original Message—–
From: Dianna Abdala [mailto: [email protected]]
Sent: Friday, February 03, 2006 9:23 PM
To: [email protected]
Subject: Thank you
Dear Attorney Korman, At this time, I am writing to inform you that I will not be accepting your offer. After careful consideration, I have come to the conclusion that the pay you are offering would neither fulfill me nor support the lifestyle I am living in light of the work I would be doing for you. I have decided instead to work for myself, and reap 100% of the benefits that I sew. Thank you for the interviews. Dianna L. Abdala, Esq.

—– Original Message —–
From: William A. Korman
To: ‘Dianna Abdala’
Sent: Monday, February 06, 2006 12:15 PM
Subject: RE: Thank you
Dianna – Given that you had two interviews, were offered and accepted the job (indeed, you had a definite start date), I am surprised that you chose an e-mail and a 9:30 PM voicemail message to convey this information to me. It smacks of immaturity and is quite unprofessional. Indeed, I did rely
upon your acceptance by ordering stationary and business cards with your name, reformatting a computer and setting upboth internal and external e-mails for you here at the office. While I do not quarrel with your reasoning, I am extremely disappointed in the way this played out. I sincerely wish you the best of luck in your future endeavors. – Will Korman

—–Original Message—–
From: Dianna Abdala [mailto: [email protected]]
Sent: Monday, February 06, 2006 4:01 PM
To: William A. Korman
Subject: Re: Thank you
A real lawyer would have put the contract into writing and not exercised any such reliance until he did so.
Again, thank you.

—– Original Message —–
From: William A. Korman
To: ‘Dianna Abdala’
Sent: Monday, February 06, 2006 4:18 PM
Subject: RE: Thank you
Thank you for the refresher course on contracts. This is not a bar exam question. You need to realize that this is a very small legal community, especially the criminal defense bar. Do you really want to start pissing off more experienced lawyers at this early stage of your career?

Did I already forward this to you?

OH MY GOD! Where to begin? First of all, how unprofessional. and secondly, it is “reap what you ‘sow,'” now “sew”. if she is going to use a clich?, couldn’t she at least spell it right? And WTF is with her “blab la bla”? Does she not read your e-mail about it being a small community?! So, finally, can I forward this along to some folks? I am sure they would love to see how the up-and-coming lawyers are comporting themselves! (Clearly she did not go to BU!!!) J

You can e-mail this to whomever you want.

Number of people who have enjoyed this article: 36,537