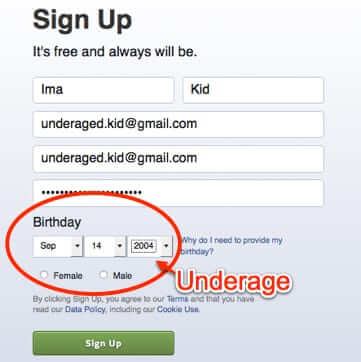 Countless parents wring their hands over trying to keep their underage children off Facebook, something which Facebook itself seems mostly unable to do, and unable to do at all if the child lies about their age when signing up. But one parent has done more than wring his hands: he sued Facebook.

According to accounts, the girl, who lives in Ireland, first started opening Facebook accounts when she was 11.

By the time she was 12, she was sending suggestive pictures of herself to men, and receiving pictures “of a sexual nature” from men, including one who had a restraining order against him.

The suit was initially filed about four years ago, and was finally due to go to trial this week, but instead Facebook settled for undisclosed terms.

The core of the case revolved around the girl’s parent’s contention that Facebook does not do enough to keep underage children (under 13) from opening accounts.

Said the father’s attorney, Hilary Carmichael, “I believe Facebook isn’t suitable for under-18s but the company isn’t even able to uphold its own policy of keeping under-13s out. If a child goes into an off-licence to buy alcohol or a shop to buy cigarettes, they’re asked for ID to prove their age.”

Added Carmichael, “Yet a child can join Facebook – and be exposed to a bigger population than that of the entire EU – without any ID being requested. An age check, like asking for a passport number, would be a simple measure to implement.”

The bottom line, says Carmichael, is that Facebook “relies on children stating their correct age and it doesn’t have any checks in place.”

And that, in fact, is true. Anybody can go to Facebook and sign up for an account. The only check they have is that you must put in your date of birth.

Of course, kids know to lie about their year of birth, in order to get around the “must be 13 or older” restriction. 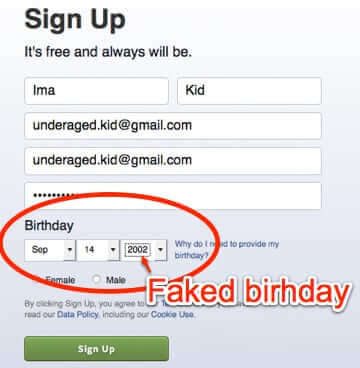 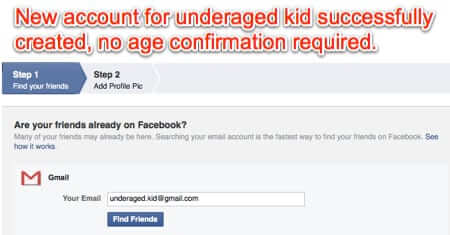 Now, some of you may be thinking “Well how on earth is Facebook supposed to verify that the person signing up is the age that they say the are?

Others may suggest that “that’s their problem.”

Perhaps the real question is, does Facebook even care?

In an article in the International Business Times, Simon Milner, Facebook’s Privacy Director for the UK, the Middle East, and Africa, is quoted as saying “We haven’t got a mechanism for eradicating the problem,” and that further, the reason that Facebook restricts users to over 13 years of age is not for child protection, but because of U.S. privacy laws.

Facebook does remove underage users when they are brought to Facebook’s attention and, in fact, according to the IB Times areticle, Facebook removes 20,000 underage users every day!

Now, we don’t know about you, but we consider the fact that Facebook removes 20,000 underage users every single day rather mind-boggling.

That’s 7,300,000 children under the age of 13 who are successfully signing up on Facebook every year. And those are just the ones who get caught, and removed. How many more don’t even get detected?

If even a fraction of the parents of those 7,300,000 children had the gumption that this one father did to sue Facebook, we’d bet that Facebook would figure out a solution pretty darned quick.

Twitter Allows Employees to Work from Home Indefinitely
Cop Selfies and Duck of Justice Feature on Bangor Maine PD Facebook Page
Insiders Urge Facebook and Apple to Fix Toxic, Intentionally Addictive Nature of Social Media and De...
New Facebook Patent Lets Lenders Determine Whether to Give you a Loan based on Your Facebook Friends
The Blue Whale Suicide Challenge Game for Teens - It's Real Enough
The 3 Things You Need to Know About the Heartbleed Bug
How to Stop Facebook from Posting Your Location (2016)
Court Rules Free Services Means You're Not a Customer, So No Privacy Protection
Share the knowledge

Number of people who have enjoyed this article: 2,410