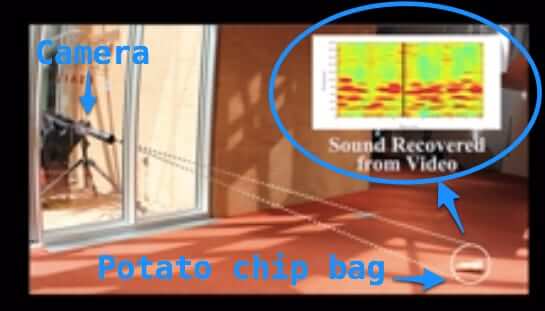 MIT grad student Abe Davis, along with colleagues, has demonstrated the ability to eavesdrop by reading the vibrations on objects such as a potato chip bag. Dubbed the “Visual Microphone”, Davis was able to use a regular digital camera to perform this feat. Which means that someone could appear to be filming the table next to you, but are actually about to decode what you are saying. Davis, along with MIT professors Frédo Durand and Bill Freeman, have also used this method to eavesdrop on the vibrations in a glass of water, and even on the leafs of a potted plant.

Explains Davis in an MIT news release about the Visual Microphone, “When sound hits an object, it causes the object to vibrate. The motion of this vibration creates a very subtle visual signal that’s usually invisible to the naked eye. People didn’t realize that this information was there.”

Generally speaking, the camera needs to record at a frequency higher than the speed of sound. However, explains the news release, “Because of a quirk in the design of most cameras’ sensors, the researchers were able to infer information about high-frequency vibrations even from video recorded at a standard 60 frames per second. While this audio reconstruction wasn’t as faithful as that with the high-speed camera, it may still be good enough to identify the gender of a speaker in a room; the number of speakers; and even, given accurate enough information about the acoustic properties of speakers’ voices, their identities.”

Observed Berkeley professor of electrical engineering and computer science, Alexei Efros, “This is new and refreshing. It’s the kind of stuff that no other group would do right now. We’re scientists, and sometimes we watch these movies, like James Bond, and we think, ‘This is Hollywood theatrics. It’s not possible to do that. This is ridiculous.’ And suddenly, there you have it. This is totally out of some Hollywood thriller. You know that the killer has admitted his guilt because there’s surveillance footage of his potato chip bag vibrating.”

You can read the MIT press release about Abe Davis’ visual microphone potato chip bag eavedropping experiments here. And here is a video explaining it:

Number of people who have enjoyed this article: 1,895