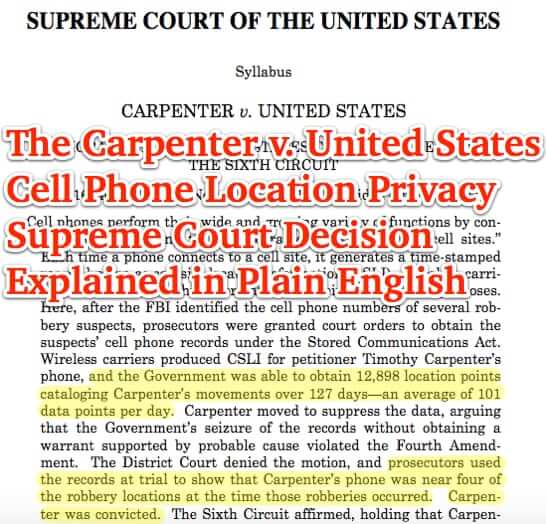 In a fairly stunning win for mobile phone privacy, the Supreme Court has ruled that law enforcement agencies must obtain a warrant before they can demand and receive from mobile carriers and mobile providers access to the cell phone location data (known as ‘cell site location information’, or CSLI for short) of a given cellular phone. In the case of Carpenter v. United States, the Supreme Court has held that tracking a cell phone is barely different than putting an ankle bracelet on an individual and monitoring their movements, and so overturned related case law that has been around for (up to) decades.

In 2011, following a string of robberies, the police arrested several suspects, one of whom then implicated several other individuals, including Timothy Ivory Carpenter. Prosecutors then went to Carpenter’s two mobile providers: Sprint and MetroPCS.

Prosecutors had been able to access phone records without a warrant for decades under (among others) the theories that a) they are business records, and b) that the individual whose records they are has voluntarily allowed a third-party – the carrier – access to that information, thus waiving a right to privacy.

Moreover, under the Stored Communications Act (SCA) 18 USC 121. which went into effect in 1986, and was amended in 1994, law enforcement and other governmental agencies have been able to get a court order demanding production of cell phone location information (CSLI) without a warrant “if the governmental entity offers specific and articulable facts showing that there are reasonable grounds to believe that the contents of a wire or electronic communication, or the records or other information sought, are relevant and material to an ongoing criminal investigation.”

It’s important to note here that the standards for requesting such a court order for the production of records are less strict – often much less strict – than the hurdles one must jump in order to have a warrant issued.

This is how Carpenter was ultimately nabbed. While Sprint had only two days of location information for Carpenter, while his phone was roaming in the area in which the robberies were being committed, Metro PCS produced location records for more than 4 months (127 days, to be exact).

There is a world of difference between the limited types of personal information addressed in Smith and Miller and the exhaustive chronicle of location information casually collected by wireless carriers today. – Chief Justice Roberts, Carpenter v. US

Now we must ask you to stop and think about this: prosecutors had access to every move that Carpenter made for 4 months, without having to get a warrant.

This is why the Supreme Court likened it to fastening an ankle monitor bracelet on someone who had never been convicted of a crime, and without even having to meet the standards of a warrant.

Explained Justice Roberts, “When an individual “seeks to preserve something as private,” and his expectation of privacy is “one that society is prepared to recognize as reasonable,” we have held that official intrusion into that private sphere generally qualifies as a search and requires a warrant supported by probable cause.” (Smith v. Maryland, 442 U.S. 735 (1979))

The Court goes on to elaborate that “Given the unique nature of cell phone location records, the fact that the information is held by a third party does not by itself overcome the user’s claim to Fourth Amendment protection. Whether the Government employs its own surveillance technology as in Jones or leverages the technology of a wireless carrier, we hold that an individual maintains a legitimate expectation of privacy in the record of his physical movements as captured through CSLI. The location information obtained from Carpenter’s wireless carriers was the product of a search.” (A reminder from high school civics class: the 4th Amendment protects U.S. citizens from warrantless searches except in narrowly defined circumstances.)

So, for all of the above reasons, the Court has ruled that in order to obtain cell site location information from mobile carriers and mobile providers, governmental agencies now must obtain a warrant.

Number of people who have enjoyed this article: 766