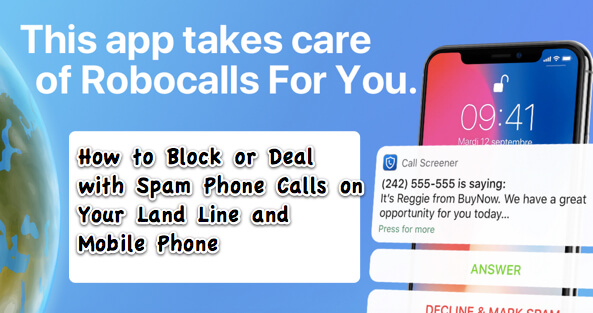 Yesterday we featured an article on the Federal Trade Commission’s (FTC) contest challenging anyone from the public to come up with a way to beat spam phone calls. The reason for expanding their efforts, says the FTC, is because complaints about spam phone calls, or, “robocalls,” more than doubled in April of 2012, from their last high in October 2010 . So what should we do to avoid these nuisance calls until our unknown hero steps forward with the answer?

There are several options available, depending on the type of phone that is receiving the unwelcome robocalls. If you have an iPhone, the popular app “Call Hero” may be up your alley. With CallScreen you get an actual, virtual phone call assistant, which allows you to screen your calls, and report the spam ones as spam.


For those with jail-broken iPhones, the Cydia app, “Call Blocker,” allows users to block any phone numbers that they don’t want calling their phone by selecting someone from the contact list, a phone number in their call history, or by manually entering the number.

If you have an Android phone, the Mr. Number app works by overriding all of the calling and text apps on your phone, allowing you to block phone numbers from people or companies you don’t want to speak with. The app will also block any incoming call that reads as “unknown” or “private.” Through the Mr. Number app you can set blocked numbers to be automatically hung up on, or sent straight to voicemail.

If you only have one or a few phone numbers that are the source of constant harassment, you may even try your phone company as some of them will block up to ten phone numbers, free of charge.

If you are receiving unwanted calls to your land line, chances are very good that your phone company offers a “call block” feature automatically. To block a call, simply pick up the phone and dial “*60,” then dial “3” to turn on the call blocking feature. When you receive another robocall, dial “*60” again, then press the pound key, and then press “01#” to block that phone number.

And if you want to give telemarketers a taste of their own medicine, check out RoboKiller, available for both iPhone and Android. RoboKiller allows you to not just screen and refuse phone spam, but to have your phone answer it and start a canned conversation with it!

There are a multitude of apps available for both the iPhone and Android phones that help thwart unwanted callers and even blacklist them, these are a few of our favorites, but we’d love to hear about the apps that you love in our comment section!

ParkMobile Mobile Parking App Now Has ParkMobile Zones Across the Country
How to See Examples of All of the Fonts on Your Mac
New Charlie Virtual Meeting Assistant App - a Privacy Nightmare?
How to Make Your Mac Back Up to a Specific Drive When Time Machine is Using More than One Drive, Plu...
Are You a Gig Worker or Consumer Impacted by the New Gig Work Laws? Let Us Know!
UPS Using All Sorts of Mobile Technology to Spy on UPS Drivers
How to Get Mac Mail to Show Threaded Conversations and How to Turn on Threaded Conversations Only fo...
Apple: It Seems Disagreeing with DOJ Means You Must be Evil and anti-American

Smell Something Fishy? It Could be the Chat Perf – the First Smell-o-Vision Accessory for the iPhone