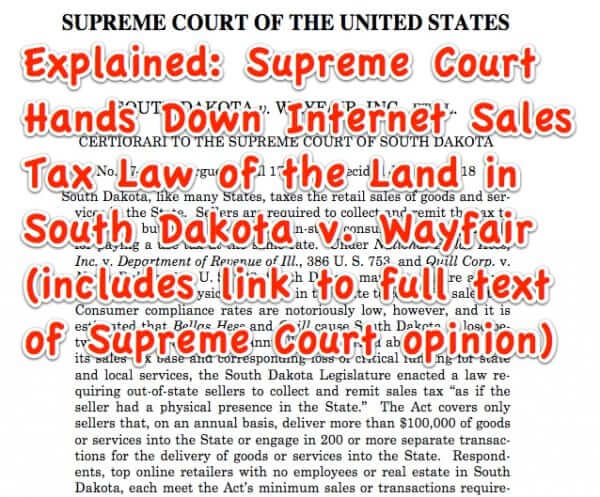 With today’s Supreme Court decision in the Wayfair v. South Dakota case, the Supremes have cleared the way for states to collect sales tax from Internet-based merchants who do not have a physical presence within the state; however the ruling is quite narrow in its scope and so does not open the floodgates for states to tax anybody and everybody who arguably does business online within a given state. Read on for a plain English explanation of this Internet sales tax decision, as well as a link to the full South Dakota v. Wayfair decision and the dissenting opinions.

Now, to understand the backdrop to this, you need to know that way back in 1992, the Supreme Court, in another case, Quill Corporation v. North Dakota, held that it was unconstitutional for a state to collect sales tax from a business that was not within that state unless the business had a substantial connection to that state. In other cases, including today’s Wayfair case, this is called a “substantial nexus”.

In the case of South Dakota’s law, an online merchant without other physical presence in South Dakota must have sold at least $100,000 in good or services within South Dakota in a given year, or have engaged in at least 200 separate transactions involving the sale of good or services into the state within a year. That, the Supreme Court thought, was a fair threshold, and also establishes a substantial nexus.

Also, said the Court, South Dakota has adopted the Streamlined Sales and Use Tax Agreement. The Streamlined Sales and Use Tax Agreement (SSUTA) “minimizes costs and administrative burdens on retailers that collect sales tax, particularly retailers operating in multiple states. It encourages “remote sellers” selling over the Internet and by mail order to collect tax on sales to customers living in the Streamlined states. It levels the playing field so that local “brick-and-mortar” stores and remote sellers operate under the same rules.” As Justice Kennedy, writing for the majority, also notes, SSUTA also “provides sellers access to sales tax administration software paid for by the State. Sellers who choose to use such software are immune from audit liability.”

South Dakota’s tax system includes several features that appear designed to prevent discrimination against or undue burdens upon interstate commerce. First, the Act applies a safe harbor to those who transact only limited business in South Dakota. Second, the Act ensures that no obligation to remit the sales tax may be applied retroactively. S. B. 106, §5. Third, South Dakota is one of more than 20 States that have adopted the Streamlined Sales and Use Tax Agreement. This system standardizes taxes to reduce administrative and compliance costs: It requires a single, state-level tax administration, uniform definitions of products and services, simplified tax rate structures, and other uniform rules. It also provides sellers access to sales tax administration software paid for by the State. Sellers who choose to use such software are immune from audit liability. See App. 26–27. Any remaining claims regarding the application of the Commerce Clause in the absence of Quill and Bellas Hess may be addressed in the first instance on remand.

The bottom line is that states are not now free to impose onerous burdens on out-of-state online retailers. Says the Supreme Court, “The Court will sus­tain a tax so long as it (1) applies to an activity with a substantial nexus with the taxing State, (2) is fairly ap­portioned, (3) does not discriminate against interstate commerce, and (4) is fairly related to the services the State provides.”

Using South Dakota as an example, the Court observed that, in both addition to and related to the $100,000 or 200 transactions in a year requirement of South Dakota’s law, “This quantity of business could not have occurred unless the seller availed itself of the sub­stantial privilege of carrying on business in South Dakota. And respondents are large, national companies that un­doubtedly maintain an extensive virtual presence.”

We note that many Internet business owners are already running around like Chicken Little of “the sky is falling” fame.

Really not so. Maybe not fun, maybe not welcome, but also not falling down on our heads.

You can read the full opinion in South Dakota v. Wayfair here:

Number of people who have enjoyed this article: 1,335