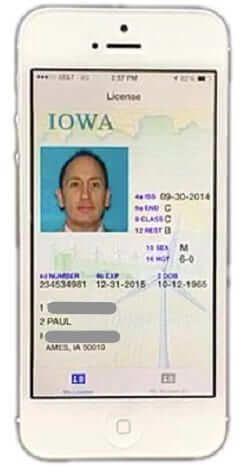 Hold on to your hats – and your phones. Some states, such as Iowa, are experimenting with digital drivers licenses which can be carried and displayed on your iPhone, Android phone or other smartphone. (Awkwardly, many schools now have a “digital driver’s license” program, which has nothing to do with driving, let alone driver’s licenses – school DDL programs are about learning how to use your smartphones and tablets).

According to Paul Trombino, Director of the Iowa Department of Transportation, there is a lot of interest in a digital driver’s license. In fact, says Trombino, “We’ve had a lot of strong interest in this. It creates quite a buzz.”

Trombino sees a lot of applications for a digital driver’s license, including having your license handy during traffic stops, and for identification purposes such as at the airport.

Of course, just because you have a digital driver’s license on your phone doesn’t mean that an airport – or anyone else asking for your ID – is going to accept it. In fact, we think we have a long way to go before authorities will accept an ID on your phone as legitimate identification.

As far as traffic stops, think about what that would look like. Because what is the first thing that a police officer does after you hand them your license and registration?

They take it back to their patrol car.

Now, you have just voluntarily handed your smartphone to a police officer. In any number of scenarios, that could qualify as your tacit agreement to the police officer searching your cell phone. In fact, the officer doesn’t even have to search your phone; they could be just holding it, looking at your license, when an instant message from your co-conspirator pops up on the screen.

While it is true that the Supreme Court has ruled that a warrant is required to search your smartphone, that was in the context of the police seizing the phone, not it being voluntarily surrendered.

We’re betting that this would be as yet untested territory, and even if you have nothing criminally incriminating on your cell phone, the stupid things that people do, without thinking, with their cellphones are legion. Take for example the guy who set his phone’s screensaver to be a picture of himself with an illegal AK-47, or any number of people who keep nude pictures of themselves on their smartphone.

Now, you can of course avoid this by still handing your physical license to the nice officer, instead of your smartphone.

It will be interesting to see whether there is broad adoption of this in Iowa when it rolls out later this year, or whether other states will follow suit.

But even more interesting will be the first lawsuits when a driver is arrested for something that a police officer found on their phone while running their digital driver’s license.

Apple Settles iCloud Storage Breach of Contract Class Action Lawsuit: You May Be Owed Money (Plus Fu...
Internet "Traveling Cloud Museum" Shines Light on the Hart Island Dead
List of Coronavirus Information Hotlines by State (Phone and Email Hotlines for COVID-19 Information...
The Spinning Disks of Internet Slowdown Day Explained
Sexual Consent Apps Cropping Up in Wake of #Metoo Movement
Explanation of What is Google LERS, Where to Find the Google LERS Portal, and How to Get Your Agency...
How to Remove Contacts from Your iPhone Sharing Menu (a/k/a the "Share Sheet")
Are You a Gig Worker or Consumer Impacted by the New Gig Work Laws? Let Us Know!
Share the knowledge

Number of people who have enjoyed this article: 1,786