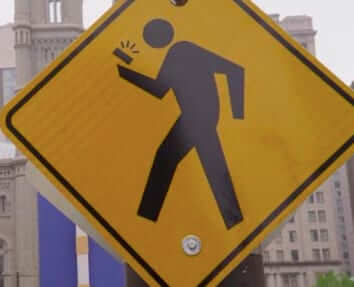 Pedestrian smartphone lanes – also known as “e-lanes”, “talkways” and “mobile phone sidewalks” – are becoming a thing, as are other measures to protect texting pedestrians from themselves, as more and more people are injured in “distracted walking” accidents.

Studies have shown that there has been a huge increase in the number of distracted walking pedestrian accidents in the last few years. A study by Ohio State [Page no longer available – we have linked to the archive.org version instead] estimates that by next year there will be 3000 or more emergency room visits as a result of distracted walking incidents in the U.S. alone.


Says doctor and professor Jack Nasar, a co-author of the OSU study, in an interview with Healthline, people who walk and text “are a hazard to themselves and others, as their distraction makes it more likely that they may walk into someone else and knock them over. One reporter who interviewed me told me that she was knocked over and injured by someone texting who bumped into her.”

According to Dr. Dietrich Jehle, a professor of emergency medicine at SUNY Buffalo (Anne’s undergraduate alma mater, by the way), people who text while walking veer off course sixty-one percent more often, and even overshoot their destination 13% more often than those who are paying attention to where they are going.

It has gotten so bad, says Jehle in the statement, “that in London, bumpers were placed onto light posts along a frequented avenue to prevent people from slamming into them.” 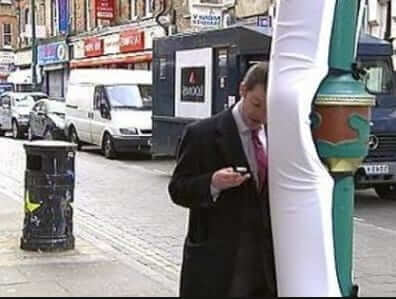 Even the U.S. Army has taken note, with an article from the U.S. Combat Readiness / Safety Center on the perils of distracted walking. 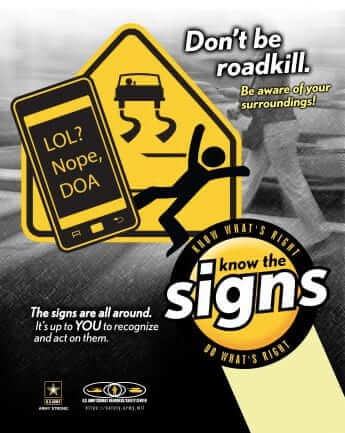 Now the city of Chongqing, in China, has created a special lane on the sidewalk for those who are texting while walking.

According to a piece in RT, the purpose of the new smartphone lane is “to give those who want to stroll at a leisurely pace and stare at their smartphones the opportunity to do so, without incurring the wrath of those wishing to get from A to B at a much faster pace.”

Nong Cheng, identified as a ‘marketing official’ with the Meixin Group, which manages Chongqing’s tourist entertainment area, told the Associated Press, “There are lots of elderly people and children in our street, and walking with your cellphone may cause an unnecessary collisions here.”

Global Comcast Outage Continues into 4th Day
Getting ‘Payment Status Not Available' on IRS Coronavirus Aid Site? What it Means and Why
Pakistan Accidentally Triggers YouTube Outage Around the World
Using Smartphones to Track People Under Quarantine
Teen Disses New Job - Gets Fired - Becomes Famous - All on Twitter
Wondering what the Heck LGBTTIQQ2SA Stand For? Here's What it Means
As More Undersea Cables are Gashed - Disrupting Internet Access to Middle East, India, Sri Lanka and...
Wireless Charging is Coming and It’s Going to be Big

One thought on “Sidewalk ‘Smartphone Lanes’ are Now a Thing”