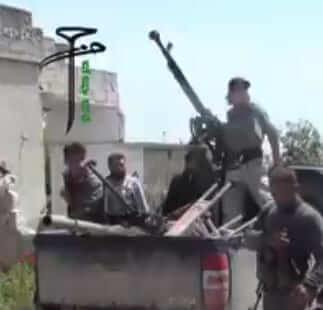 As we reported a few days ago, airlines, for example, now have full-on social media command centers. In a similar vein, the Syrian rebels have stationed what is essentially a social media team just across the border in Turkey.

As NPR’s Deborah Amos explains in a recent piece about this phenomena, on NPR, “The group Harakat Hazm – in English, the Steadfast Movement – hosted the first successful strike on YouTube. A media team documents every strike says Ahmed Abu Imad. He’s in southern Turkey to upload those videos.”

Reports Amos, “On Facebook, on Twitter and on the battalion’s website, he says. But here’s how it really works – the CIA keeps a tight rein on this covert program. Rebels say they have to document success and even bring back spent canisters from the weapons they fired before they can get resupplied.”

According to the report, the media team in Turkey is just one media hub for the Free Syrian Army.

According to Reuters, this is one of the recent videos on YouTube documenting strikes, as required by the U.S. CIA:

Social Media Command Centers the Next Big Thing in Customer Service
Social Media Uses this Trick to Extract Your Personal Data from You. DETOUR Law Would Make Using th...
Cool Photo Editing Apps That Makes Your Phone Pictures Standout
Nearly 100 Arrests Worldwide in Blackshades RAT (Remote Access Tool) Sting
What the Hell are Mukbang BJs? It's Not What You Think (or Hope)
How IoT is Taking Over the Healthcare Industry
Hackers Target WHO Amidst the Covid-19 Pandemic
Google Captures and Publishes Pic of Woman Urinating in Public
Share the knowledge