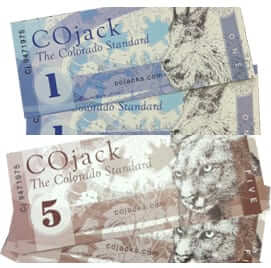 
The way COjacks works is this: The consumer buys COjacks (represented by the symbol “Cj”), and they receive more COjacks than the amount of dollars they use to buy them. So for example, $4.00 USD will buy you Cj5, or, put another way, the exchange rate is 1.25 COjacks to the dollar. However, Colorado businesses who accept COjacks will accept them at parity with the U.S. dollar, so that in essence your dollars go further by shopping at the local stores who accept COjacks.

Explains Professor Stephen J. Schmidt, in A Plain English Explanation and Definition of Local Currency and How it Works, “The reason that everyone, including your local bank, will take a $20 bill is that the US government guarantees that you can pay your taxes with it (or settle other legal debts you might have with it) and everyone has to pay taxes, and always will have to pay taxes, so everyone can always use a $20 bill for at least that purpose. Local currencies are the same basic idea – something you are willing to take in exchange for valuable goods because you think someone else will take it from you later.”

Not only is this a way to support local businesses, say the supporters of the system, but it also helps to offset the cost difference between buying local and buying at a big national chain. For example, Colorado local business Backstage Coffee in Denver accepts COjacks, so that even if their coffee might be a bit more expensive than the closest Starbucks, with your COjacks you would actually end up paying less for your morning latte, while supporting a local business.

As the COjacks organization explains on the COjacks website, “COjacks aren’t a replacement for the good ol’ green back. COjacks are a complementary currency, rather than an alternative one. This is to say that the use of COjacks integrates into the use of the dollar, pretty seamlessly for anyone who still uses cash. In fact, because the COjacks system allows for businesses to accept COjacks for different percentages of a transaction COjacks can be seen as a way of guiding dollars, and encouraging cash transactions – which keep money in the local economy. More simply stated, COjacks don’t replace dollars, they help the local economy to benefit more from dollars.”

Which is to say that Backstage Coffee may choose to let you pay for your latte with a mixture of dollars and COjacks, not necessarily with just COjacks. That decision is up to each business that agrees to accept the COjack. (See here for a list of Colorado businesses that accept COjacks.)

In addition to getting new paper currency, however, Colorado is now sporting one of the first Bitcoin ATMs (often erroneously called “ATM machines”, which is redundant, as that actually means “Automated Teller Machine machine”, but we digress).

Provisioned by Bitcoin ATM company XB Teller, the Bitcoin ATM of course does not actually dispense money at all. Instead, it converts your dollars to Bitcoins, which it then sends to your Bitcoin account (sort of analogous to sending money to your Paypal account).

Explains XB Teller CEO Noah Berger, in an interview with Colorado Public Radio, “I think calling it bitcoin to begin with was sort of a funny choice because no there are no coins at all. I think it’s just a way to invoke the image of money in people’s mind.”

So why would someone deposit their hard earned dollars into a Bitcoin teller machine to exchange them into Bitcoins? Who even accepts Bitcoins?

Actually, a surprising number of merchants, primarily online merchants with online products such as domain registrar NameCheap.com and dating site OkCupid, but also those selling real tangible products, such as OverStock.com, accept Bitcoin. (See here for a full list of merchants who accept Bitcoin [Page no longer available – we have linked to the archive.org version instead].)

If you’re in Colorado, we’d love to hear what you think about COjacks. And wherever you are, we’d love to know if you are using Bitcoin.

What is a GPO? We Explain
A Plain English Explanation of Local Currency and How it Works
Reset the Net Goes Viral with a 'Reset the Net Privacy Pack'
Getting ‘Payment Status Not Available' on IRS Coronavirus Aid Site? What it Means and Why
How to Use the Internet for Senior Citizens: a Collection of the Internet Patrol's Best Tips
Pizza Rat an Internet Sensation
More Than Half of Americans Check Email in Bed
Searchable Full Text of Whistleblower Complaint Regarding President Trump