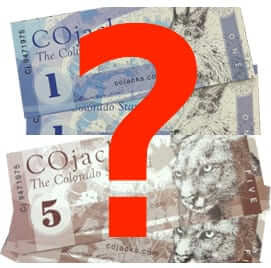 As a companion piece to our article on Bitcoin ATMs and Colorado’s new local currency, the COjack, here is a fantastic, plain English local currency definition and explanation of how local currency works, provided exclusively to the Internet Patrol by Dr. Stephen J. Schmidt, Professor of Economics at Union College in Schenectady. A huge thank you to Prof. Schmidt for this!

“Money used to be gold and silver coins, which had value because they were made of metal that had value – a $20 gold coin had $20 worth of gold in it. Any hunk of gold the same size would do just as well – the only point of making it into a coin was to guarantee that it had the proper amount of gold in it. Today we don’t use money like that anymore. We use what’s called “fiat money” – money that has little or no actual value. The value of the paper and ink in a $20 bill is just a few cents. The reason people will take a $20 bill in exchange for valuable goods like food, clothes, and books is because it has what we call exchange value – you expect that a few hours, or a few days, or a few weeks later, someone else will give you valuable goods when you give them the $20 bill. Its value derives from the fact that it can be traded for goods which have intrinsic value, and everyone knows that it can be, and everyone is pretty sure it will be accepted in the future pretty much as it is today (I say “pretty much” because we do expect prices to slowly rise over time).

The reason that everyone, including your local bank, will take a $20 bill is that the US government guarantees that you can pay your taxes with it (or settle other legal debts you might have with it) and everyone has to pay taxes, and always will have to pay taxes, so everyone can always use a $20 bill for at least that purpose.

Local currencies are the same basic idea – something you are willing to take in exchange for valuable goods because you think someone else will take it from you later. But with a local currency the US government won’t take it – local currencies get exchange value from a network of local merchants who announce that they will accept them. As long as people believe those announcements are true, and that the network will continue to exist in the future long enough for them to spend whatever local currency they accept, then they work just as well as dollar bills do as a medium of exchange. But they can’t be used far away from the network of merchants that agrees to accept them – if you take a COjack bill to New Hampshire, most people won’t even know what it is, and they certainly won’t take it from you in exchange for goods because, unless they plan a trip to Colorado soon, they can’t think of anyone who will take it from them later on. They’re only useful to people who visit the COjack merchants semi-regularly, which means people who live in the same local area as those merchants. For those people, they really are the same as dollar bills, as long as everyone expects that merchants will keep taking them. If, however, people lose that belief, and start to worry that merchants will stop accepting COjacks or other local currencies in payment for goods, then the local currencies lose their value, and whoever is holding them when the system collapses loses out.

1) Most of the people who agree to accept, and issue, a local currency do so because they say it keeps the money within the local area. If I give someone a $20 bill, they might spend it in my town, or they might fly 1000 miles away and spend the money there, in which case my area will never see that money again. If I give them a local currency, then I know that when they in turn spend it, they’ll spend it at a local business. People who do this argue that they’re stimulating the local economy by encouraging people to do business in a local currency. But there’s two problems with that argument. First, if someone wants to take money to spend elsewhere, they’re not going to accept a local currency for that transaction anyway. The only time you’ll accept a COjack in payment for something is when you expect that you’re going to want to buy something in the COjack area – but if you are going to do that, then you would have spent the $20 bill locally anyway. So a local currency probably doesn’t actually increase the amount of economic activity that stays in a local area. People don’t change their buying decisions according to what currencies they’ve just accepted – they decide what currencies to accept based on where they expect to be spending. Thus, local currencies are probably ineffective at stimulating local economies. (Not surprisingly – if they were effective for that, then local governments would be issuing them all the time, and they don’t.) Second, even if they do work, they stimulate the local economy but only by taking a transaction away from a more distant merchant. That would make moral sense only if the local merchant “deserved” this business more than the distant one did, but as a general principle that probably isn’t true. People who live near you don’t need money more than people who live far away from you – you’re just more aware of their need because you see them every day. Local currency might move transactions from one place to another, but it doesn’t actually create sales or jobs – any local sales or jobs it creates are being taken from some other place.

3) The person who really gains from the use of a local currency is the person who prints the bills. For everyone else, you get a COjack by giving away something valuable, and then when you give the COjack away, you get something valuable back – you’ve broken even on the deal. But the person who initially prints the COjack bill doesn’t have to give away anything valuable to get it. He just prints it, and when he gives it away he gets something valuable for it, at least until the bill comes back to him – which it eventually will, but not right away. Until it does, he’s got something of value (in the case of COjacks, he’s got the US dollar bills that were used to buy the COjacks) and he didn’t really have to give anything up to get it. National money works this way too – when the US government prints $20 bills and uses them to buy things, they get the same privilege. This is called “seniorage” or “seigniorage, and it’s one reason why printing money is usually (mostly) a government monopoly; it makes sure that the government, and only the government, gets the benefit of seniorage. In the case of local currencies, the merchants who issue the local currency and guarantee to accept it get the benefit of seniorage, from selling their local currency for cash. They will eventually have to repay this, by exchanging their own goods for the local currency when it returns, but not right away – and because of what we call the time value of money, they come out ahead on the deal, because they can invest and earn interest on the cash they get while they’re waiting for their local currency to return to them.”

Again, a huge thank you to Professor Schmidt for this clear explanation!

Professor Stephen J. Schmidt is a professor of Economics at Union College. His areas of expertise include economics of education, state and local government, finance, and transportation economics. We are not surprised to note that he consistantly rates a “5” (the highest rating possible) at RateMyProfessor.com.

New Wildfire Risk Assessment Tool Calculates Risk and Wildfire Risk Map for Any Address
Rosa Hoskins List of Lessons from Dad Bob Hoskins
Argentina Prez sends Tweet Mocking Chinese Pronunciation of Letter R While on Diplomatic Visit to Ch...
How to Find the Online Census, Telemedicine Online Virtual Doctors, Online Tax Filing, and Tax Filin...
Defeat by Tweet and Momentum: How to Cancel Defeat by Tweet and How to Reset Your Momentum Password
Twitter Competitor Mastodon - the New Open Source Social Network - Explained
The Social Movement Known as "Black Twitter"
What the Hell are Mukbang BJs? It's Not What You Think (or Hope)
Share the knowledge

Number of people who have enjoyed this article: 2,666