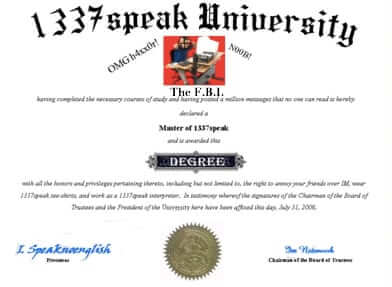 The FBI glossary of Internet slang acronyms reads like a leet speak (l337 [email protected]) primer, albeit a massively over-inclusive one. Indeed, in the time it would take an FBI agent to skim through the Internet slang glossary looking for a particular term, one would hope they could have just inferred it from context. Put together by the FBI Intelligence Research Support Unit (IRSU) and starting with ADN (Any Day Now) and ending with ZOMG (“emphasized OMG”) and ZUP (“what’s up?”), and everything in between, the FBI primer on ‘net slang is a whopping 83 pages containing nearly 3000 terms, many of them, if not most of them, not even really a thing. Although we are fond of BOGSAT (bunch of guys sitting around talking) and are now using it every chance we get.

Of course we reported on the ‘dialect’ known as netspeak or leetspeak nearly ten years ago, so it’s not as if this is a new discovery. However the FBI glossary, produced in response to a Freedom of Information request from FOI news site MuckRock, is worth reading over, if only for the sheer entertainment value. And while titled as a glossary of Twitter terms, the FBI acknowledges that these terms are also used in “instant messages, Facebook and Myspace1.”

[(1)MySpace was a service offered in the dark ages of the Internet. Recent efforts to reanimate MySpace have not been successful, although scientists are still looking at the possibility of cloning MySpace for visitors to a MySpace park.]

As Caitlin Dewey of the Washington Post points out, many of the entries in the FBI glossary are not used terribly often. Says Dewey, “ALOTBSOL”, which despite sounding like a new steroid actually stands for “always look on the bright side of life”, has been used fewer than 500 times on Twitter across Twitter’s entire eight year lifetime, and “AMOG”, which supposedly stands for the “alpha male of group” usually is actually a typo in a Spanish tweet, where the tweeter intended “amor” (love) or “amigo” (friend).

Here below are some of the other acronyms from the FBI’s glossary of Internet acronyms – can you guess what they (are said to) mean? Use them at your own risk. 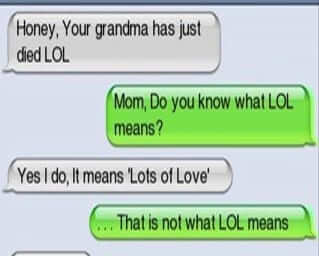 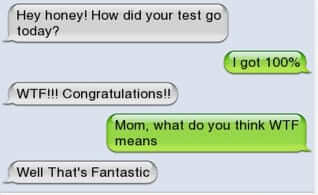 You can see the entire list of the FBI glossary on Internet slang acronyms here.

Is Pink Tech Really a Problem or Just Not a Solution?
The Truth about the FBI USPS idHSC Voluntary Fingerprint Submission Program
SXSW Debuts Robot Petting Zoo
Russian Official Tweets Racist Obama Tweet of Obamas and a Banana
Social Media Uses this Trick to Extract Your Personal Data from You. DETOUR Law Would Make Using th...
How the Internet can Help the Injured, Burned, and Orphaned Wildlife in Australia
Ford Life360 App Drive Mode Discourages Texting While Vehicle in Motion
5 Cool Google Messages Features that are Helping People Stay Connected
Share the knowledge

Number of people who have enjoyed this article: 2,972