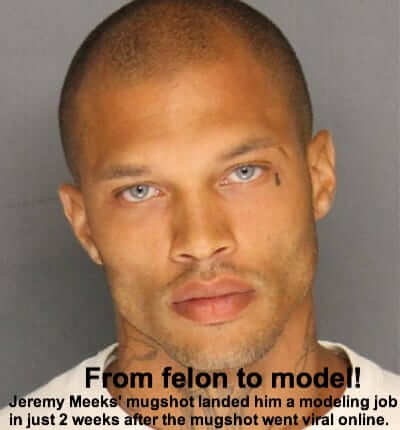 Jeremy Meeks – also known as the “Hot Felon” and the “Handsome Felon” – knows firsthand the power of social media, after his arrest mugshot went viral and led to a modeling contract less than two weeks after his arrest.

Arrested during a sting operation in Stockton, California, for gang-related activities, the 30-year-old Meeks had his mugshot posted to the Stockton Police Department Facebook page, and the rest, as they say, is history. 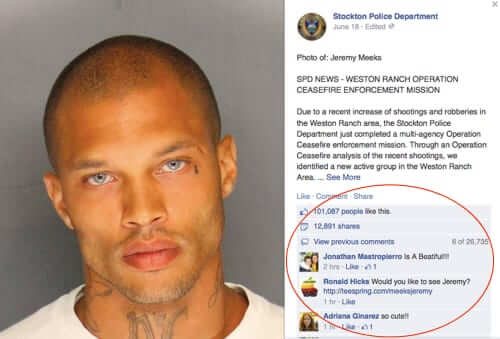 The vast majority of those comments have been things like “OMG he’s so cute!” and “Wow is he handsome”, but not everyone is quite so enthusiastic.

Said one female commenter, “This piece of low life scum is responsible for gang related activities and you stupid women want to praise him and adore him for his looks??? What the hell is the matter with you??? I hope he doesnt last in jail because he deserves to rot. Its a sad, sad world when committing crimes doesnt even matter because someone is deemed ‘attractive’ looking. **** Jeremy Meeks”

Another person who isn’t happy about all the attention is Meeks’ wife. In fact, according to an unnamed source, quoted by Sacramento CBS affiliate CBS13, Mrs. Meeks is “furious.”

Said the source, “Her man is in there, and people are taking it as a joke — thinking it’s funny — talking about his looks, saying all kinds of crazy things.”

Rodriguez told Fox news “Everybody has a story, and I, of all people, know that. The types of personalities that I work with are usually the people who are under fire by the media. If this was a different situation, like if someone was actually hurt or there was violence involved, I definitely would not be taking him on. But we don’t know Jeremy’s full story yet, and I don’t feel like he got a fair break. I really don’t. If we can help him in any way with his future and help him turn his life around, that’s what I’m about. That’s what I want to do for him.”

“We’ve spoken with four production companies and three different modeling agencies. A lot of TV shows that want to cover it, a lot of news shows. It’s just been crazy, the type of media attention that he’s gotten,” added Rodriguez.

Of course, all of this hinges on Meeks getting out on bail, which is currently set at just over $1million owing to nearly a dozen felony counts against him, including gang membership, parole violations, and firearm possession.

Ok, not quite all hinges on that. According to the GuardianLV, Meeks already has a $30,000 deal through the Blaze Modelz agency, to model for Tom Ford, the swanky line of mens clothing that is sold through upscale stores such as Neiman Marcus and Barney’s. According to the GuardianLV, Tom Ford is supplying the suits that Meeks will be wearing during his court appearances. No word yet on whether they will be using images of Meeks in court, in a Tom Ford suit, as part of their advertising campaign.

Should You Have a Social Media Prenup and Are They Enforceable?
What is "Dark Social" Media and Does it Matter?
What is Clubhouse? Easy Clubhouse Tutorial and And How to Refresh Contacts in Clubhouse so it Sees N...
Dumb Starbucks Shut Down Amidst Internet Accolades
Federal Agencies to Include Your Social Media Accounts in Security Clearance Background Check
Twitter Competitor Mastodon - the New Open Source Social Network - Explained
Check Out These 5 Apps Supporting Mental Health During the Coronavirus Pandemic
Amy Strickland - Every School Board's Nightmare or Nah?
Share the knowledge

Number of people who have enjoyed this article: 8,923