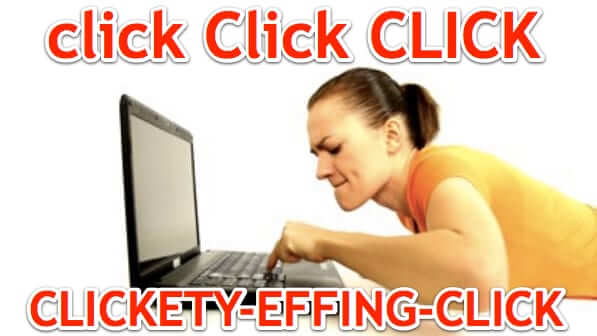 Rage clicks are the website equivalent of that person standing near the elevator and repeatedly pushing the button, as if it will make the elevator arrive more quickly, and can be the result of UI confusion, slow loading pages, link errors, and more.

Or, as the site Fullstory explains, “Rage clicks are series of clicks in which your users are pummeling their mouse buttons in frustration. It’s like punching your site in the face, usually because it’s not doing what the user wants or expects it to.”

And as Tim Rotolo of TryMyUI.com most articulately (and entertainingly) explains, “Rage clicking is a universal indicator of frustration. I’ve done it. You’ve done it. You click a button, or a link, or an image, and expect something to happen – but nothing does. As frustration and impatience mount, you click over and over again, with increasing frequency. Why? … Rage clicking can be understood as part of a broader spectrum of behavior called “computer rage” – a psychological phenomenon likely as old as the personal computer itself. Computer rage describes the verbal and physical abuse that a frustrated computer user directs at their uncooperative device. It may include exasperated muttering or cursing, mouse slamming, keyboard pounding, hitting the table with your fist, angrily slamming shut your laptop, or yelling ‘Are you freaking kidding me?'”

(Note: TryMyUI.com is a service that allows website owners to get a view into what real users coming to their site experience, with both audio and video of those users navigating the website. It’s sort of like your own personal websites focus group.)

Apparently dealing with rage clicking is all the… er … rage, as just this week Inspectlet, a service very similar to TryMyUI, announced that they too are now monitoring rage clicks for their customers.

Said Inspectlet in an email announcement of the new offering, “Inspectlet now automatically detects when users experience moments of frustration while using your site and logs them as rage clicks. A rage click is logged when a user repeatedly clicks in a non-interactive part of the page, usually indicating frustration or confusion. Common points of user rage include clicking on dead links (text that looks like a link but isn’t), clicking on images hoping to enlarge them (unsuccessfully) and other points of UI confusion.”

The thing is, while identifying the source of rage clicking can be useful for website owners, it serves no real purpose for the rage clicker, the end-user who is doing the rage clicking, other than to, perhaps, vent frustration.

True, one might say that it also serves to alert the admins of the website that there is an issue. However, we have to imagine that the number of websites that are signed up for services to actually monitor rage clicking, such as TryMyUI and Inspectlet, are in the tiny minority. Much more productive, useful, and ultimately satisfying would be to drop the admins of the site a note through their contact page, letting them know that there is a problem.

So, have you been on either the giving or receiving end of rage clicking? Even if you have not rage clicked, what issues on websites cause you to have sympathy with your rage clicking brethren?

Is It Possible to Delete Yourself From The Internet?
List of Coronavirus Information Hotlines by State (Phone and Email Hotlines for COVID-19 Information...
Should You Have a Social Media Prenup and Are They Enforceable?
Do You Have FOMO?
What is the new viral Mannequin Challenge? We explain #MannequinChallenge 2016!
Survey Finds People Prefer Text to Video - for Some Things - Which do You Prefer?
Just What is a '4 Leaf Clover Candidate'? We Explain
Bitcoin ATMs Go Online While Colorado Rolls Out Its Own Currency
Share the knowledge