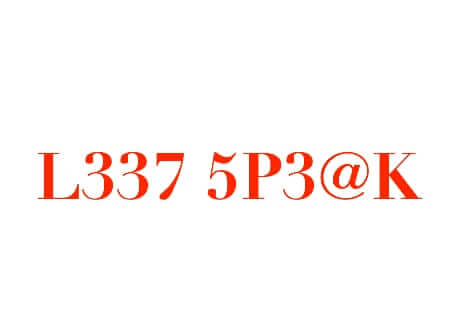 It came from the Internet and, some say, is going to destroy modern civilization as we know it. No, it’s not spam. It’s Netspeak. Also known in some circles as “L33t speak”. Of course, not all people think that Netspeak or L33t is going to destroy the world, although many think that it is rotting the brain of the millions of young (and not so young) people who are “speaking” it. But no longer a passing fad, some experts say that L33t (or “l33tspeak”) netspeak is here to stay.

Like so many other things accused of corrupting the mind, you’ll know it when you see it. And you’ve probably already seen Netspeak – in an email, coming across your cellphone, or in an IM. In fact, “IM” itself is a good example, being Netspeak for “instant message”, or “Internet message”. Often these “words” mutate from one type of word to another, as well – IM is now not only a noun, but a verb – I often IM my husband, for example (but never in public).


Borne of the desire for brevity (or perhaps laziness), Netspeak became a way to send quick messages while not having to type too much – hey, typing at the speed of speech isn’t always easy. Thus evolved such “words” as “CU” for “see you”, “BRB” for “be right back”, “TTYL” for “talk to you later”, “LOL” for “laughing out loud”, “ROFL” for “rolling on floor laughing”, “ROFLMAO”..well..you get the idea.

And then there’s “pwn” or “pwned”, pronounced “pone” or “poned”, respectively. So why is ‘pwn’ pronounced ‘pone’?

Generally it is believed that the term ‘to pwn’ was originally a perversion (or typo) of the term ‘to own’ something (after all the P is right next to the O on your keyboard). Or perhaps it also has to do with how one treats a pawn (as in the chess piece – someone you control). However it originated, to pwn something or someone is now a thing, and it means to own or control someone or something, or, to put it less delicately, to ‘make it your bitch’.

The term “L33t” itself is said to have originated specifically in the online gaming forums, where gamers fancied themselves “elite” for being able to understand their new language which replaced vowels with numbers. Hence “l33t”, as in el33t – elite.

Of course, this “language” wasn’t new at all. People with numeric pagers (that’s “beepers” for you young’uns) had been doing number-spelling for years. Even before that, I remember the joke which lead to your calculator spelling “SHELL OIL” (that’s the number 710 77345, turned upside down).

Whatever you call it, Netspeak, L33t speak, or just plain baffling, experts are now legitimizing it and saying that it’s not so bad. Says David Crystal, a language historian at the University of Wales, “Rather than condemning it, we should be exulting in the fact that the Internet is allowing us to once more explore the power of the written language in a creative way”, explaining that the Internet “is fostering new kinds of creativity through language. It’s the beginning of a new stage in the evolution of the written language and a new motivation for child and adult literacy.”

Or, perhaps, the beginning of the end of modern civilization as we know it.

List of Numbers that Telemarketers Use to Call You
The Supreme Court Cell Phone Search Decision in Riley in Plain English
FTC Sues AT and T for Throttling Data of Unlimited Data Plan Customers
Why is Adobe Flash Player Being Discontinued? We Explain
Check Out These 5 Apps Supporting Mental Health During the Coronavirus Pandemic
How To Save Online Articles To Read Later
Stingray IMSI Cell Phone Tower Emulator that Grabs All Your Cell Phone Data as You Drive By Deployed...
FCC Publishing Weekly List of Telemarketer and Robocall Numbers

VOIP 911: Weakness in VoIP 911 System Leads to Lawsuit Against Vonage