Last week Amy Strickland joined a growing number of people who have lost face, if not their jobs, owing to stupid tweeting. The Booker T. Washington assistant principal had tweeted “Every white father’s nightmare – Or Nah?” above an image of seven interracial couples – white high school girls with their African American prom dates.

Now, there is a rich and storied history of people in high positions tweeting stupid things which have gotten them into trouble.

From the Weiner Weiner, to Justine Sacco tweeting “Going to AFrica, hope I don’t get AIDS. Just kidding. I’m white!” to Russian Official (and former Olymic athlete) Irina Rodnina tweeting a picture of President Obama and a banana, people in high places have evidenced their low IQ when it comes to social media.

But Strickland, whose own two daughters attended prom with black dates, insists that the tweet was aimed at her own daughters, and intended to show not racism, but just the opposite. 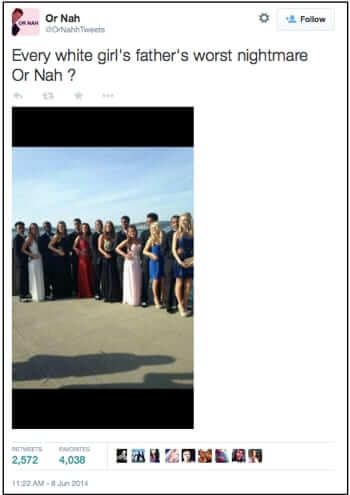 Said Strickland, in a statement through her lawyers, “Media reports suggesting that I am racially prejudiced are one thousand percent false, as my record and my many students, colleagues, friends, and family members who are African American can and, if necessary, will attest. I deeply apologize to anyone I have inadvertently offended.”

Strickland went on to say that “I have devoted years of my life to educating students in a predominantly African American school and was named Teacher of the Year for the predominantly African American Portsmouth school system last year. Partly because of my exemplary record of working well and achieving success in an urban school system, I was hired this fall as Assistant Principal at Booker T. Washington.”

And you know, we believe that in this case it’s possible that Strickland may be more guilty of lack of clue than of any malice. But that doesn’t really excuse the action, especially given her position.

Ironically, this particular tweetmine was time-delayed, triggered and exploding in Strickland’s face months after posting it in June, precisely because she had been hired on at Booker T. Washington High School.

However, students at Booker T. Washington, being curious about their new assistant principal, started poring over Strickland’s social media account after she was hired on, and the rest, as they say, is history.

As, indeed, may be Strickland.

This Monday students at Booker T. Washington staged a walkout over Strickland’s tweet, and by Tuesday the school board said they were investigating, and Strickland was put on administrative leave.

Said Michael LeMelle, a junior at Booker T. Washington, “I could have been any one of the boys in the picture. And I really don’t see myself as anyone’s worst nightmare.”

In addition, the local chapter of the NAACP is launching its own investigation. “We will not tolerate racism in this city and definitely not in the education system,” said NAACP Norfolk branch president Joe Dillard.

Quite a storm, and all because of a single tweet.

So what’s the lesson here?

Reset the Net Goes Viral with a 'Reset the Net Privacy Pack'
Twitter Goes from Favoriting with Stars to Loving with Hearts - Not Everyone Pleased
Smartphones + Mobile Apps + Adaptive Workforce = Gig Economy
Are You a Gig Worker or Consumer Impacted by the New Gig Work Laws? Let Us Know!
Getting ‘Payment Status Not Available' on IRS Coronavirus Aid Site? What it Means and Why
UK Passes Law Making Domestic Violence over Social Media a Crime
How to Use the Internet for Senior Citizens: a Collection of the Internet Patrol's Best Tips
New Online (and Offline) Dating Term Trend: Houseplanting Dating
Share the knowledge

One thought on “Amy Strickland – Every School Board’s Nightmare or Nah?”

Number of people who have enjoyed this article: 4,236