Snapchat is being sued for curating sexually explicit material and making it available to minors. The class action lawsuit against Snapchat is over the Snapchat ‘Discover’ service. Snapchat Discover curates content from “top publishers”, such as Vice, Cosmo, Buzzfeed, CNN, and People. It’s the first, Vice, among others, which has lead to this lawsuit, as Vice contains content that is clearly R (some would say X) rated, and so not suitable for children (Snapchat rates itself as being for ages 13 and up).

Explains Snapchat, of Snapchat Discover, “Whether you’re sitting on the bus trying to pass time, or you’re in the mood to cozy up next to the fire and read something entertaining … Discover has you covered! Stumble upon channels from top publishers who curate content daily, watch Live Stories from an event, or check out local Campus Stories — you’ll never get bored!” 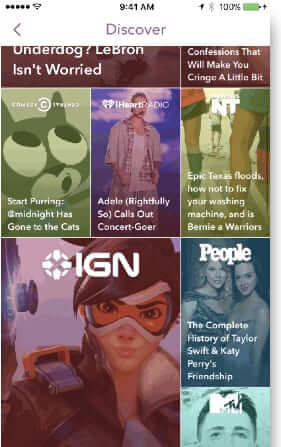 Not only won’t you get bored, but apparently you’ll get titillated by stories such as Vice Magazine’s Successful F*ck Buddies Talk About How They Kept It Casual, and I Got High, Blown, and Robbed When I Was a Pizza Delivery Guy.

(Note: The actual headline of the first story does not contain an asterisk, we added that so that search engines wouldn’t penalize us.)

And those are exactly the Vice stories that a young (14-year-old) Snapchat user happened across while using Snapchat Discover.

According to a class action John Doe lawsuit, filed by the minor’s Guardian at Litem, Lynette Young:

“John Doe is a 14 year old boy who lives in Los Angeles, California. John gets good grades. His favorite class is history and science. John looks forward to attending college.

Like most of his friends, John recently joined the “Snapchat craze.” John uses his account on Snapchat as his primary method of communicating with friends. John has fun posting pictures of himself using features from Snapchat’s facial recognition technology. John also uses the video chat feature on Snapchat to stay connected with friends and relatives.

On July 1, 2016, John was exploring Snapchat Discover when he came to an article posted by Snapchat and its media partner Buzzfeed which had pictures of his favorite Disney characters including those from movies he grew up with. However, something was obviously wrong and different with these images. The compilation of Disney images John accessed included pornographic text and innuendo next to the photographs. In fact, the photographic compilation was called: “23 Pictures That Are Too Real If You’ve Ever had Sex With A Penis.” {Emphasis added.}

The pictures contained the captions: “When he pulls down his pants it’s more beautiful than you could have imagined,” “When he came way harder than you expected,” “When he aims for your face but you have to protect your eyes,” “When he proceeds to get it all over your face . . .and clothes,” and “When he unexpectedly slaps your face with his penis.”

Here is a sampling of the “Disney images” John saw: 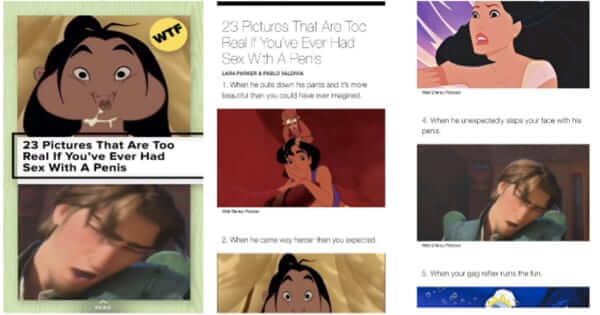 As the lawsuit further states, “Plaintiff John Doe, and the putative class of minors, are undoubtedly interested in discovering new things on Snapchat. However, the decision to discover explicit adult material is not one that should be made for minors by Snapchat.”

Snapchat has not responded publicly other than to say, last week, before they were served with the lawsuit, that “We haven’t been served with a complaint in this lawsuit, but we are sorry if people were offended. Our Discover partners have editorial independence, which is something that we support.”

You can read the full John Doe v. Snapchat here.