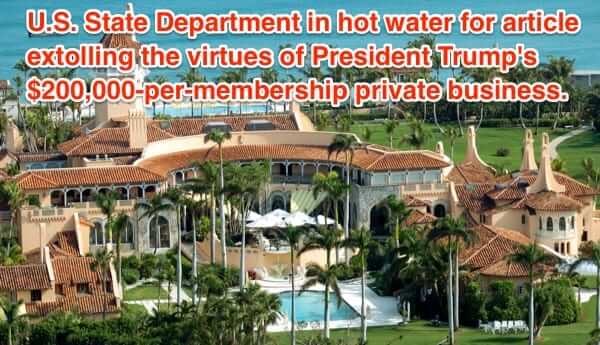 Earlier this week the U.S. State Department wrote a love letter to President Trump’s Mar-a-Lago (pronounced “maralago” – yes, that does mean “sea to the lake” – hey, we didn’t name it) and posted it to their blog. They quickly got into hot water for shilling for Trump’s business – but not before several other government sites had picked up and published the article. That blog post has now been removed from all public sites – but we have it here for you in case you were curious as to what the brouhaha is about.

The article showcasing Mar-a-Lago was posted to the U.S. State Department’s Share America site. According to their site:

ShareAmerica is the U.S. Department of State’s platform for sharing compelling stories and images that spark discussion and debate on important topics like democracy, freedom of expression, innovation, entrepreneurship, education, and the role of civil society.

The ShareAmerica team is part of the Bureau of International Information Programs, which works with U.S. embassies and consulates in more than 140 countries to engage with people around the globe on U.S. foreign policy and American society.

Well, they certainly sparked discussion when they posted what was essentially a multi-page advertisement for the President’s high-end resort. In fact, despite all of the government agencies pulling the article from their websites, Mar-a-Lago is in the news now more than ever!

It’s also interesting to note that immediately following his election, this property of Mr. Trump’s doubled its membership fee from $100,000 to $200,000, according to the New Jersey Herald.

For its part, a spokesperson for the State Department said that nobody had been ordered to write and post the piece, and that, somewhat shockingly, the article was not reviewed before it was posted.

“In retrospect, we made the decision to pull this article down because there was some confusion about its intent, but their mandate, if you will, is to create content that educates foreign audiences about significant landmarks, etc., in the United States” said the State Department spokesperson.

A statement on the State Department’s website about the issue says:

“The intention of the article was to inform the public about where the president has been hosting world leaders. We regret any misperception and have removed the post.”

That statement is at https://share.america.gov/mar-a-lago-winter-white-house/, having replaced the original article.

However we have the original article, and here it is:

The first meeting between Trump and President Xi Jinping of China will take place April 6–7 at Mar-a-Lago, which is located at the heart of Floridas Palm Beach community.

Trump is not the first president to have access to Mar-a-Lago as a Florida retreat, but he is the first one to use it. By visiting this winter White House, Trump is belatedly fulfilling the dream of Mar-a-Lagos original owner and designer.

The living room of the Mar-a-Lago estate. (Getty Images/Davidoff Studios)

When socialite and cereal heiress Marjorie Merriweather Post built Mar-a-Lago — Spanish for “Sea to Lake” — in 1927, she spared no expense. The 114-room mansion sits on 8 hectares of land, with the Atlantic Ocean on one side and an inland waterway on the other.

The ornate Jazz Age house was designed with Old-World Spanish, Venetian and Portuguese influences and decorated with Posts personal collection of antiques.

Mar-a-Lago was designated a National Historic Site in 1969 in recognition of its design and architecture. Three years later it was entered into the National Register of Historic Places, a list of sites the U.S. deems worthy of preservation.

But Post had even bigger plans for her Palm Beach home. Upon her death in 1973, she willed the estate to the U.S. government, intending it to be used as a winter White House for the U.S. president to entertain visiting foreign dignitaries.

Her plan didn’t work, however. Presidents Richard Nixon and Jimmy Carter never used the property. And in 1981 the government returned the estate to the Post Foundation because it was costing too much money to maintain.

That opened the way for Trump, a real-estate magnate, to purchase the property in 1985. When he acquired the house, Trump also bought the decorations and furnishings that Post had collected over the years, preserving Mar-a-Lago’s style and taste.

Tables are set for a luncheon in a ballroom at the Mar-a-Lago. (Getty Images/Davidoff Studios)

After refurbishing the house and adding an events space, Trump opened the estate to dues-paying members of the public in 1995 as the Mar-a-Lago Club.

Posts dream of a winter White House came true with Trumps election in 2016. Trump regularly works out of the house he maintains at Mar-a-Lago and uses the club to host foreign dignitaries. (In February, Japan’s Prime Minister Shinzo Abe and his wife, Akie, visited.)

The Metaverse — Part 2: Imagining a Modern Metaverse
Burgler Uses Victim's Computer While in Home: You Won't Believe What He Did Next!
Yes, Facebook's Data Mining is a Problem
How to Identify False Information Online
Comcast Requires NDA Before Giving Customer Refund
Scam calls 101
Fugitive Arrested After Commenting on His Facebook Wanted Poster
Argentina Prez sends Tweet Mocking Chinese Pronunciation of Letter R While on Diplomatic Visit to Ch...
Share the knowledge

Number of people who have enjoyed this article: 362