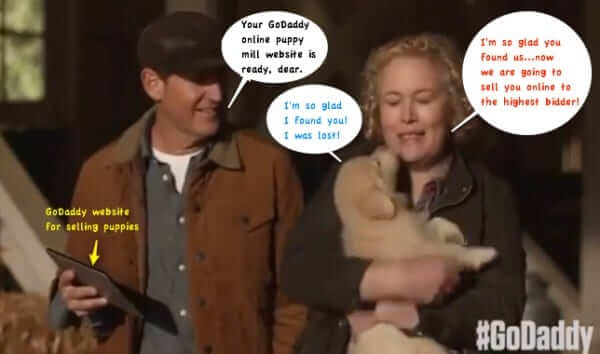 GoDaddy’s 2015 Superbowl commercial featuring a lost puppy named Buddy has been pulled from the Superbowl XLIX lineup over controversy and howls of outrage from animal lovers and animal rights activists.


GoDaddy: The registrar of choice for puppy mills and backyard breeders everywhere.

The issue with the GoDaddy ‘lost puppy’ commercial boils down to this: three puppies are in the back of a moving pickup truck, and one of them, Buddy, falls out (landing safely in some grass). He crosses railroad tracks, runs along roads, and across bridges, to find his way home. Your heart has been tugged, you cheer for Buddy. And then you see and hear a woman delightedly say “It’s Buddy! He found his way home!… and just in time, because I just sold you on this website that I created with GoDaddy.”

Turns out that the couple driving the truck is a pair of puppy breeders. Whether backyard breeders or puppy mills, that’s just not a cool ending to this story. And most especially given that the commercial was a tacit endorsement of selling pets online, something which even most breeders themselves reject as a very bad practice.

The ad, called “Journey Home”, was created by advertising agency Barton F. Graf, which shows that not one, but two major corporate entities had a stunning lack of clue, Barton F. Graf for suggesting the commercial, and GoDaddy for approving it.

Of course, GoDaddy is no stranger to controvery and censure. From cries that their advertising is sexist, often featuring sexbomb female race car driver Danica Patrick, to the outrage over (former, but current at the time) GoDaddy CEO Bob Parson killing an elephant, GoDaddy has often been reviled, and for a long time didn’t seem to care. In 2013, GoDaddy replaced Parsons as CEO with Blake Irving, who seems to have a softer, or at least less controversial, and more CEOly side.

And a good thing too, given this current tempest. 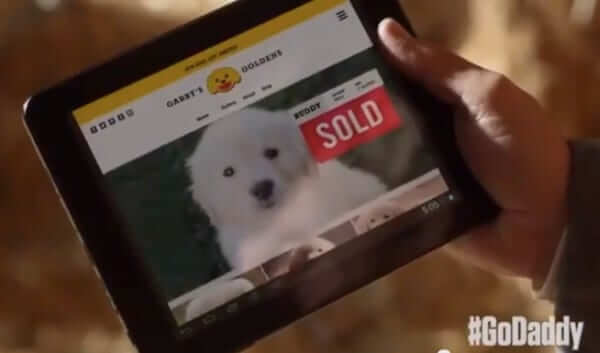 Said Irving of the commercial, in a corporate mea culpa, “This morning we previewed GoDaddy’s Super Bowl spot on a popular talk show, and shortly after a controversy started to swirl about Buddy, our puppy, being sold online. The responses were emotional and direct. Many people urged us not to run the ad,” adding that “At the end of the day, our purpose at GoDaddy is to help small businesses around the world build a successful online presence. We hoped our ad would increase awareness of that cause. However, we underestimated the emotional response.”

In the statement, Irving then goes on to reassure that, “Finally, rest assured, Buddy came to us from a reputable and loving breeder in California. He’s now part of the GoDaddy family as our Chief Companion Officer and he lives permanently with one of our longtime employees.”

Buddy even has his own news release of his joining the GoDaddy team as the Chief Companion Officer.

Burgler Uses Victim's Computer While in Home: You Won't Believe What He Did Next!
Yes, Facebook's Data Mining is a Problem
The Metaverse — Part 2: Imagining a Modern Metaverse
San Francisco: Thousands Eligible for Parking Fine Rebate - Full Searchable Text of List of Names a...
AT&T, Sprint, T-Mobile, Verizon Down Across U.S. - March 31, 2020
Why are Airlines and Others Concerned about 5G? Here's Our Plain English Explanation
ShutterFly Delivers Bundle of New Baby Spam
Massive CenturyLink Outage is Nationwide on December 27 2018
Share the knowledge

Number of people who have enjoyed this article: 3,593