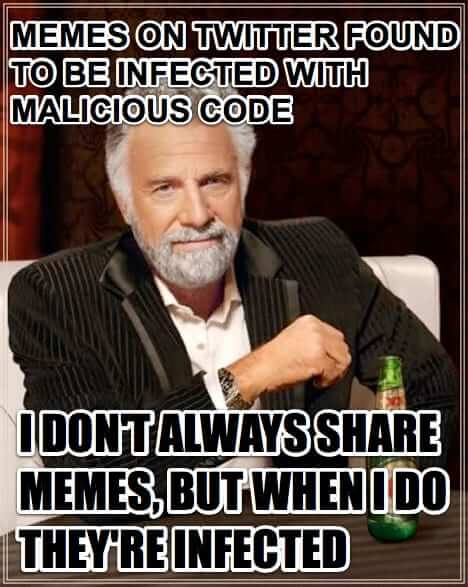 Memes. They’re cute. They’re funny. And they’re infected. That’s what researchers are saying about memes posted on Twitter from a particular account. The memes had commands embedded in their code, so that to look at the meme it looked normal, but when a computer infected with the particular malware encountered the meme, it would read the command and then execute it.

For example the code “/print” was embedded in the memes, which would cause the infected computer to take a screenshot.


In explaining the malicious memes, Hacker News said “Besides taking screenshots, the malware can also be given a variety of other commands, such as to retrieve a list of running processes, grab the account name of the logged in user, get filenames from specific directories on an infected machine, and grab a dump of the user’s clipboard.”

Once the computer executed the commands, it would pass the results back to the bad guys.

The technique of hiding malicious content within the code of a digital image is known as steganography. Steganography has been around, and used by cyber criminals, for a while, however using it in this way – to embed commands in an image on social media, and to have the infected computers call home to the images in a particular Twitter account to get their orders, is new.

Said the researchers who discovered it, “This new threat is notable because the malware’s commands are received via a legitimate service (which is also a popular social networking platform), employs the use of benign-looking yet malicious memes, and it cannot be taken down unless the malicious Twitter account is disabled.” 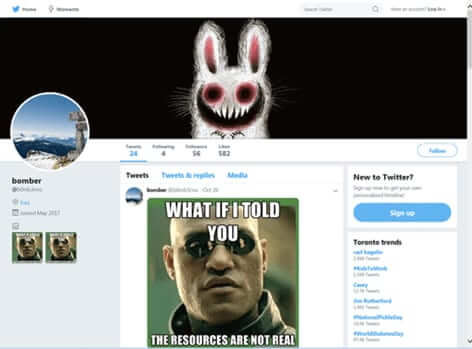 The good news is that the infected memes were coming from one particular Twitter account, which Twitter has now shut down, and at the time there were only two such memes in the account, which were posted in October.

The bad news is that you can certainly expect more of this sort of exploit. And by having one component of their scheme resident on a public platform like Twitter, the bad guys have the advantage that nobody is going to shut Twitter down, like they would a private malware server.

If you think that your computer may have become infected, there are instructions for removing TROJAN.MSIL.BERBOMTHUM.AA here

Massive Breach Exposes Hunting and Fishing License Data in Idaho, Oregon, Washington and Kentucky
1-800-FLOWERS Data Breach Second Breach Revealed for December 2018
Woo Themes Hacked, Credit Card Numbers Stolen
Federal Agencies to Include Your Social Media Accounts in Security Clearance Background Check
The Social Movement Known as "Black Twitter"
Why is Everyone Talking about Leaked Nude Celebrity Selfie Pictures?
Never Heard of People Data Labs? They've Heard of You, Likely Have Your Data and It Was Exposed in a...
Target CEO Admits that Target Knew of Breach 4 Days Before Disclosing It
17shares

One thought on “Memes Shared on Twitter Infected with Malicious Code”