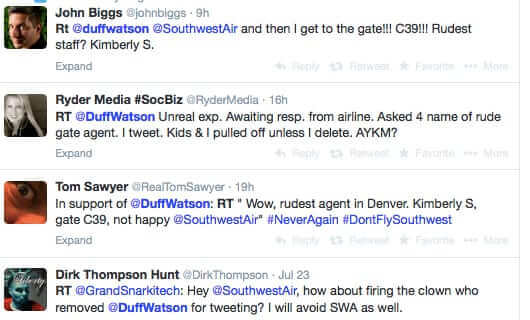 A Southwest airlines (SWA) gate agent took exception to being called “the rudest gate agent”, and so flexed her tiny muscles by having a passenger and his children thrown off the flight for tweeting his displeasure, even after he had deleted the tweet, as gate agent Kimberly S. had demanded.

Duff Watson is an A-list passenger on Southwest (SWA). A-list passengers get priority boarding on Southwest, and so because he had his two minor children with him, he’d imagined that they would be able to board with him (because, you know, they are minors, aged 6 and 9).

However Southwest Gate Agent Kimberly S. of, we are ashamed to say, Denver, told Watson in no uncertain terms that his minor children would have to wait to board with the rest of the non-A-List passengers.

As Watson told CBS News, as he was leaving Kimberly S., gate agent, he told her “Real nice way to treat an A-list. I’ll be sure to tweet about it.”

And that’s just what [Page no longer available – we have linked to the archive.org version instead] did, tweeting “Wow, rudest agent in Denver. Kimberly S, gate C39, not happy @SWA.”

Gate agent Kimberly demanded that Watson delete the tweet, telling him that he couldn’t board the plane unless he deleted the tweet!

And, despite Watson deleting the tweet, the next thing he knew, he and his children were thrown off the plane.

Watson explain that Kimberely S. said that “her safety feels threatened at this point because of what I tweeted.”

Watson’s daughter Lucy was scared too. She told CBS News that gate agent Kimberly threatened to call the police. “I like thought something bad was going to happen, like my dad being in jail,” said Lucy.

That is when Watson’s two children started to cry.

Clearly Kimberly S.’ reaction was way over the top, and her actions an abuse of gate agent power.

“There was no use of profanity, there were no threats made. There was nothing other than, you know, a terse exchange between a customer service agent and a customer,” says Watson.

Southwest sent an apology to Watson, with three vouchers for $50.00, but, says Watson, he will never fly Southwest again.

Memes Shared on Twitter Infected with Malicious Code
Should You Have a Social Media Prenup and Are They Enforceable?
How to Send Group Messages on Twitter
UK Passes Law Making Domestic Violence over Social Media a Crime
Argentina Prez sends Tweet Mocking Chinese Pronunciation of Letter R While on Diplomatic Visit to Ch...
The Metaverse — Part 2: Imagining a Modern Metaverse
Cool Photo Editing Apps That Makes Your Phone Pictures Standout
ShutterFly Delivers Bundle of New Baby Spam
Share the knowledge

Number of people who have enjoyed this article: 2,377