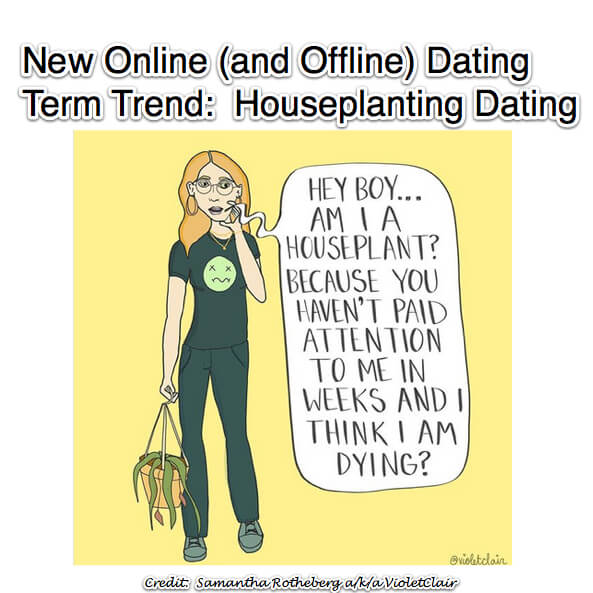 Move over kittenfishing, mosting, and paperclipping, the new dating term is Houseplanting. Houseplant dating is basically when you date several people at once, leading to one or more of them not getting ‘watered’ (i.e. the attention they feel they deserve).

The term, and concept, were first introduced to the world by Samantha Rothenberg (as was, in fact, the term ‘paperclipping’), on her Instagram account under the pen name VioletClair. Rothenberg, a comic illustrator by trade, posted this on Instagram last week:

Now, nowhere on her Instagram feed, nor elsewhere that we could find, did she actually articulate what she meant by ‘Houseplanting’ – if she meant it at all. It was, in fact, her followers who coined it as a term. 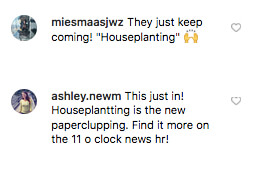 Still, that didn’t stop it from capturing the attention of a broader audience, and so “houseplanting”, or “houseplant dating” (or even ‘houseplanting dating’) was born. Nor did it stop others from defining it for Rothenberg and her followers.

D’Marge, which calls it self a “playbook for the modern man”, defines houseplanting as The Rudest New Hook Up Trend That’s Also Irresistible.

Says D’Marge author James Booth, in his article, that “unlike paperclipping or ghosting — houseplanting could actually help you find a serious relationship (even if it is quite rude).” He then goes on to explain that by dating several different people at once, you can more readily find ‘the one’, but cautions to be up front about it with the people you are dating.

Of course, dating several people at once isn’t really a new trend. In fact it’s often what leads to ghosting, which is when someone just disappears after one or more dates. Mosting is essentially the same thing, only the person leads you to believe that you are their most important (if not only) one, and then they disappear.

These are all different from catfishing and kittenfishing, which is when someone pretends to be a completely different person, or they pretend they are ‘better’ than they really are, respectively.

Anyways, back to ‘houseplanting’ which, as far as we can tell, is basically just another term for ghosting, unintentionally started by a few of VioletClair’s followers, who lobbed a comment ball that D’Marge picked up and ran with.

Curiously (or not so much), we just yesterday wrote about the phenomena of how something that’s not a real thing can take on a life of its own on the Internet, and turn into a thing, when we wrote How a Meme Goes Viral, Takes on a Life of Its Own, Becomes Fake News and then Real: a Cautionary Tale

And, oh yeah, paperclipping came from another illustration by Rothenberg on her VioletClair site, harkening back to Clippy, the least appreciated of the Microsoft mascots:

Administration's New Disinformation Governance Board Confirmed During House Hearing
Just in Time for Black Friday and Cyber Monday Our Readers Share Their Top Holiday Gift Ideas
How to Cancel a Bumble Boost (Premium) Account
Have You Been Kittenfished? The Difference Between Catfishing and Kittenfishing
Have You Been Ghosted by Someone with Whom You had a Date? Why do People Ghost?
What does "Enemy" Mean on OK Cupid?
The Spinning Disks of Internet Slowdown Day Explained
Bitcoin ATMs Go Online While Colorado Rolls Out Its Own Currency
Share the knowledge

Number of people who have enjoyed this article: 1,319