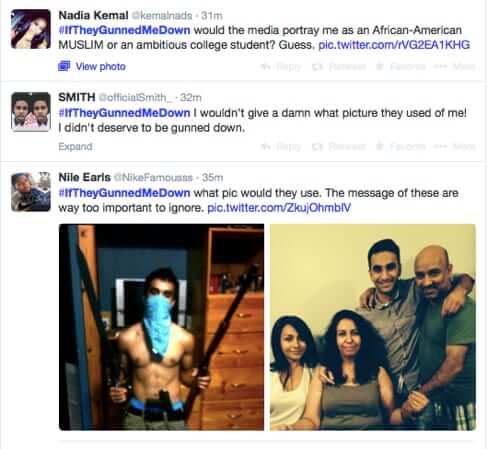 Black Twitter’s power has risen in public awareness with the proliferation of the hashtag #IfTheyGunnedMeDown, following the killing of unarmed teen Mike Brown by a police officer in Ferguson, Missouri. But while people are talking about it a lot now, #BlackTwitter has been around for a while.

Blogger and social activist Feminista Jones, in a 2013 article in Salon, describes Black Twitter as “a collective of active, primarily African-American Twitter users who have created a virtual community that participates in continuous real-time conversations.”

However, says Jones, creative use of ‘alternative’ communication mediums is nothing new, pointing out that “Centuries ago, newly captured African slaves were separated from those who spoke their native languages to discourage organized attempts at escape. For them, finding universal means of communication, like “spirituals” or “work songs,” became essential to their survival and that of future generations.”

Says Jones, Black Twitter is simply another manifestation of that ingenuity.

The term “Black Twitter” is generally agreed to have first been used by journalist and The Awl founder, Choire Sicha, in his 2009 article What Were Black People Talking About on Twitter Last Night?.

The current example of Black Twitter taking to, well, Twitter, arose over objections to NBC’s use of a picture of shooting victim Michael Brown that, commentators say, made him look menacing.

In an NPR interview one such commentator, Brittany Gault, explains that “It almost looks like this person should’ve been hunted down. He doesn’t look like someone that is the sweetheart boy that just graduated high school who had a reputation in his community for being a good guy.”

In an effort to express their outrage, black and other Twitter users started posting side-by-side pictures of themselves, one in which they arguably look menacing, next to another showing them with their families, or in military uniform serving their country, with the hashtag #IfTheyGunnedMeDown.

The point being, say observers, to challenge NBC’s portrayal of Brown, and the media in general overly-portraying young black people as ‘menacing’.

In fact, after the #IfTheyGunnedMeDown groundswell, NBC pulled the image of Brown that so many found objectionable.

Elected Official Puts the "Weiner" in, Uh, Weiner
The Phone Privacy Handbook: How to Make Your Phone Location Nearly Impossible to Track
Facebook Post Sends Martin Shkreli to Jail
Can Your Car be Hacked through its Onboard Wireless?
Are You a Gig Worker or Consumer Impacted by the New Gig Work Laws? Let Us Know!
Full Text of Alexander Vindman’s Prepared Testimony Before the House Intelligence, Oversight and Ref...
Reset the Net Goes Viral with a 'Reset the Net Privacy Pack'
What Does Deplatforming Mean? And is Deplatforming Legal? Here's the Info
Share the knowledge

Number of people who have enjoyed this article: 2,113