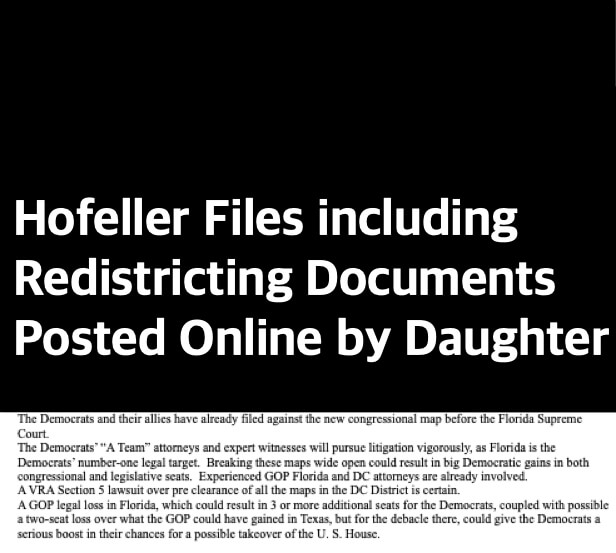 Tom Hofeller’s daughter Stephanie has given the public a huge “you don’t have to bother with a FOIA request” gift, and arguably a big middle finger to her deceased father, by putting all of Thomas Hofeller’s hard drives, files, and documents online, accessible for all to see. Stephanie found these hard drives, thumb drives, and documents when visiting her parents’ home shortly after her father’s death. She has a background in, among other things, IT, and so it was not difficult for her to realize what she had, and how to share it.

The files includes not only the infamous GOP redistricting tactic files, but even the legal and ancillary documents related to Hofeller’s largely successful efforts to gain custody of Stephanie’s children, as well as information about her stillborn son Milan, whose death was used as “evidence”.

They also number in the tens of thousands (link to the full trove of files below). 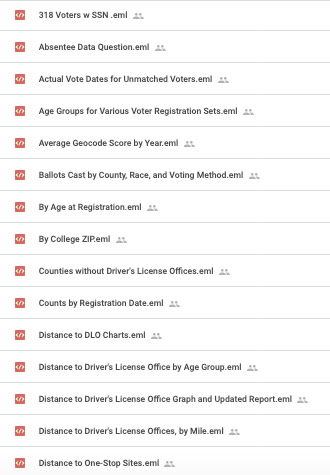 These include the files that Republican lawmakers in North Carolina sued to keep private. They include not only redistricting maps and spreadsheets, but also Hofeller’s email and reports, some with interesting reveals.

Not surprisingly, many, many of the documents deal with redistricting tactics. Or gerrymandering tactics, depending on how you see it. (The difference between ‘redistricting’ and ‘gerrymandering’ is largely one of intent: Redistricting is a agency-monitored process to make sure that congressional districts and representation keep pace with changes in population distribution; gerrymandering refers to the redistricting process with the specific intent to unfairly weaken the vote of particular groups or classes of people.)

For example, one representative document focuses on minority districts in Alabama:

The State of Alabama has 35 State Senate and 105 State House districts, all single-member.

The Enacted State Senate Plan contains 8 African-American districts ranging from 50.00% to 73.35%. There are no other districts under 50% Non-Hispanic White.

The Sanders State Senate Plan contains 8 African-American districts ranging from 50.00% to 69.91%. There are no other districts under 50% Non-Hispanic White.

The Reed-Buskey State Senate Plan contains 8 African-American districts ranging from 50.00% to 66.75%. There is one additional district under 50% Non-Hispanic White.

The Enacted State House Plan contains 27 African-American districts ranging from 50.00% to 74.83%. There is one additional district under 50% Non-Hispanic White.

The Reed-Buskey House Plan contains 27 African-American districts ranging from 50.00% to 73.10%. There are no other districts under 50% Non-Hispanic White.

The Knight House Plan contains 27 African-American districts ranging from 50.00% to 82.48%. There are no other districts under 50% Non-Hispanic White.

The McClammy State House Plan contains 27 African-American districts ranging from 50.00% to 73.87%. There are no other districts under 50% Non-Hispanic White.

All Plans are at proportionality (rounded up for the House and down for the Senate).”

In another, titled “Florida Redistricting Bullets”, Hofeller observes that:

• Legislative plans are enacted by resolution.  Congressional plans are enacted by statute.  New criteria were imposed by constitution amendments (Props. 5 and 6), which could give FL Supreme Court more leeway to inject itself into the process (not considered a court favorable to the GOP).

• GOP stakeholders filed lawsuits challenging the amendments, but the DOJ has precleared the amendments. The case was dismissed, and the dismissal was upheld on appeal.

• GOP will, however, drafted all the lines, but under stricter criteria.

• Plans could not have been enacted until after January 1, 2012.

• One of the big issues was be the conflict between the new Florida criteria and the maintenance of Democrat Brown’s (3rd District) as a majority-minority district. Keeping that seat as a minority district helps the GOP. That seat is not protected by Section 5 of the Voting Rights Act.

• The Legislature elected to draw the 3rd District as a majority minority district.

• The legislative maps will be automatically reviewed by the Florida State Supreme Court and a hearing was held on February 29th.

• The Democrats and their allies have already filed against the new congressional map before the Florida Supreme Court.

• The Democrats’ “A Team” attorneys and expert witnesses will pursue litigation vigorously, as Florida is the Democrats’ number-one legal target. Breaking these maps wide open could result in big Democratic gains in both congressional and legislative seats. Experienced GOP Florida and DC attorneys are already involved.

• A VRA Section 5 lawsuit over preclearance of all the maps in the DC District is certain.

• A GOP legal loss in Florida, which could result in 3 or more additional seats for the Democrats, coupled with possible a two-seat loss over what the GOP could have gained in Texas, but for the debacle there, could give the Democrats a serious boost in their chances for a possible takeover of the U. S. House.”

Efforts to Get the Citizenship Question on the U.S. Census

While there are hundreds of documents that provide evidence of political gerrymandering (after all, Hofeller was a Republican redistricting expert), the most legally interesting evidence the files provide relates to the push to include a citizenship question on the census, and the reasons for it.

In one report, for example, Hofeller concludes:

“A shift from a redistricting population based determined using total population to adult population is radical departure from the federal “one person, one vote”ule presently used in the United States.

Without a question on citizenship being included on the 2020 Decennial Census questionnaire, the use of citizen voting age population is functionally unworkable.

The Obama Administration and congressional Democrats would probably be extremely hostile to the addition of a citizenship question on the 2020 Decennial Census questionnaire.

The chances of a U. S. Supreme Court’s mandate to add a citizenship question to the 2020 Decennial Census are not high.

A proposal to use CVAP {Ed. note: Citizen Voting Age Population} can be expected to provoke a high degree of resistance from Democrats and the major minority groups in the nation.” 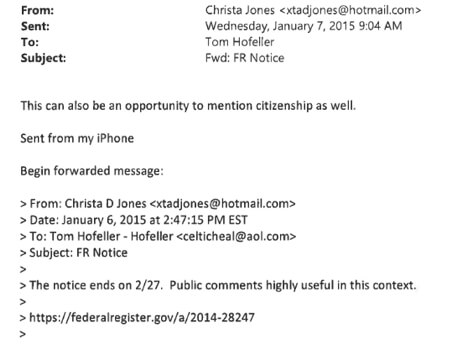 Then there is this curious file of what are clearly websites targeted for acquisition and acquired, along with their strategic value, and even within these descriptions there are strategies to be gleaned:

Checkmate2010.com (acquired)  Stakes of 2010 Elections, Campaign Finance Changes, Census and Redistricting have set the stage for foundational partisan and ideological battle royale. Background research and story for researchers & analysts.
[Note: This was brand mentioned by John Sununu at RNC Meeting to investigate left wing campaign finance investments in capturing state legislative chambers; also MI Committeewoman Holly was involved, but nothing came of it].
Advertising to send to other partner websites for expertise/consult

LongTailPolitics.com (acquired)  The application of “The Long Tail” theory (book by Chris Anderson) in which the decline of brick and mortar stores coincided with the cheap availability of internet search websites and marketing: Individual preferences are much more vast and fewer units purchased/sold in contrast to big box marketing of smaller variety of goods. Provides framework for decline of Political Parties and rise of fringe interest group politics as a result of BCRA & other “reforms”. Potential outlet for academic studies or opinion pieces.

Corporate entity needed for retirement account tax advantages (401k Roth), Medical (?), Insurance Policy, maximize deductibility of expenses, shifting of fiscal year, and ability to contract with non-profit entity, or serve as management company for non-profit. Also serve as vehicle to form partnerships with other entities. Access to capital is possible from existing IRAs with proper paperwork.
MTW alone cannot execute and deploy on all of these ideas, but needs to form strategic partnerships with others to make maximization possible.

Hofeller and His Daughter Stephanie

For those more inclined towards the lurid – and it has to be said, heartbreaking – personal details of Hofeller’s relationship with his daughter, while there are dozens of documents detailing her allegedly abusive marriage, and Hofeller’s efforts to remove her children from her, we won’t recount them here. Rather, let us share this one telling file of Hofeller’s personal notes when he was clearly interviewing family law attorneys:

You can access the entire set of the Hofeller files here, at least until someone finds a way to shut it down.

Online Petition asks Starbucks to Bring Back Scones
Scientists Prove Digital Brain to Brain Thought Communication Over the Internet
Pedestrian Struck and Killed by Self-Driving Car
Pizza Rat an Internet Sensation
Online Therapy Catching On with Online Therapists, Counselors, and Free Listeners
This One Simple Trick Will Reclaim Your Time and Reduce Your Stress
Online Full Text of Michael Cohen's 2/27/19 Testimony Before the Committee on Oversight and Reform
Internet addiction: Is it Time to Unplug?
Share the knowledge

Number of people who have enjoyed this article: 905