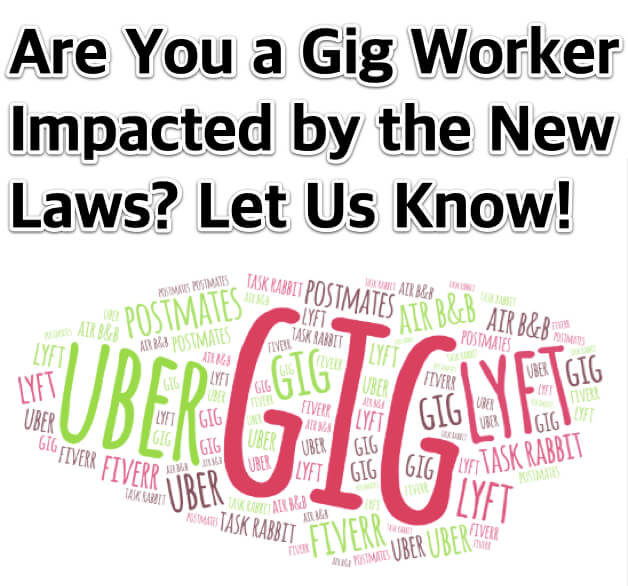 Uber, Lyft, PostMates and DoorDash gig workers, among others, are all covered by California’s new gig worker law, AB5, which into effect last week on January 1st, 2020. In a nutshell, California’s new law, which amends California labor law and related laws, attempts to reclassify gig workers, independent contractors, and freelancers, as employees.

So, for example, for someone gigging for Uber to not be considered an employee of Uber, they would not only have to be completely free from any direction from or control by Uber (whether that is the case is open to interpretation), the service they provided to Uber would have to be something they were already doing in business prior to providing that service to Uber (possible, maybe they had a limo business), and, and here is the catch 22, they would have to not be driving for Uber (because that is Uber’s usual course of business).

Proponents of the new gig worker law point out that being reclassified as an employee provides a gig worker with protections such as minimum wage, access to unemployment, and other rights, and requires the companies for whom they work to pay into the unemployment system for them, as well as SSI and other taxes. Opponents point out that this will result in a reduction in the number of gig jobs available, as companies will suddenly find each gig worker to become a financial and accounting burden, rather than an asset.

Already this has directly impacted thousands as, for example, Vox Media let hundreds of freelance journalists go as a direct result of AB 5, and earlier this week a Federal judge refused to block the law as it pertains to freelance journalists. Elsewhere, a different Federal judge blocked enforcement of AB 5 against motor carriers. Meanwhile, Uber and Postmates have sued to stop the law, claiming that it is unconstitutional.

Then there is Uber’s not-so-secret Project Luigi, which is bringing a California-specific Uber app to drivers which includes, among other things, the ability for a driver to reject a trip without penalty (which, Uber hopes, will help get them out from under the “free from direction from and control by the company” part of the tests in AB 5).

But how do the gig workers feel? We know that lousy pay and no benefits, as well as in some instances lousy treatment, has been an issue for some gig workers. But that isn’t to say that all gig workers are happy about being automatically reclassified as employees. For example, the freedom to make one’s own hours is not something they want to lose.

And, while the new law impacts both the gig workers, and the companies for whom they work, it can also affect consumers who use such gig services as Uber, Lyft, DoorDash and others. Some of the ways this may affect consumers include an increase in fees for gigged services, and a reduction in availability of those services in their area.

So, are you a gig worker or consumer who has already been impacted or seen affects of this new law? If so, let us know!

(If you are so inclined, you can read the full text of the California Gig Worker Law AB 5 here.)

5 Cool Google Messages Features that are Helping People Stay Connected
Full Text of Dr. Rick Bright Whistleblower Complaint Against DHHS Over Coronavirus Handling and Push...
Xbox Pizza Hut App Raises Millions in New Business for Pizza Hut
No Warrant Necessary for Law Enforcement to Access Data Stored in the Cloud
Online Full Text of Michael Cohen's 2/27/19 Testimony Before the Committee on Oversight and Reform
Judge Orders Man to Stop Using AllCaps in Email to Children
Control Your Car Over the Internet with the Internet Controlled Car!
Facetime with Your Plants! (And Water Them from Anywhere)
Share the knowledge

Number of people who have enjoyed this article: 908