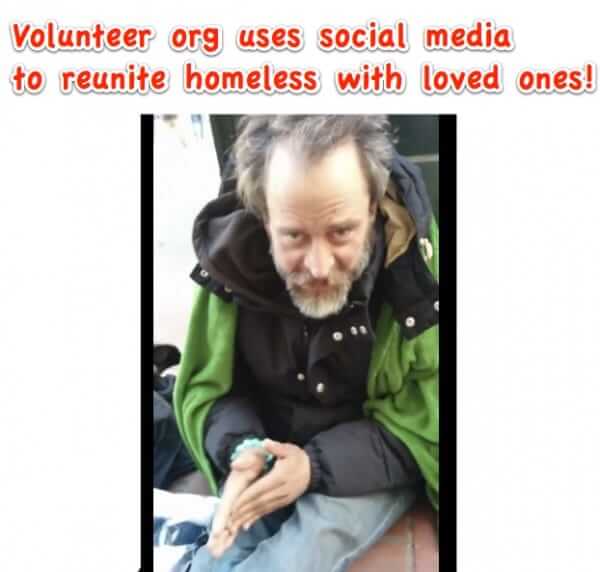 Using social media and the Internet to reunite homeless people with their family and other loved ones? Brilliant! That’s what Miracle Messages is doing, and their stated goal is to reunite at least 1% of the world’s homeless population with loved ones.

It all started when Miracle Messages founder, Kevin Adler, visited the grave site of his uncle, Mark. You see, Kevin’s Uncle Mark had mental health issues, and had himself often experienced periods of homelessness. As Kevin explained in an interview with Upworthy, that visit to his uncle’s grave, which he hadn’t even realized until then existed, got him thinking about all of the homeless people around the world who are disconnected from their families, while he and his friends connect so easily through social media.

And thus, the kernel of an idea was born… an idea that came to fruition last year, in the form of Miracle Messages.

Actually the seed of Miracle Messages was planted during the Christmas season of 2014. That’s when Kevin started asking homeless people around his hometown of San Francisco if they’d like to leave a holiday message for a loved one. Kevin’s idea was that he could post the message on Facebook, and help them find and get in touch with their families via Facebook.

And that’s when Kevin met Jeffrey.

As Kevin explains in that Upworthy interview, “I started talking to him. He was a little bit out of it, but once I asked him about his family, he got incredibly lucid. He looked me right in the eye and said, ‘I haven’t seen my family in a long time.'” 22 years, to be exact.

So Jeffrey let Kevin record a message from Jeffrey to his family.

Here is that message:

Kevin took that video message, got on Facebook, and found a Facebook group for Jeffrey’s hometown of Montoursville, Pennsylvania. Kevin started reaching out to people in that group, and within 20 minutes Jeffrey’s sister had been tagged to watch the video.

And within three weeks, Jeffrey’s hometown had raised the money to bring Jeffrey home.

(You can read Jeffrey’s full [Page no longer available – we have linked to the archive.org version instead].)

So how exactly does it work?

It’s really pretty simple – the volunteer records a message from the homeless person to their family, and then the volunteer uploads the message to YouTube (as an unlisted video), and sends the private link to the video to Miracle Messages, who does the rest.

There is a full explanation of the process (including what to do, and at least as importantly, what not to do), at the [Page no longer available – we have linked to the archive.org version instead].

As we said at the outset, we think that this is a brilliant use of social media, in fact among the best that we’ve seen in quite a while.

How to Find Birthdays in the Facebook Mobile App
Facebook Reveals Massive Breach of up to 50 Million User Accounts
A Computer Spying Method You’ve Probably Never Heard Of
Facebook Goes Down
How to Download Private Facebook Messages from One Person
Canadian Clothing Company High on Life's Social Media Stunts at Yellowstone Land Them in Hot Water
New Facebook Anonymous Login Explained
Facebook Tagging of Photos and Facebook Facial Recognition: How it Works and How to Opt Out of Tagg...
Share the knowledge

Number of people who have enjoyed this article: 631