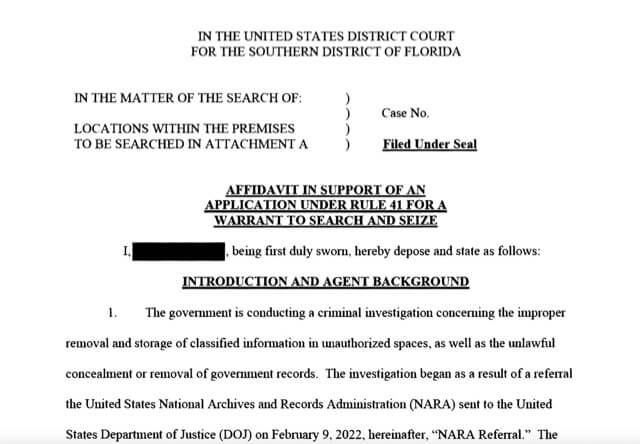 Here is the original PDF of the Department of Justice (DOJ) affidavit that was released today, August 26, 2022, and that was used to secure the search warrant that the FBI used to search Mar-a-Lago for documents and evidence in the investigation of Donald Trump. Below is a full plain text transcription, as well as the original PDF. We are making this available as a service to the public, as we were able to download it before the official documents site PACER crashed under the weight of those looking for the affidavit.

Among other things, the affidavit asserts that “As described above, evidence of the SUBJECT OFFENSES has been stored in multiple locations at the PREMISES.”

It then concludes like this: “Based on the foregoing facts and circumstances, I submit that probable cause exists to believe that evidence, contraband, fruits of crime, or otherr items illegally possessed in violation 18 U.S.C. §§ 793(e), 2071, or 1519 will be found at the PREMISES. Further, I submit that this affidavit supports probable cause for a warrant to search the PREMISES described in Attachment A and seize the items described in Attachment B.”

Other relevant bits include “Based upon this investigation, I believe that the STORAGE ROOM, FPOTUS’s residential suite, Pine Hall, the “45 Office,” and other spaces within the PREMISES are not currently authorized locations for the storage of classified information or NDI. Similarly, based upon this investigation, I do not believe that any spaces within the PRE1,1ISES have been authorized for the storage of classified information at least since the end of FPOTUS ‘s Presidential Administration on January 20, 2021.”

“The PREMISES is currently closed to club members for the summer; however, as specified in Attachment A, if at the time of the search, there are areas of the PREMISES being occupied, rented, or used by third parties, and not otherwise used or available to be used by FPOTUS and his staff, the search would not include such areas.”

Note that this is a raw transcription, and does not include the wide swaths of redaction. You can see the original PDF downloaded from PACER below the transcript.

Number of people who have enjoyed this article: 68