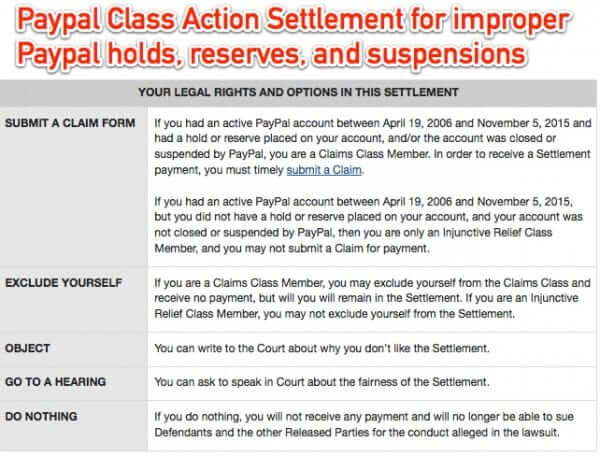 If you had or have a Paypal account that was active between 2006 and 2015 (and who hasn’t?) you may be entitled to money from Paypal under the settlement of a class action lawsuit against Paypal. The lawsuit against Paypal, Moises Zepeda v. PayPal Inc. (case number 4:10-cv-02500-SBA, the full Zepeda v. Paypal complaint is below), was filed back in 2010, and is finally settled.

In a mass email that went out today from Paypal, Paypal explains that “A settlement has been reached in a class action in which the plaintiffs allege, among other things, that PayPal improperly handled disputed transactions on PayPal accounts and improperly placed holds and reserves on accounts or closed or suspended accounts.”

Paypal, of course, disputes this.

However, dispute it or not, there has been a settlement reached – in fact a $3.2 million dollar settlement with the Zepeda class for basic claims, and Paypal has earmarked another $800,000 for alternate claims (more on that below) for a total of $4million.


This week’s notice from Paypal goes on to explain:

You are a member of the Settlement Class if you had an active PayPal account between April 19, 2006 and November 5, 2015. Certain Settlement Class Members who had a hold or reserve placed on their account and/or who had their account closed or suspended by PayPal are eligible to receive a monetary payment upon submission of a valid claim form.

This action arises from the fact that PayPal closes its users accounts without reason to believe that the users engaged in any activity prohibited by PayPal, uniformly holds fund in the users’ accounts for 180 days without regard to whether the hold is reasonably needed to prevent liability, and fails to refund interest earned while the users are denied access to their accounts.

So who is Moises Zepeda, and why did he sue Paypal on behalf of the represented class, in a class action lawsuit?

Moises Zepeda sold gift cards on eBay. According to the Zepeda v. Paypal complaint (see below for the full complaint), Moises Zepeda (who is the ‘Plaintiff’) opened a Paypal account to process the payments he received on eBay. (Remember that in 2002 eBay acquired Paypal, and owned and controlled them until 2015.)

When opening the account, Plaintiff read and relied on statements made on PayPal’s website that PayPal offers quick and easy access to the payments processed by PayPal. While Plaintiff operated his business on eBay, he received no complaints and had 100% positive feedback from his customers.

PayPal stated that, “For the safety and security of the PayPal network, we often review accounts for potential risks. After reviewing your account, we have decided to close it because of security issues.”

PayPal then offered Plaintiff two “Disbursement options.” The first option was that he could issue refunds to any of his buyers. As Plaintiff had no complaints from any buyer, he owed no refunds.

The second option was: “Option 2. Money in your PayPal account will be held for 180 days. After 180 days, we’ll email you information on how to receive your funds.” Had Plaintiff known that PayPal would automatically hold the funds in his PayPal account for 180 if PayPal decided to close the account, he would not have used PayPal’s services.

This is of course not an unknown situation. Back in 2009 we wrote about how Paypal was witholding funds from eBay sellers (some of the more than 100 comments on that article are very eye-opening).

The bottom line, says the complaint, is that “This action arises from the fact that PayPal closes its users accounts without reason to believe that the users engaged in any activity prohibited by PayPal, uniformly holds fund in the users’ accounts for 180 days without regard to whether the hold is reasonably needed to prevent liability, and fails to refund interest earned while the users are denied access to their accounts.”

With the settling of this lawsuit, any Paypal user who has ever had a hold or reserve put on their account by Paypal, or who has had their account suspended or closed by Paypal, between April 19, 2006 and November 5, 2015, may be eligible for a (almost certainly small) piece of the Paypal settlement pie.

To submit your claim, go to the link below. It’s a fast, relatively easy process; you will need to provide your Paypal address, mailing address, and telephone number.

Then you will be given the option of submitting a ‘basic claim’, or an ‘alternate claim’ (for which Paypal has set aside that $800,000).

Upon submission of your claim, you will be given (and emailed) a claim confirmation code.

Here’s the link to submit your claim:

[Page no longer available – we have linked to the archive.org version instead]

You can read the Zepeda v. Paypal lawsuit complaint here:

Is the FTC Going to Come After Me for Not Including My Mailing Address?
Deleting Email Leads to $1.45billion Judgement Against Company
Paypal Says No More Personal 'Friends and Family' Payments to Business Accounts
New CAN-SPAM Rules Effective This Month Require Single Action Opt-Out, Designated Senders, and More
Roundup: Washington, Massachusetts, New York, Maryland, Rhode Island, and Hawaii All Have GDPR-Like ...
Federal Courts Finally Providing Relief from Patent Trolls
FBI, Feds Want to be Able to Decrypt Your Encrypted Email and Messages
How to Cancel an Automatic or Recurring Payment Being Made from Your Paypal Account
Share the knowledge

11 thoughts on “You May be Owed Money from Paypal in Class Action Settlement for Improper Holds, Reserves, and Suspension of Paypal Accounts”

Number of people who have enjoyed this article: 5,245