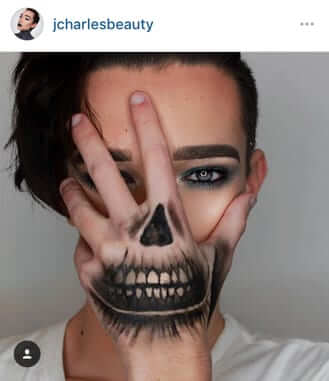 New York teenager James Charles has done something that many people twice his age haven’t been able to achieve: established himself as a moving force to be reckoned with in his professional niche of choice. At just 16 years old, James Charles, who goes by @JCharlesBeauty, has built up an online following of over 200,000. To make it even more impressive, his niche of choice is as a makeup artist (MUA).

The nose-ringed James Charles, who has online presences on Twitter (6,000 followers), YouTube (16,000 followers in under two months’ time), an unknown number of ‘friends’ on SnapChat (because it’s unknowable), and Instagram (a whopping 185,000 followers), describes himself as an openly gay 16-year-old makeup artist with a “huge passion for artsy, avant garde, and abstract looks.”

The thing is, he’s really good at it. (We’re still trying to figure out how he did the lipstick which stayed on throughout his eating pizza and drinking soda!)

And he’s also multi-talented! (His video on Instagram of himself and friend Anthony singing a duet is pure and lovely. Same for one of him singing solo.)


But his first love is makeup, and it clearly shows.

While he doesn’t have many videos up yet on YouTube (again, he only started on YouTube less than two months ago, but we have no doubt that he’ll migrate a good portion of his Instagram followers over to YouTube, which is the better video platform), the few how-to videos that he has up there show him to be a skilled beauty blogger. His foundation how-to video has the polish, poise, and production value of someone much more seasoned (remember, this guy is just 16!), and his video on how to create fake freckles is genius, not to mention adorable.

@JCharles on How to Create Fake Freckles

Other than his short bio on YouTube (“Hi! My name is James Charles. I’m a 16 year old makeup artist from New York. I love doing glam looks but I also have a huge passion for artsy, avant garde, abstract looks. Makeup is one of my biggest passions and I hope you choose to join me on my journey!”), not much is known about this talented young man from New York, but we do know this much: this guy is a guy to watch, because he’s going to go far!

What You Need to Know about Twitter's New Terms of Service and Shadow Banning, and Rights to Your Co...
TWIT Spotting: Billboards of Drivers Caught Texting While in Traffic
Snapchat Sued for Curating Sexually Explicit Material
Justine Sacco and the Most Unbelievable Twitter Tweet of 2013
How to Look Good in Video Calling Apps
Hot or Not, the early-Internet Dating Website that Helped Shape Social Media as We Know It Today
What the #TheEmptyChair Hashtag is All About
We Explain Why People are Saying "Tainted Meat" All Over Facebook and Twitter
Share the knowledge

Number of people who have enjoyed this article: 9,220