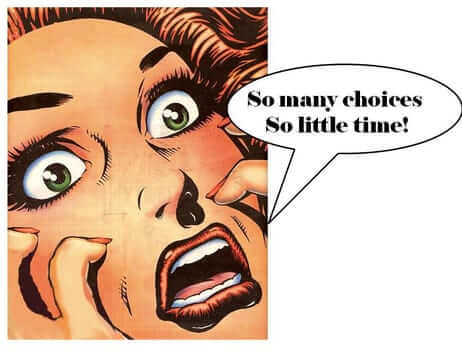 If you or your kids are a product of the last three decades, you may have FoMO, and not even realize that it’s a thing. FOMO stands for “Fear of Missing Out”, and today’s teens and 20- and 30-somethings, unlike any other generations before them, have maximum FoMO.

Dr. Dan Herman, who first coined the term FoMO, and the phrase “fear of missing out”, first noticed the phenomenon as far back as 1996.

Says Dr. Herman, on his website, “I initially became aware of the phenomenon I named FoMO – Fear of Missing Out in 1996, during a focus group study for a client of mine. It struck me as an extremely significant new development in consumer psychology, and in the following years I have been researching The FoMO as a socio-cultural phenomenon, as a motivation, and as a personality factor. The summary below is based on my findings and observations.”

Herman goes on to explain that “It all begins with a growing awareness of the virtually endless selection of attractive options for the consumer to choose from. Then there’s the consumer’s conceived ability to exhaust as many of the options that she would like to. If her conceived ability to exhaust is low relative to her reference group (now larger than ever due to social media), then she will use her imagination to build up a perception of what she is missing.”

Dr. Herman identifies FoMO as a syndrome in consumers, but it’s clear to us that this is a phenomenon that has spilled over into social opportunities, especially for today’s teens and 20-somethings (and especially, as Herman himself points out, with text messages and social media on teen’s phone, alerting them to all of the opportunities going on RIGHT NOW).

This is borne out by the more recent research of Dr. Andrew Przybylski.

Who is Most Likely to Have FoMO?

According to Dr. Przybylski’s research, published in the journal Science Direct, certain variables will influence the level of FoMO that one may experience.

Says Przybylski, in the abstract, “Social media utilities have made it easier than ever to know about the range of online or offline social activities one could be engaging. On the upside, these social resources provide a multitude of opportunities for interaction; on the downside, they often broadcast more options than can be pursued, given practical restrictions and limited time.”

According to Przybylski and his research, the following is known about FoMO, including what factors may influence the level of FoMO that one may experience:

– FoMO is a driving force behind social media use.

– FoMO levels are highest in young people and young men in particular.

– FoMO levels are influenced by social circumstances; Low levels of need satisfaction and life satisfaction are linked to high FoMO.

– FoMO is associated with having ambivalent emotions about social media.

– FoMO is high in those who engage in distracted driving.

– FoMO is high in students who use social media during classes.

How to Tell if You or Your Kids Have FoMO

So how can you tell if you or your kids suffer from FOMO? According to an article on FOMO in Forbes, you may have FOMO if:

(We have modified this list to include teens and 20-somethings, who may be at school rather than working at jobs.)

What to Do if You Have FoMO

So, what should you do if you are driven by fear of missing out, or you realize that your child has FoMO?

As so eloquently put in the Forbes article, “When you know what’s going on, you can name it and claim it. Then decide if that’s really how you want to spend your precious time.”

Reposting Images on Social Media? How it Can Get You in Trouble
Do You have a Finstagram (Fake Instagram) Account?
Studies Show Nobody Reads Terms of Service
Trolls Just Wanna Have Fun: Study Finds Internet Trolls are Narcissistic, Sadistic Psychopaths
What is a GPO? We Explain
Full Searchable Text of Transcript of Call Between President Trump and Ukrainian President Zelensky
Advertising Email Based on Prior Business Relationship is Spam, Users Say
What is a MOOC? What does MOOC Stand for?
Share the knowledge

Number of people who have enjoyed this article: 1,816