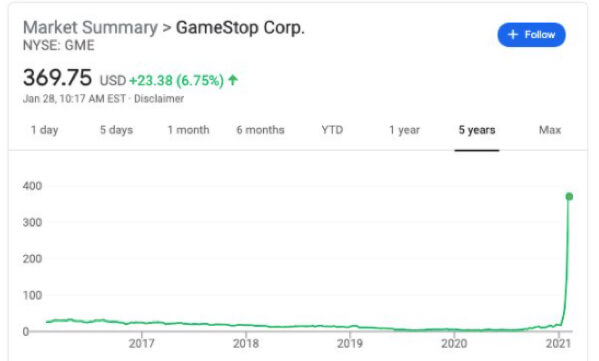 It’s time for a plain English explanation and example of what is shorting a stock. GameStop (not “GameSpot”), Reddit, and short selling stock have been in the news a whole lot this week. Here’s what is going on. Update: 3 class action lawsuits have been filed against Robinhood, so far. (Link below)

What is Short Selling, a/k/a “Shorting” a Stock? A plain English Example

Short selling is when an entity borrows shares of stock, sells them while betting that the price will drop below what they sell them for, then they buy them back at the lower price, give them back to the lender, and pocket the difference.

Example of short selling: X borrows 100 million shares of stock from Y that X believes is going to go down in price. X sells those 100 million shares for $3 a share, betting (and that’s the operative word) that the price per share will go down to $1 a share. X now has $300million from the sale of those shares, and no longer has the shares that they borrowed (because they sold them). When that stock hits $1 a share, X buys the shares back for $100million, and returns the stock to Y (from whom X borrowed the stock), pocketing the $200million difference.

In what is going on this week, hedge fund Melvin Capital had shorted GameStop (GME) on the bet that GameStop stock would go down, but instead GME is going dramatically up – FAR higher than what Melvin Capital had sold it for after borrowing it, so in order to be able to return the stock (or its current dollar value equivalent) to whomever they borrowed it from, Melvin Capital has to take a massive loss.

But from whom are they borrowing these stocks?

Generally shorted stocks are borrowed from brokerage houses, often from the stock pool that includes the stocks in your account. Really, it is very much like how banks use your money, until you pull it out.

Reddit is an Internet chat bulletin board system, with many different sections (subreddits) about many different topics. One of the sections is for amateur investors (i.e. they are not professional traders or brokers), and in a huge discussion, many of the folks in the Reddit section banded together and decided that they would all buy GameStop, which up until this week had been lackluster for years.

It was this action by, at first the Redditers, and then by many others, that drove GameStop’s stock up, far higher than Melvin Capital had ever imagined it could go, leading to Melvin Capital taking it in the shorts (pun intended).

Yesterday (Wednesday, January 27th, 2021) GameStop stock topped $400 a share (up until early Wednesday it had been consistently below $100, and before January 1st it had been under $20 (no, there are no 0s missing there). As a result, Melvin Capital was seriously under water.

In the meantime, when this all started coming to a head, as the Wall Street Journal explains, “Citadel LLC and Point72 Asset Management are investing $2.75 billion in hedge fund Melvin Capital Management, an emergency influx of cash that is expected to stabilize what has been one of the top performing funds on Wall Street. Melvin has been hard-hit by a series of short bets, starting the year with $12.5 billion in assets and losing almost 30% through Friday, people familiar with the firm said. Among other short positions, Melvin bet against the surging stock of videogame retailer GameStop Corp.”

Today, January 28th, as soon as trading opened, several brokerage houses stopped allowing people to buy GameStop, and only allowed them to sell it! This is a nearly unprecedented move, and caused the stock to precipitously tank, going rapidly from above $350 to, at one point, $120.

The plot thickened as folks started realizing that Robinhood (among the first to start shutting their users out from buying GME, and only allowing them to sell it) and Citadel are in bed together, as “Robinhood Financial receives payment from Citadel Execution Services for directing equity order flow to this venue.” (Source: Robinhood Financial LLCSEC Rule 606 Report Disclosure Fourth Quarter 2019

In other words, Robinhood was one of the primary brokerages through which the Redditers and others were buying up GameStop stock. Robinhood makes money by selling their equity orders to Citadel. Citadel now has a huge stake in Melvin Capital, having bailed out Melvin Capital to the tune of billions of dollars, to keep them solvent in the face of the increase in price of GameStop stock, which Melvin Capital had bet on going down, not up.

Now think about this: Funds borrow stocks from brokerages, using stock that is in their investors’ accounts – in other words using stock that is in your investment account (much like a bank uses the money in your account until you withdraw it) – the funds that are shorting stock are using your stock to screw you. In this particular case, you buy stock in GameStop, then the brokerages prohibit buying more which causes the value of that stock – your stock, in your account – to plummet.

We’re not sure how this will all play out, but at very least it will serve to alert and educate the average person to the massive (we do mean massive) gambling that is going on down on Wall Street every day. As one lawmaker put it, “Gotta admit it’s really something to see Wall Streeters with a long history of treating our economy as a casino complain about a message board of posters also treating the market as a casino.”

Are the Amazon Echo, Google Home, and Siri Making People Less Polite?
Comparing Google Searches in Areas Where Life is Easy to Where Life is Hard
Here's What is Considered an Older Adult in Terms of the Coronavirus, Flu, and Other Illnesses
Pizza Rat an Internet Sensation
List of Coronavirus Information Hotlines by State (Phone and Email Hotlines for COVID-19 Information...
What the Melania Trump Website Looked Like and Said Before it was Taken Down
Yes, Facebook's Data Mining is a Problem
Do You Have FOMO?
Share the knowledge

Number of people who have enjoyed this article: 902