Google and Apple have both removed the Parler app from their app stores, and now Parler has sued Amazon for terminating their web hosting of Parler (more on that below). However, before Parler was shut down, one security researcher managed to grab and archive at least 70 terabytes of Parler user data, including user posts, videos, and images (some with location data).

In Tweets yesterday, the security hacker, who goes by the username “donk_enby” and the nickname “crash override”, announced that “I am now crawling URLs of all videos uploaded to Parler. Sequentially from latest to oldest. VIDXXX.txt files coming up, 50k chunks, there will be 1.1M URLs total,” adding “This may include things from deleted/private posts,” and that “These are the original, unprocessed, raw files as uploaded to Parler with all associated metadata.”


She also posted a sample of the sort of posts she was downloading, saying that it was “a sample of what’s in there”. The Parler post, which includes identifying information of the poster, says “Shut them down Mr. President, try them, hang or shoot them publicly, the traitors, thieves, and perverts who have taken oru great, blessed, country hostage.”

Meanwhile, Amazon, whose AWS services had been hosting the Parler website, shut Parler down for violating Amazon’s terms of service.

Parler CEO John Matze issued a statement in a post on Parler on Saturday, before the shutdown.

“Sunday (tomorrow) at midnight Amazon will be shutting off all of our servers in an attempt to completely remove free speech off the internet. There is the possibility Parler will be unavailable on the internet for up to a week as we rebuild from scratch. We prepared for events like this by never relying on amazons proprietary infrastructure and building bare metal products.

We will try our best to move to a new provider right now as we have many competing for our business, however Amazon, Google and Apple purposefully did this as a coordinated effort knowing our options would be limited and knowing this would inflict the most damage right at President Trump was banned from the tech companies.

This was a coordinated attack by the tech giants to kill competition in the market place. We were too successful too fast. You can expet the war on competition and free speech to continue, but don’t count us out.”

Amazon did indeed pull the plug on Parler on Sunday (yesterday).

You can read the full text of the legal complaint by Parler against Amazon here.

Meanwhile, while major Parler investor Dan Bongino, also in a post on Parler before it went dark, said that Parler was “not done with Apple and Google,” and to “Stay tuned to hear what’s coming,” (to which another Parler user opined that “It would be a pity if someone with explosives training were to pay a visit to some AWS Data Centers – the location of which are public knowledge,”) Matze acknowledged that Parler’s own lawyers had jumped ship.

While the lawsuit may be interesting to follow, the real legal actions to follow will be the efforts of the various law enforcement agencies to access the treasure trove of Parler threats in the 70+ terabyte archives. As of the writing of this article there have been at least 120 arrests in connection with the events of Wednesday, January 6th. If any law enforcement agency gets their hands on the Parler records, which would certainly aid them in identifying key figures in Wednesday’s riot, you can expect many, many more.

Drive-Thru Lets Fast Food Customers Pay with EZ-Pass
Paypal to Block Apple Safari Browser, Other Browsers
Memes Shared on Twitter Infected with Malicious Code
How to Use the Internet for Senior Citizens: a Collection of the Internet Patrol's Best Tips
Massive Breach Exposes Hunting and Fishing License Data in Idaho, Oregon, Washington and Kentucky
Vehicle to Vehicle "V2V" Communication Coming to a Car Near You
Enormous Yahoo Data Breach with Usernames, Passwords, Dates of Birth
What is Remarketing and Why Should You Care? Remarketing Explained
64shares 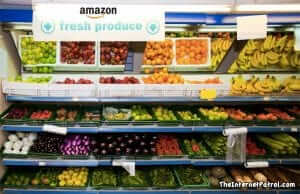 Can’t Find How to Turn on Text Message Notifications for Amazon Fresh and Whole Foods Delivery? Here’s Why

With Google Photos Ending Unlimited Storage, Here Is How to Check How Much Space You Have Left
64shares