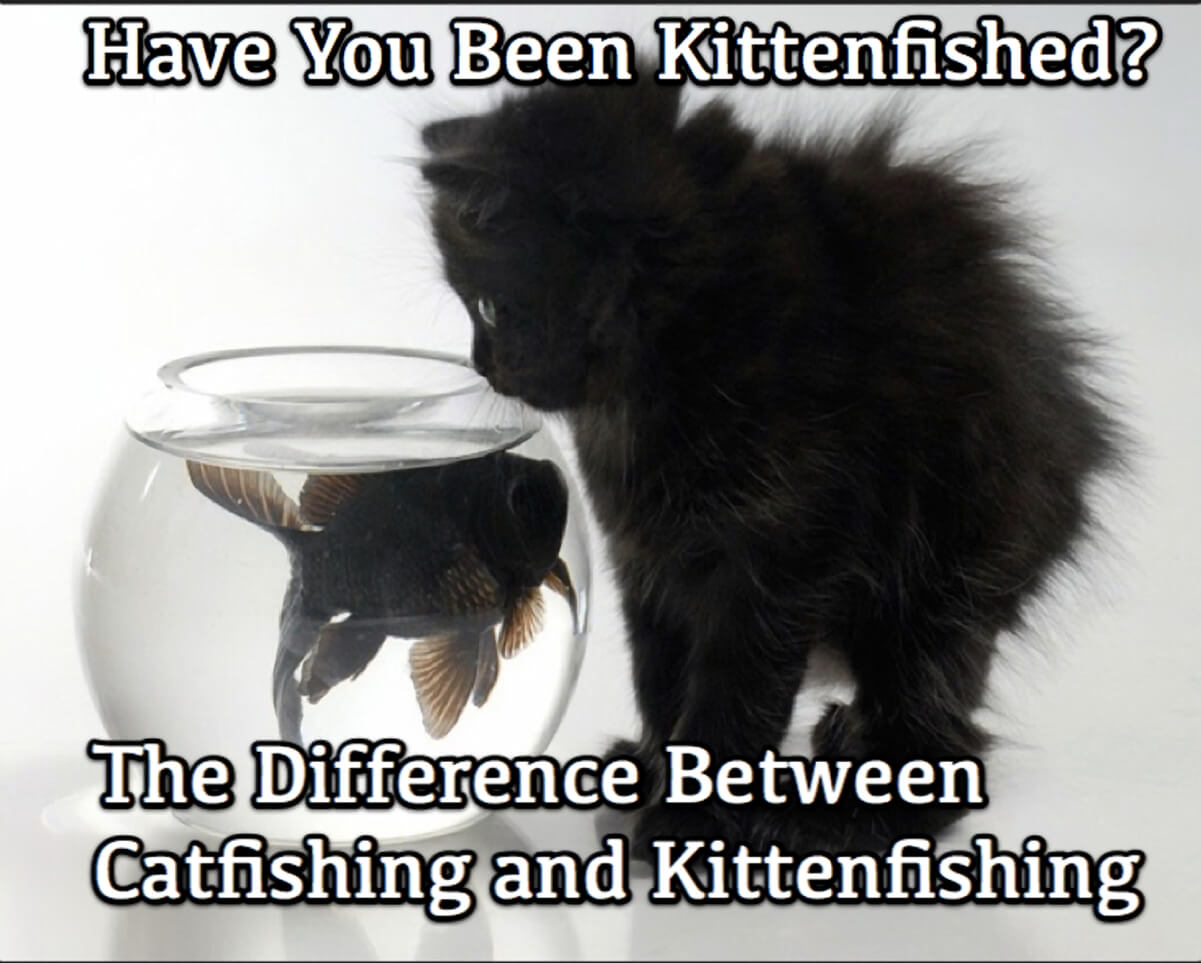 Even if you are not involved with online dating, you probably know what it means to catfish or to be catfished – but have you ever been kittenfished? Kittenfishing, or to kittenfish, is when, through your online profile, you make yourself seem much more attractive, slimmer, younger, smarter, or otherwise misrepresent who you are to make yourself seem somehow ‘better’ in the eyes of your beholders.

Catfishing is when you assume a completely different identity – maybe even of the opposite sex – in your dating profile. Kittenfishing, on the other hand, is when you keep your identity – but alter material facts about yourself by both visual and textual representation, to enhance your profile. With kittenfishing you are the bait, but it’s not really the real you, as you are now. It’s not even your best version of you. It’s your enhanced version of you, airbrushed with little white lies (and maybe even a few bigger ones).

The dating site and app Hinge originally coined the term kittenfishing in 2017, on their blog site HingeIRL.com. In that post, titled Kittenfishing: It’s “Catfishing Lite” And You’ve Definitely Experienced It, Hinge defined their newly minted term as “the phenomenon of well-intentioned dating app users presenting themselves in an unrealistically positive light. A kittenfisher’s profile is often comprised of photos that are outdated, heavily-filtered, or strategically angled, text that has been ghost-written by a particularly witty friend, and height that has been rounded by more than two inches.”

To which we would add “weight that has been rounded down by 5-15%”.

According to Hinge, once they came up with the concept they surveyed their members to see if their members were aware of having been kittenfished, or perhaps had even done a little kittenfishing themselves.

“Curious as to how widespread the ‘kittenfishing epidemic’ is,” says Hinge, “Hinge took a June 2017 survey of its Members to find out exactly what type of deception runs rampant in the dating app community at large — particularly on swiping apps, which, unlike Hinge, do not provide last names once the connection is made, therefore making “online research” to confirm appearance, job, or education level more difficult.”

[Note: The ‘swiping apps’ to which Hinge refers are those like Tinder and Bumble. Speaking of which, because they make it impossible to figure out, here’s how to cancel a Bumble Boost Premium account.]

It’s worth noting that Hinge did not disclose in the article how many members they had surveyed in total, nor whether it was an anonymous survey. If the survey was not anonymous (for example if the survey was presented to members when they were logged in) then it’s not surprising that only 1-2% admitted kittenfishing.

Some outlets are far more generous than are we in their interpretation of the low percentage of self-reported kittenfishers. For example, in an article on kittenfishing in the New York Post, they suggest that the ultra-low 2% and 1% figures are because “most people don’t realize the extent of their own lies.” We still think it’s likely that Hinge’s members either were not reporting anonymously, or thought it was possible that they weren’t anonymous. We mean, really, you know if you’re fudging things, right?

Aspects of someone that may be blurred by a light application of kittenfishing include not just height, weight or age (although those seem to be the most common) but also academic background and cultural background (i.e. what movies do they like, what books have they read, do they like the opera or the symphony, etc..). After all, who is it harming if you say that you have read War & Peace (in the original Russian), or cry every time you see Madama Butterfly, when the closest you’ve actually come to War & Peace is playing the card game War, and the last thing you saw that brought tears to your eyes was Avengers: Endgame?

So, have you been kittenfished? Or, even been the kittenfisher? Let us know your stories!

How to Unsubscribe from Match.com When You Signed Up through the Match App via the App Store
The Truth Behind New York's Ban on Tiger Selfies
OKCupid Asks Users to Ditch Firefox Over Anti-Gay Rights CEO Brendan Eich
New Online (and Offline) Dating Term Trend: Houseplanting Dating
Spritzr: Not Your Mother's Dating App - in Fact it's Also a Matchmaking App
Online Dating Site OKCupid Down - April 2017
Verona Dating App Connects Israelis and Palestinians to Advance World Peace
New Online Dating Scam - I'm Contacting You for a Friend
Share the knowledge

Number of people who have enjoyed this article: 819