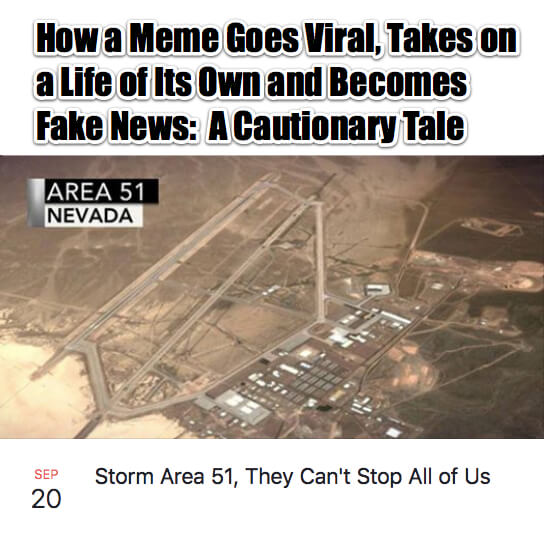 The Facebook event “Storm Area 51, They Can’t Stop All of Us” was put up as a joke, says Matty Roberts, who was one of the people behind creating the Storm Area 51 Facebook event page-turned-meme. This is the story of how a seemingly innocent joke can turn viral and become fake news without even intending to be anything other than, well, light-hearted satire. In other words, it is a cautionary tale for us all.

It’s insane and I just created a joke while I was playing video games and it has taken off to this wild monster.

With over 2 million people saying they are going, and another 1.2 million expressing interest, Matty Roberts knew that the Storm Area 51, They Can’t Stop All of Us Facebook page, which had been created just a few weeks ago on June 27th, had taken an interesting turn. “I never foresaw this happening to me at all, I have never done anything that has reached this scale of attention and it’s completely surreal and really cool,” Roberts told Bakersfield, California ABC affiliate KERO TV.

Then the FBI showed up at his door.

“So, the FBI showed up at 10 a.m. and contacted my mom and she calls me like ‘answer your phone the FBI is here’. I was kind of scared at this point, but they were super cool and wanted to make sure that I wasn’t an actual terrorist making pipe bombs in the living room,” says Roberts.

Facebook “accidentally” (they say) removed the event for a few days, and then, with little notice or fanfare, reactivated it.

Now, Matty Roberts wants to make the event – of which he says “It’s insane and I just created a joke while I was playing video games and it has taken off to this wild monster” – into something akin to an outdoor festival.

Says Arby’s Chief Marketing Officer, Jim Taylor, “We can’t confirm if there are aliens at Area 51. But, if they do show up, they deserve the best meats on Earth. If not, Arby’s will still be there serving the planet’s best meats to everyone else attending this historic event.”

Oreos claims that their Moon Marshmallow Oreos are “The only peace offering accepted by aliens at Area 51,” and Bud Light is offering a free beer to any alien who makes it out of Area 51.

Oreos: The only peace offering accepted by aliens at Area 51 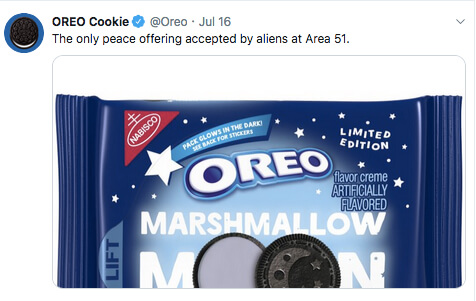 Free Bud Light to any alien that makes it out. 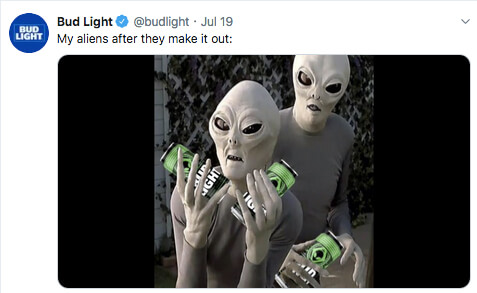 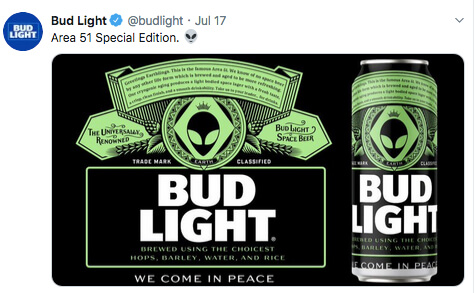 Lego posted on their Facebook page “Don’t Storm Area 51. We’ve checked, it’s all good,” along with a (we must say very cute) picture that is supposed to be a screen capture of surveillance video made inside the Area 51 of the Lego universe. 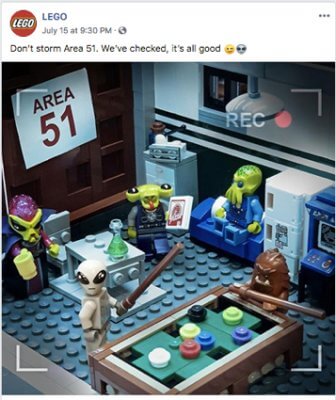 And, not to be outdone, Kool-aid created a tweet in its iconic ascii art. 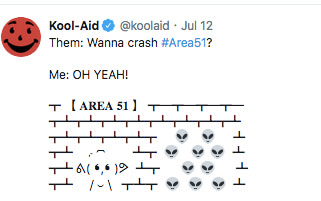 But let’s not lose sight of the point here: Matty Roberts created a joke Facebook event which went viral, became a meme, and manifested and turned into a real event, and all because it became, essentially, fake news.

As we said at the outset, this is a cautionary tale for the masses. Because this is a friendly, innocent joke that became a thing because – and only because – of the power of the Internet to convince people that something is real, even when it was never intended to be taken that way.

Now think about all of the change agents out there who are creating things with the intention of convincing you it’s real, when it’s not.

Open Source Seeds Take Cue from Open Source Software Playbook
Do You Have FOMO?
List of Coronavirus Information Hotlines by State (Phone and Email Hotlines for COVID-19 Information...
What is a GPO? We Explain
Reset the Net Goes Viral with a 'Reset the Net Privacy Pack'
You Still Have to File Your Taxes by April 15 But You Have 90 Extra Days to Pay Them
New Website for Those at High Risk for Covid Lists "Covid Safe" Medical and Service Providers
Research Says that Instagram Leads Teen Girls to Feel Bad about Their Bodies and that Facebook Knows...
Share the knowledge

Number of people who have enjoyed this article: 1,371