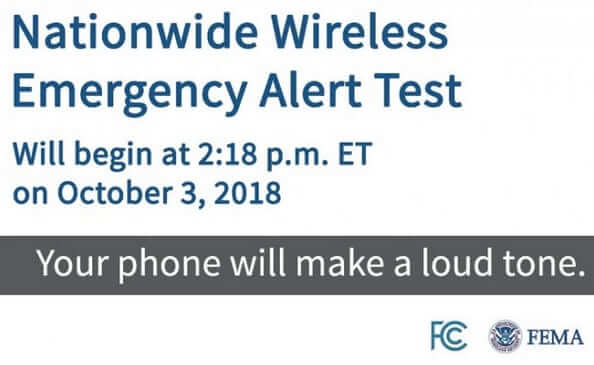 In the immortal words of Douglas Adams’ Hitchhiker’s Guide to the Universe, don’t panic… that is don’t panic today when you receive a nationwide presidential emergency alert, at 2:18pm Eastern Time via FEMA on your cell phone, smartphone, or other mobile device. It is a test. It is only a test. If it were a real emergency you would receive vital information via this newly launched alert system.

The test, which, according to ABC, FEMA estimates will reach approximately 75% of all wireless-enabled devices, is the first for a nationwide emergency alert. (We guess that those poor folks in the 25% are on their own; although we also guess that most people know enough to shelter in their concrete bunker when they see the mushroom cloud in the distance.)

In addition to the visual message, you may be startled by a loud, obnoxious tone coming from your device.


According to the FEMA site, here’s what you need to know:

WHY: The purpose of the test is to ensure that EAS and WEA are both effective means of warning the public about emergencies, particularly those on the national level. Periodic testing of public alert and warning systems helps to assess the operational readiness of alerting infrastructure and to identify any needed technological and administrative improvements.
HOW: The EAS and WEA test messages will be sent using FEMA’s Integrated Public Alert and Warning System (IPAWS), a centralized Internet-based system administered by FEMA that enables authorities to send authenticated emergency messages to the public through multiple communications networks.
WHO: FEMA will administer the test, in cooperation with the FCC and the National Weather Service, and with the participation of the communications industry.
WHEN: October 3, 2018, beginning at 2:18 p.m. EDT on cell phones and 2:20 p.m. EDT on TV and radio. (This is the test back-up date; the test was previously postponed due to response efforts to Hurricane Florence.)

Here’s how it works, also according to FEMA: “Many members of the public will receive the WEA test message on their cell phones. Specifically, beginning at 2:18 p.m. EDT, cell towers will broadcast the WEA test for approximately 30 minutes. During this time, WEA-compatible wireless phones that are switched on, within range of an active cell tower, and whose wireless provider participates in WEA, should be capable of receiving the test message. Wireless phones should receive the message only once.”

When they say “that are switched on, within range of an active cell tower, and whose wireless provider participates in WEA”, they neglect to mention one other requirement: That you have your setting for government alerts switched on.

As we explain in How to Turn Off and Disable Operation Amber Alerts on Your iPhone and Android Phone (which also uses the WEA alert system), you can either turn off or turn on emergency notifications from the government by going to the Notifications area of your settings on your mobile device, scrolling to the bottom, and finding the ‘Government Alerts’ setting, which is a simple on/off switch.

Go to your Notifications Settings 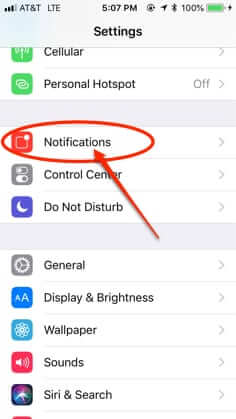 Turn on or off Government Alerts 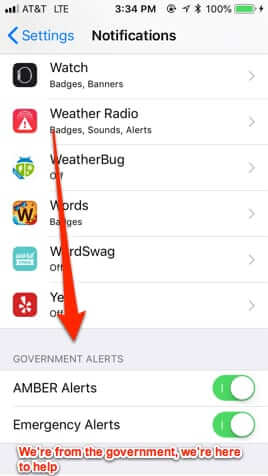 Let us know if and when you got today’s test!

What is a GPO? We Explain
Paris Hilton's Sidekick Hacked - Data Posted to Internet
Cool Photo Editing Apps That Makes Your Phone Pictures Standout
The Internet, Is It Good or Bad For Democracy?
Do You Have Protection Fatigue Brought on by Trying to Keep Yourself Safe from the Virus?
Save Money with Our List of the Best Free Streaming Services
5 Great Apps to Get You Organized
The Word "Selfie" Official in the Oxford Dictionary
Share the knowledge

Number of people who have enjoyed this article: 529