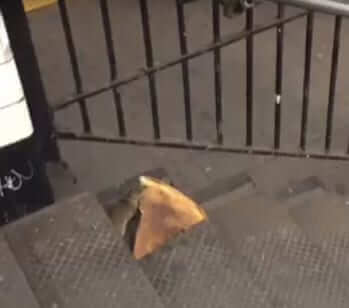 First we had Basher the photobombing squirrel, and Sneezy the Penn State squirrel, but the newest rodent darling of the Internet is a rat. The video of the rat running down the subway stairs with an entire slice of pizza has gone beyond viral, catapulting both Pizza Rat, and his videographer, comedian Matt Little, into the pantheon of Internet rodent fame.

We should make clear that Matt Little’s little friend, Pizza Rat, is not in any way affiliated with an app of the same name. That other Pizza Rat is an app (and related website) where one can get the skinny – and report – on the cleaniness of pizza joints around the country.

No, the Pizza Rat of which we speak – Rattus Pizzacus – made his debut on the Internet last month, on September 21, to be exact. That is the day that Matt Little saw a slice of pizza scampering down the stairs towards the subway, filmed him (or her) and posted it to YouTube. As Little himself explains, “I shot a video I called #pizzarat, and it went viral. It’s a weird experience.” 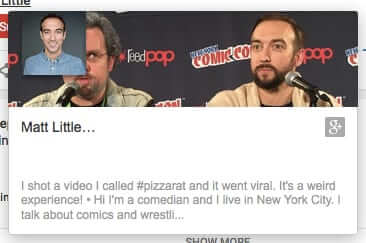 But wait, there’s more! All sorts of Pizza Rat merchandise is already happening, much of it, we assume, unofficial. 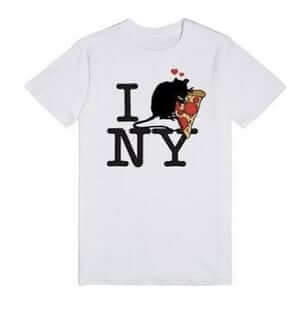 (See below for how you can win an official Pizza Rat shirt.)

And Tiny Hamster – another rodent celebrity, although apparently not as famous as Pizza Rat – at least we’d never heard of him, is dressing up as Pizza Rat for Halloween! 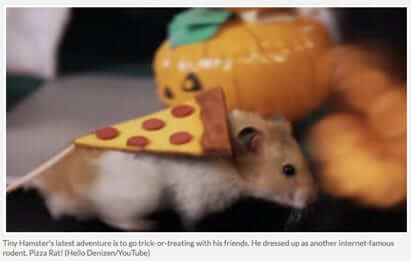 So what explains this sudden love affair with… a rat?

Some have suggested that it may be the heroic battle – Pizza Rat’s David to the pizza’s Goliath.

Or maybe it’s Pizza Rat’s dogged… er… ratted?.. determination to get this enormous prize down the stairs.

Says CNet, one of the lessons of Pizza Rat is that “Your dreams are worth fighting for, even if your dream is just a stale piece of pizza.”

Personally, we think that it’s the impressive way that Pizza Rat manipulates and flips the pizza as he tugs it from stair to stair.

Or maybe it’s just that he’s so darned cute.

Whatever it is, he definitely became an Internet phenom. As of the time of this writing there are over 27,000 Tweets on Twitter with the hashtag #pizzarat.

And not just an Internet phenom!

Last week Tina Fey’s Netflix series, Unbreakable Kimmy Schmidt created a Pizza Rat Blvd. sign and installed it, temporarily, at the corner of Franklin and India Avenues in the Greenpoint area of New York City. Presumably it will show up in a future episode.

We’re not sure where this Pizza Rat craze will lead, but if you haven’t seen Pizza Rat for yourself yet, here he is, in all his pizza-toting glory. And when you are done watching the Pizza Rat video, you can register to win a free Pizza Rat t-shirt by subscribing to Matt Little’s YouTube channel.

Your Deepest Secrets are Not Safe with Your ISP
Research Says that Instagram Leads Teen Girls to Feel Bad about Their Bodies and that Facebook Knows...
What is a MOOC? What does MOOC Stand for?
Just in Time for Black Friday and Cyber Monday Our Readers Share Their Top Holiday Gift Ideas
Hofeller Files including Redistricting and Census Documents Posted Online by Daughter Stephanie
Trolls Just Wanna Have Fun: Study Finds Internet Trolls are Narcissistic, Sadistic Psychopaths
What Does Deplatforming Mean? And is Deplatforming Legal? Here's the Info
'Firefox Hello' Video Chat Service Takes on Facetime, Skype, and Viber
Share the knowledge

One thought on “Pizza Rat an Internet Sensation”

Number of people who have enjoyed this article: 1,479