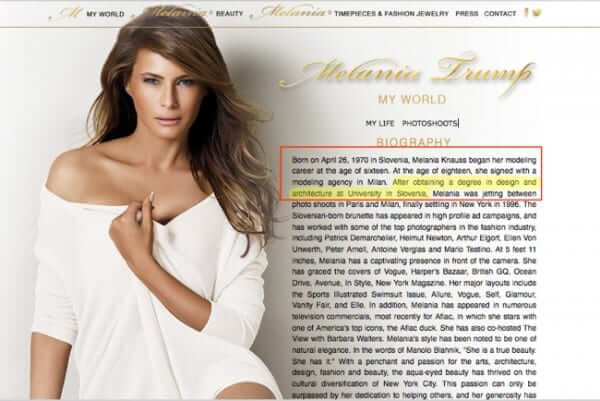 Melania Trump’s website was taken down yesterday, over questions about her claim to have obtained a college degree in design and architecture from the University of Slovenia. MelaniaTrump.com now forwards to the primary Donald Trump website. But because everything on the Internet persists, and because Mrs. Trump is a public figure, we can show you exactly what that site looked like, and what it said. Here’s what Mrs. Trump’s website looked like, and what it said, before it was taken down.

Multiple news sources, including the New York Times, have debunked the claim that Melania had taken a degree, which was a claim made on Mrs. Trump’s site for many years. “For months now, reporters have noted that Ms. Trump, who grew up in the small Slovenian town of Sevnica, did not obtain an undergraduate degree in architecture from the University of Ljubljana, as her professional website claimed she did. Instead, she left after her first year to pursue a modeling career in Milan,” explains the Times.

What Melania Trump’s Website Said and How it Looked

Born on April 26, 1970 in Slovenia, Melania Knauss began her modeling career at the age of sixteen. At the age of eighteen, she signed with a modeling agency in Milan. After obtaining a degree in design and architecture at University in Slovenia, Melania was jetting between photo shoots in Paris and Milan, finally settling in New York in 1996. The Slovenian-born brunette has appeared in high profile ad campaigns, and has worked with some of the top photographers in the fashion industry, including Patrick Demarchelier, Helmut Newton, Arthur Elgort, Ellen Von Unwerth, Peter Arnell, Antoine Verglas and Mario Testino. At 5 feet 11 inches, Melania has a captivating presence in front of the camera. She has graced the covers of Vogue, Harper’s Bazaar, British GQ, Ocean Drive, Avenue, In Style, New York Magazine. Her major layouts include the Sports Illustrated Swimsuit Issue, Allure, Vogue, Self, Glamour, Vanity Fair, and Elle. In addition, Melania has appeared in numerous television commercials, most recently for Aflac, in which she stars with one of America’s top icons, the Aflac duck. She has also co-hosted The View with Barbara Walters. Melania’s style has been noted to be one of natural elegance. In the words of Manolo Blahnik, “She is a true beauty. She has it.” With a penchant and passion for the arts, architecture, design, fashion and beauty, the aqua-eyed beauty has thrived on the cultural diversification of New York City. This passion can only be surpassed by her dedication to helping others, and her generosity has been noted. She was Honorary Chairwoman for Martha Graham Dance Company in April 2005, is an active member of the Police Athletic League which honored her with Woman of The Year 2006, has been an Honorary Chairwoman for The Boy’s Club of New York for five consecutive years, and in 2005 The American Red Cross awarded her with Goodwill Ambassador which she has proudly served for four years. In April of 2008, she was asked by Love Our Children USA and NASDAQ to participate in the Fifth Annual National Love Our Children Day and the beginning of National Child Abuse Prevention month by ringing the closing bell at NASDAQ. Melania’s philanthropic interests more and more represent her humanitarian side, and she remains an indefatigable and dedicated New Yorker. Melania married Donald Trump in January 2005. In March of 2006 they had their first child, Barron William Trump. In February 2010, Melania Trump announced the launch of her debut jewelry collection with QVC, “Melania™ Timepieces & Jewelry”. In March 2013, Melania has added to her already extensive resume her Skin Care Collection, “Melania™ Caviar Complexe C6”.

Even as far back as 2006 – ten years ago – Melania’s website claimed that she had taken a degree from the University of Slovenia. 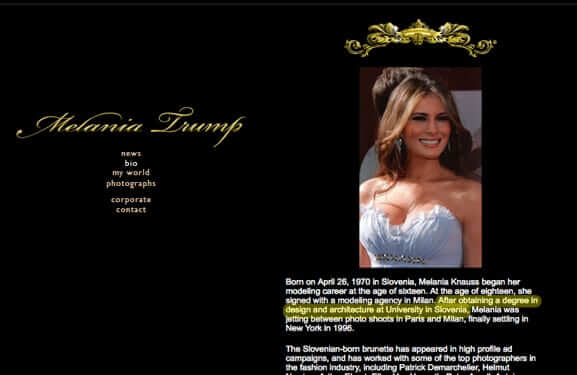 However, MelaniaTrump.com did not always belong to Mrs. Trump. In fact, it appears that it was created by a squatter in hopes of getting rich by selling it to the Trumps after their wedding, when Melania became Melania Trump. 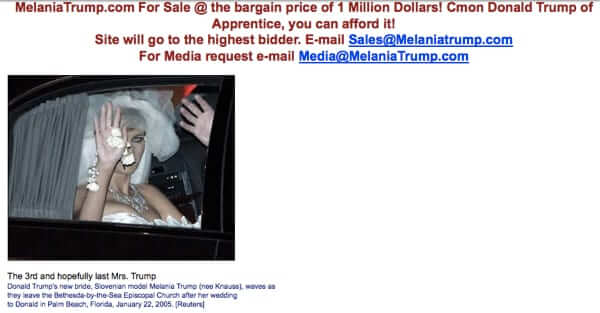 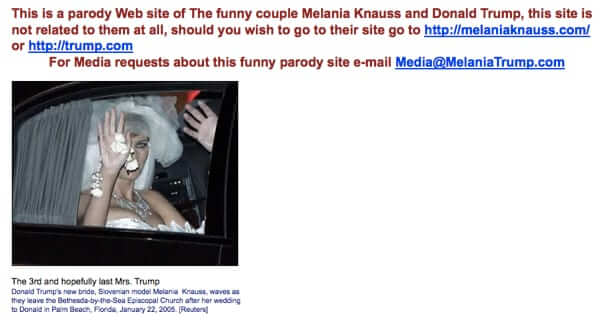 Some time between December 2005, and March 2006, the site was acquired by the Trumps.

Since then, over the years between 2006 and 2016, the site has evolved, with work being done on the site several times, and yet, the inaccuracies about Mrs. Trump’s academic background remained. In 2013, so three years ago, the website underwent an extensive facelift, removing a flash-based welcome page that had been put in place in 2006 when the domain was first acquired by the Trumps.

Through all of these changes, the line “After obtaining a degree in design and architecture at University in Slovenia” remained.

Next Gen 911 (NG911) and Swatting - How the New Next Generation 911 can be Exploited with Devastatin...
New Online (and Offline) Dating Term Trend: Houseplanting Dating
A Message from Anne: My Big Bad Accident and Why You Should Wear Your Seatbelt
You May Have Money Owed to You Right Now That You Didn't Know About! It's Called Unclaimed Property
The Word "Selfie" Official in the Oxford Dictionary
ACLU Mobile Justice App Records Police Actions as They Happen
Can Your Car be Hacked through its Onboard Wireless?
What is Dalgona Coffee (Quarantine Coffee), Why is it Blowing Up Social Media, and How to Make Quara...
Share the knowledge

Number of people who have enjoyed this article: 1,747