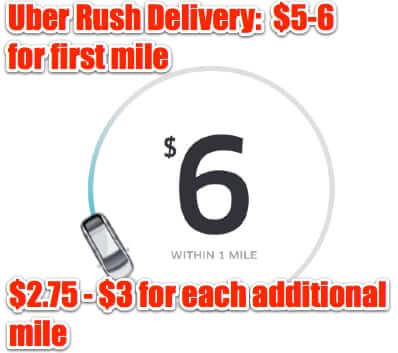 Uber has rolled out its UberRUSH package delivery service in initial locations San Francisco, Chicago, and New York City (Manhattan). UberRUSH is basically for business packages what Uber is for human passengers. While at first blush it may seem like it is competing with services like Amazon Prime Free (Amazon’s same-day delivery service) or even Amazon Prime Now (the Amazon one-hour delivery service), Business Insider is calling UberRUSH the “FedEx killer”. That’s because while individuals can use UberRUSH, it was really created for merchants and other businesses to use to get their product to local customers quickly and efficiently (and of course let’s not overlook the ‘cool’ factor).

Not only is UberRUSH fast, and efficient, but it’s relatively inexpensive. If you have sent a FedEx or UPS rush delivery package lately, then you will know that paying between $5 and $6 for rush delivery of a local package RIGHT NOW is pretty tasty. Of course, that is for delivery within a mile of pickup, but for each additional mile it’s just between $2.75 and $3.00, depending on which UberRUSH city you are in. Again, at the time of this writing, UberRUSH is available in NYC, Chicago, and San Francisco.

In addition, according to InternetRetailer, individuals in New York can also use UberRUSH to deliver things to their friends.

So, let’s say that you are in one of the three locations that UberRUSH services, how do you check it out? Read on.

From there it’s pretty straight-forward. 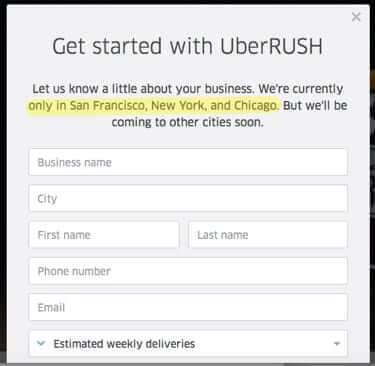 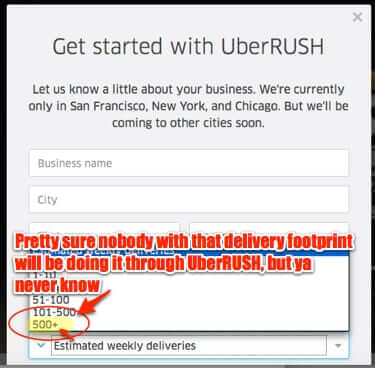 Hopefully UberRUSH drivers will not be leaving a blank delivery door tag like FedEx does!

We do expect Uber’s business model with UberRUSH to be slightly more high flying (pun intended) and infinitely more practical than Amazon’s Drone delivery service, although Business Insider quotes Amazon as saying it expects to start up drone delivery in about a year.

In the meantime, have you tried UberRUSH? If so, let us know how it worked out for you!

Uber Offers Flu Shots and (RED) AIDS Fighting through UberHealth
UberPET for Uber Pets is a Real Thing Not a Parody - Available Now in These Cities!
Share the knowledge