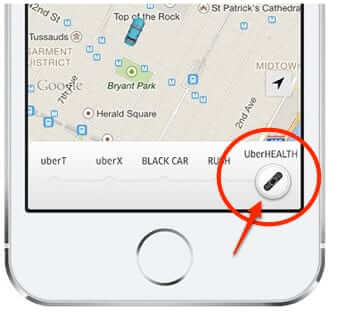 Don’t have time to go out and get a flu shot? Now through Uber’s UberHealth service, you can have on-demand mobile flu shots come to you! During a one-day promotion last week, in select cities throughout the United States, from Atlanta to San Francisco, Uber Health would bring a nurse-administered flu shot right to your door. While this was a one-day offering, we’re sure that they’ll offer it again. (See below for a full list of cities in which Uber offered an Uber flushot.) And in the meantime, Uber has teamed up with AIDS-fighting program (RED) to raise money for the (RED) AIDS program.

So why has Uber forayed into providing health services? Explains Uber, of the flu shot program, “Convenience and delivery method are both key components of many people’s decision of whether or not to get a flu shot.”

And it certainly doesn’t get more convenient than having your flu shot come to you.

Last year Uber rolled out and trialed their UberHealth initiative, offering mobile flu shots in just 4 cities. That trial was so successful that not only did Uber expand to 35 cities in 2015, but they brought on a health policy advisor, in the form of Dr. John Brownstein. Brownstein is with Boston Children’s Hospital, where he is the Chief Innovation Officer, and is also an associate professor at Harvard Medical School.

Whatever you may think of the Uber flu shot program, they are clearly serious about investing in some health-related do-gooding.

Explains Uber, in their announcement of this year’s UberHealth Uber flu shot program, “Flu season is just around the corner and trying to squeeze in your latest immunization may not be on the top of your To Do List. You’re not alone. The flu affects up to 20% of the population each year — but it’s preventable. While vaccination remains the single best option, less than 50% of adults receive a flu shot.”

They go on to explain that “If you request and receive a wellness pack, you’ll also have the option to request a free flu shot from a registered nurse for up to ten people – at the single touch of a button.”

To be clear, the UberHealth wellness pack was $10 per delivery – but for that the nurse would administer up to 10 flu shots at no extra charge.

While we don’t know exactly when Uber will next offer this flu shot service, we’ll be sure to let you know as soon as we do.

In the meantime, Uber is now teaming up with the (RED) initiative to help fight AIDS. Tomorrow, December 1st, Uber riders in 150 cities can add a $5 donation to Red right through the Uber app.

Here’s a list of the cities in which the Uber flu shots were offered – again, stay tuned for an announcement of the next time they will offer the flu shot service:

Digital Driver's License Coming to Some States
Xbox Pizza Hut App Raises Millions in New Business for Pizza Hut
New Bluetooth Internet Toothbrush
UberPET for Uber Pets is a Real Thing Not a Parody - Available Now in These Cities!
The Best Must-Have Apps for 2013
Browsing in Dark Mode: Why You Might Need to Turn Off The Light to Save Your Eyesight
New Device Tracking Apps Help You Find Your Lost Keys, Your Wallet, Even Your Phone Itself
Facebook Offers New Feature: Ditch Your Ex without Unfriending Them
Share the knowledge

Number of people who have enjoyed this article: 936