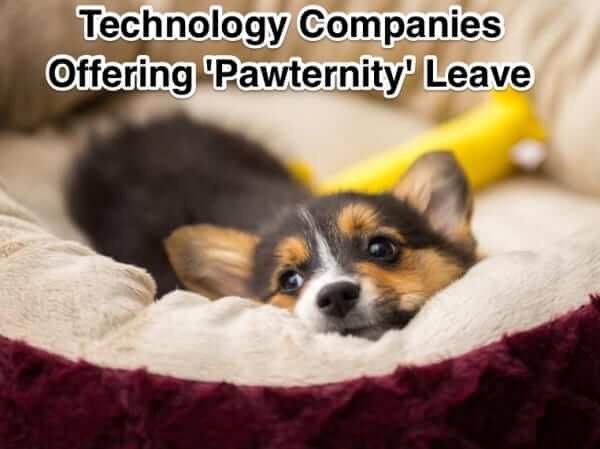 Here’s one sure to make pet lovers everywhere go ‘awwww’: some tech (and other) companies are now providing pawternity leave for employees who have just adopted a new puppy, kitten, or other pet! Also known as peternity leave, the concept is really catching on, and why not?

Companies that are offering pawternity / peternity / pet adoption time off include Mars Petcare and BitSol Solutions, and while it’s unclear whether Silicon Valley-based Kimpton Hotels has a formal pawternity policy, they actively encourage their employees to adopt from animal shelters, and they do have a pet bereavement policy.

[Speaking of pet bereavement, did you know that the parent company of the Internet Patrol has offered a pet bereavement poems and gifts site since 2006?]

Anyways, back to happier times, and what’s happier than the adoption of a new puppy, kitten, bird, iguana, potbellied pig, goat, or other pet? Explains Greg Buchanan, founder of BitSol Solutions, “Pets are like babies nowadays, so why shouldn’t staff have some time off when they arrive?”

In fact, BitSol gives pet-adopting employees a full week off, with pay, so that employees can spend time acclimating their new pet to their new home, and vice versa.

While tech companies in the U.S. have been a bit slower than those in the UK (which is where BitSol is headquartered) to implement pet adoption leave policies, Colorado-based Bomber Industries offers employees time off to care for a sick pet, and, as we already mentioned, Silicon Valley-based Kimpton Hotels offers pet bereavement days.

How about where you work? Does your employer or company offer pet-related benefits?