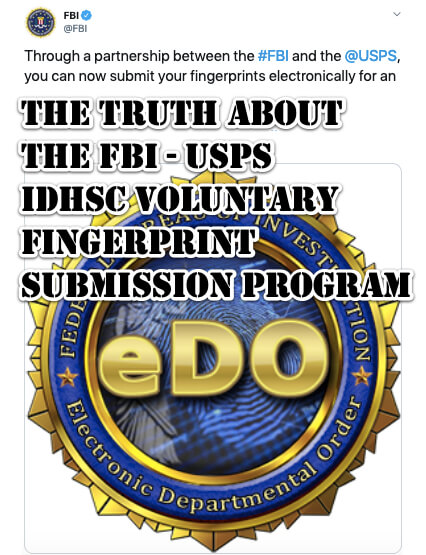 There’s a lot of confusion around the Internet about the FBI’s recently announced idHSC program (seen by some as ldHSC), where you can voluntarily submit your fingerprints at the post office (USPS) to find out what agencies have associated with your fingerprints.

This hasn’t been helped by the fact that the link that the FBI gave out on Twitter for more information (edo.cjis.gov) fails, and that on tiny screens the “i” of idHSC can look like an “l” as in “ldHSC”! Here’s the real info about the FBI’s identity history summary check (idHSC)

On December 6th, 2019, the FBI tweeted this message: “Through a partnership between the #FBI and the @USPS, you can now submit your fingerprints electronically for an identity history summary check (IdHSC) while you buy stamps or mail packages. Learn more about IdHSC and find participating post offices at http://edo.cjis.gov.” 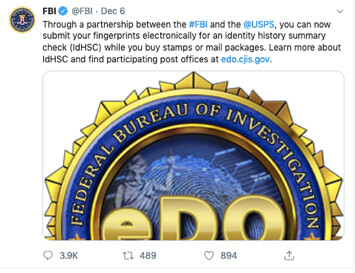 This was almost immediately followed by howls of outrage, which lead to a smattering of hysteria over the misinterpretation of what the idHSC is.

For example, when journalist Glenn Greenwald tweeted “This is so generous. Thank you for the opportunity to submit our fingerprints to the agency that rounded up Muslims after 9/11, tried to blackmail MLK into committing suicide, still has its headquarters named after J. Edgar Hoover & systematically abuses basic civil liberties ❤️,” some people took it to mean that the FBI was encouraging people who had no records to volunteer their fingerprints. Now Glenn’s a smart guy, and nowhere did he suggest that, but that didn’t stop people from interpreting it that way. 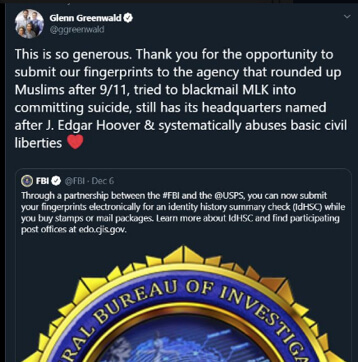 Others simply inferred it directly from the FBI’s post: 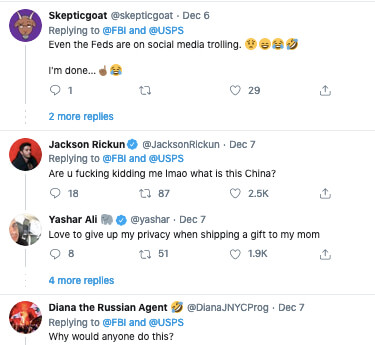 Now, of course, given that the “edo.cjis.gov” webpage that the FBI posted for more info about the idHSC program was …not.. people really can’t be blamed for imagining the worst. After all, it is the FBI, and they are asking you to volunteer fingerprints.

Here is the accurate information, from the correct idHSC information webpage (which is actually at https://www.fbi.gov/services/cjis/identity-history-summary-checks).

“For a fee, the FBI can provide individuals with an Identity History Summary—often referred to as a criminal history record or a “rap sheet”—listing certain information taken from fingerprint submissions kept by the FBI and related to arrests and, in some instances, federal employment, naturalization, or military service.

If the fingerprint submissions are related to an arrest, the Identity History Summary includes the name of the agency that submitted the fingerprints to the FBI, the date of the arrest, the arrest charge, and the disposition of the arrest, if known. All arrest information included in an Identity History Summary is obtained from fingerprint submissions, disposition reports, and other information submitted by authorized criminal justice agencies.”

That said, there is this insidious little tidbit further down on the FBI’s idHSC page:

Only you may request a copy of your own Identity History Summary (or proof that one does not exist). You would typically make this request for personal review, to challenge information on record, to meet a requirement for adopting a child, or to meet a requirement to live, work, or travel in a foreign country.

If you know that you have never been fingerprinted, or even if you aren’t sure whether you have, then yes, you would be volunteering your fingerprints to the FBI. And that, we agree, is something that you do at your own risk.

Number of people who have enjoyed this article: 1,636