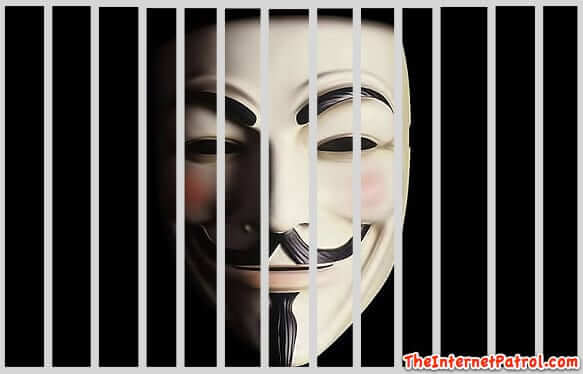 Jonathan McRae was arrested while wearing an Anonymous mask during a public hearing regarding election and voting issues in Maricopa county, Arizona. Note that we did not say that he was arrested for wearing the Anonymous mask, but rather while wearing the Anonymous (Guy Fawkes) mask. And, in fact, the mask wasn’t even covering his face (he had it up on his head – see the below video link).

We’ve written several times before about the hackers ‘hacktivist’ group Anonymous, and while we have no reason to believe that Mr. McRae is affiliated with the group, we wouldn’t be surprised to see the group come out of dormancy to provide some special ‘support’ to him. In fact, on the Anonymous Legion Facebook page, there are several posts related to McRae’s arrest.

That said, McRae was not arrested for wearing the Anonymous mask. He was arrested and charged with trespassing, resisting arrest, and assault of a police officer.

So, let’s back up a little.

On March 22nd, Arizona held its ‘Presidential Preference’ election. A presidential preference election (PPE), according to the State of Arizona, is not a primary, but is “a preference election, whereby registered voters of participating, recognized political parties cast their vote for who they prefer the Arizona delegates cast their vote for at their party’s national convention.”

This is distinguished from Arizona’s primary election, which does “not contain presidential/vice presidential candidates.”

None of this is really relevant to the issue at hand, however. What is relevant is that there was a presidential preference election on March 22.

Sometime between the 2012 election, and March 22, 2016 (the date of the 2016 presidential preference election), a decision was made to reduce the number of polling places in Maricopa county, from 200, to 60. This was based, Purcell said, on “the estimate her office made of the total number of voters who would show up in person, a calculation based on previous elections.”

The day before the 2016 PPE, the Maricopa County polling place list did indeed list exactly 60 polling places. (It should be noted that Maricopa county had also made the unprecedented (for them) decision to allow voters to vote at any of the polling places, instead of having to go only to a single location as designated by precinct.)

Now, it may well be true that when the decision to close two-thirds of polling places in Maricopa county was made – closing 140 polling places, and leaving only 60 – that it made sense to someone. However, a week and a half before the 2016 election, Purcell announced on Twitter that they had just crossed the 2million active voters mark.

According to AZ Central, the closures meant that Maricopa county was left with one polling place for each 21,000 people.

So surely someone might have figured out that with the swelling number of active voters, trying to funnel all of those voters into 1/3 the number of polling places would be like a snake trying to swallow a goat. The digestion process was almost certain to be long, slow, painful, and messy.

And that’s exactly what happened.

Polling places ran out of ballots.

People in wheelchairs waiting on lawns got soaked when sprinklers turned on.

Lines were still long when some of the polling places closed.

It was, in short, an election fuster cluck.

Not only that, but some people who showed up to vote found that their status had inexplicably been changed to inactive, or switched to the wrong party, making them ineligible to vote at all.

People started suspecting, and then protesting about, perceived election fraud.

Protests started happening at Purcell’s office, as well as at the office of at least one other official.

And according to the Phoenix New Times, the Feds got involved when the DOJ delivered a letter to county officials “asking a whole lot of questions about the excessively long lines at the March 22 Presidential Preference Election in Maricopa County,” and instructing the county to explain how they will “avoid such concerns in future elections.”

In this atmosphere, a county hearing was held on March 28th over all of these issues, as well as others, not relevant to this article. It is being called the Arizona Election Fraud Hearing.

Protestors showed up at the hearing. Jonathan McRae was there in the crowd. With his Anonymous mask.

But here is where it gets murky.

Many of the protestors (and others) who were at the hearing were there to speak. It was, after all, a public hearing. However, Representative Michelle Ugenti-Rita, who was chairing the hearing, cut the hearing short after three hours of testimony, abruptly depriving many others, who were still waiting to speak, of an opportunity to do so.

When the election fraud hearing was terminated, many people filed out of the session chamber, to an area known as the Gallery. Accounts say that they some of them were loud.

McRae may or may not have been one of them – that is not yet fully known.

Meanwhile, other business was being taken up in the chamber, and what is known is that McRae was sitting in the chamber, quietly, watching the next proceedings, when police approached him, and ultimately arrested him.

What is also known is that they arrested him for trespassing, aggravated assault, and resisting arrest.

The most widely distributed video of McRae getting arrested suggests that when he was arrested he was sitting quietly, doing nothing.

Stacey Champion, described as a community activist in Arizona, has other videos of interactions between county officials, the police, and McRae on YouTube.

Now, piecing everything together, here is our educated guess as to what happened – but remember, this is only our guess, but also the most likely set of facts given the information that we have:

Our guess is that McRae was out in the gallery, may or may not have been noisy (the suggestions that he was targeted by police or others because he had the Anonymous mask atop his dreadlocked hair don’t seem out of the question, and Stacey Champion’s videos certainly support that interpretation), and was told to leave the premises.

If he was told to leave the premises, and instead went back into the chamber to watch the next session, he could then have been deemed to be trespassing. And, if this is what happened, he may well have had no idea that he was trespassing. It was a public, county building. He’s a constituent. He may have believed that his rights allowed him to be there so long as he was not creating a disturbance. Again, this is all conjecture, but fits.

Not only does it fit, but it is, in fact, roughly consistent with what the police are saying happened.

According to AZ Central, the aggravated assault charge stems from this following interaction:

“Court documents said that after six state troopers carried him out of the gallery, Mcrae was taken to the Capitol District Facility, where he was searched for weapons.

When authorities asked Mcrae if he had any weapons, he said no. However, one state trooper searching the man was pricked by an open safety pin that was hanging out of the left side of McRae’s shorts.

Court records identified the safety pin as a weapon of assault, and the trooper sought medical assistance for his injury.”

Let us break that down for you:

The officer did a patdown. He was pricked by a safety pin during the patdown that he was performing.

As a result, McRae is charged with aggravated assault, which is, by the way, a felony.

Meanwhile, it is being alleged that McRae received these injuries at the hands of the police officers who hauled him away: 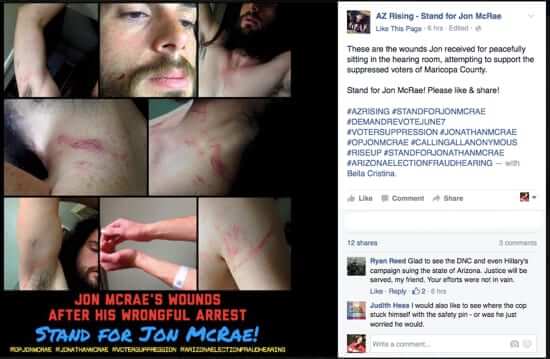 About the election issue, Purcell acknowledged that “We made some horrendous mistakes, and I apologize for that.”

Anybody want to guess what the odds are that the police will say the same thing?

By the way, for the upcoming primary, Maricopa County now has 112 polling places open.

Number of people who have enjoyed this article: 1,038