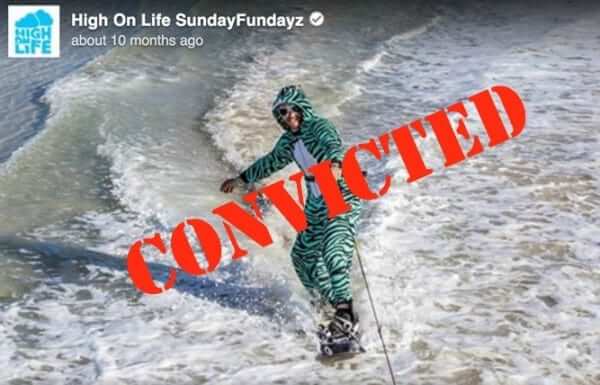 Three principals of Canadian clothing company High on Life, who trespassed at Grand Prismatic Spring in Yellowstone, as well as other locations, in order to post their deeds on social media, have been convicted of misdemeanor criminal trespassing and disorderly conduct, and sentenced to 5 years probation (all of them) and a week in jail (two of them). In addition to the trespass on the fragile Grand Prismatic Spring, Charles Ryker Gamble, Alexey Andriyovych Lyakh and Justis Cooper Price Brown all pleaded guilty to trespass violations in Zion National Park, Mesa Verde National Park, and Death Valley National Park. Additional trespasses on behalf of High on Life occurred at Corona Arch and Bonneville Salt Flats.

The trespasses originally occurred in the spring of 2016, during what they dubbed as, filmed as, and eventually released a video called, [Page no longer available – we have linked to the archive.org version instead].

The group used both photos and videos, some taken with drones (another violation) in their social media campaigns, including on their Facebook page.

We note that the video, which is up on their website as well as YouTube, still contains scenes of the men cavorting in what appears to be both Bonneville Salt Flats and Yellowstone (as well as possibly elsewhere, there are a lot of scenes in that 3-minute video), and that it has received nearly 87,000 views on YouTube. Meaning, they may well still be making money off their illegal actions.

Said John Powell, a spokesperson for the U.S. Attorney’s Office in Wyoming, in a statement to K2 Radio, “It’s a misdemeanor regardless of the attention [it’s getting]. It’s not something we’re going to actively try and get them back into the country [for].”

Still, somehow (how is not clear), three of the group – Gamble, Lyakh, and Price Brown, ended up in front of U.S. Magistrate Judge Mark Carman at the Yellowstone Justice Center last week, and were sentenced.

The two who will serve jail time are Lyakh and Gamble, who pleaded guilty to charges including disorderly conduct in trespassing in a ‘thermal area’ and creating a hazardous condition, as well as using a drone in a closed area, riding a bike in unpermitted areas, and conducting commercial photography without a permit.

K2 Radio observes that “They also must remove all photographs and videos of the public lands where they were charged with violations from their social media accounts,” something which they appear to not have yet done, as you can see here:

San Bernardino DA Suggests "lying dormant cyber pathogen" on Shooter's iPhone
Full Text of the Mazars Letter to the Donald Trump Organization Withdrawing as Trump's Accountants o...
Yes, Virginia, there is a Spammer Clause
Colorado Second State to Enact New Consumer Data Protection Law in 90 Days
Do You Still Have to Follow GDPR after Brexit if You are in the UK? Yes
The Truth about the FBI USPS idHSC Voluntary Fingerprint Submission Program
Microsoft Fights Federal Warrant to Access Email Data in Ireland
What Does #mcm Stand for?
Share the knowledge

Number of people who have enjoyed this article: 810