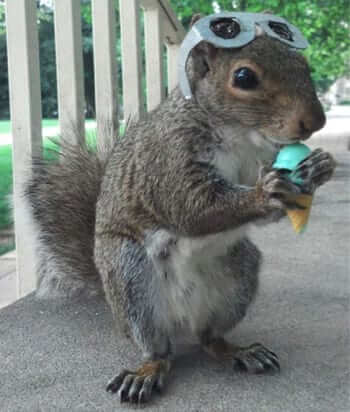 Not since Basher, the photobombing squirrel, has such a tiny animal made such a splash on the Internet. Until now. Sneezy, the Penn State squirrel, whose friend Mary Krupa dresses her (or him) up with hats and props, now has a Facebook page with nearly 20,000 “likes”. 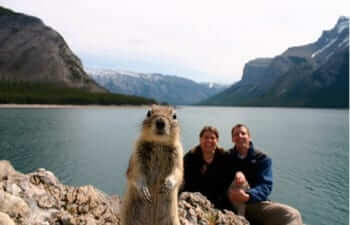 Although Sneezy and the other squirrels with whom Krupa interacts are wild, living in a tree across from the Old Main building on Penn State campus, Krupa has managed to get them so used to her that they will climb up on her lap when she sits down near their tree, earning for herself the nickname “The Squirrel Whisperer”.

As Krupa acknowledges during an interview with NPR, “Yeah, I mean, putting hats on squirrels is not exactly normal behavior.”

Normal or not, her interaction with the squirrels, and the pictures of Sneezy (or a Sneezy body double) in her hats have got people rushing to Sneezy the Squirrel’s Facebook page.

And not just hats. Krupa says that Sneezy is now down with props, leading to tableux of Sneezy at a grill on the 4th of July, and, more recently, Sneezy having high tea.

Says Krupa, “I started realizing that she’ll do props now, too. I borrowed a little doll tea set from my aunt. And I put a little peanut butter on the cup. And I have a nice picture of her. She’s having a fancy English tea.”

You can check out Sneezy in all her finery on Facebook.

Lawsuit Over Facebook Breaching Users' Privacy to Move Forward, Court Rules
About the Weird Codes that Appear When You Dictate Something on Facebook from Your iPhone
How to Make Facebook Read Messages in a Page Instead of a Chat Window
How to Know If You Are Interacting With a Bot
People Who Comment on Your Facebook Posts Aren't Always Your Friends
How to Make Facebook Chat Not Open Facebook Messenger on Your Phone
Is The Internet Changing Our Brains?
Facebook is Analyzing All of Your Images and Taking Note of the Contents