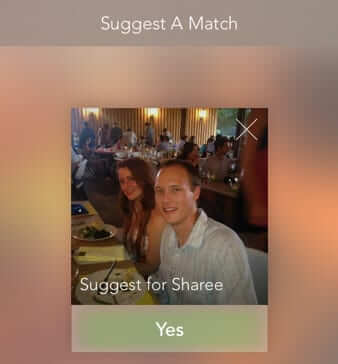 Spritzr is a new dating app with a twist: it’s also a matchmaking app. Now this is an idea whose time has come, and the Spritzr reviews all seem to agree! How many times have you thought to yourself “I should introduce this Facebook friend to that Facebook friend – they’d be perfect for each other!” Now you can play that matchmaker with Spritzr.

In fact, when you download and install Spritzr from the app store, you can register as just a matchmaker, so that even if you are married or otherwise not single, it’s safe to get the app if you want to play matchmaker for your friends with Spritzr. 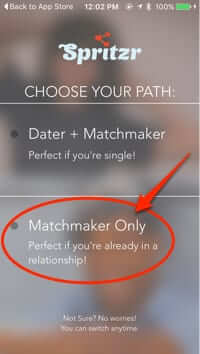 How Matchmaking Works with the Spritzr App

After you download the Spritzr app from the iTunes app store (Spritzr is not available for Android as of the time of this writing, although they say that it’s “coming soon”), when you open it, and after the “Spritzr would like to send you notifications” notice, you will immediately be prompted to either sign up as a dater plus matchmaker, or as a matchmaker only. 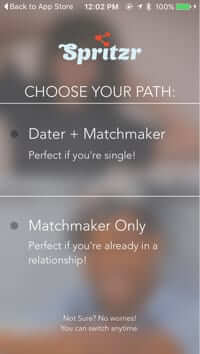 Either way, you get to play matchmaker. 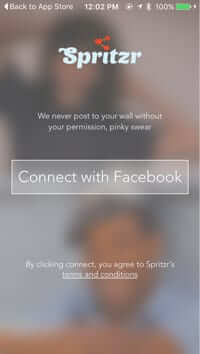 In fact the only bad Spritzr review we could find was someone complaining that it only works with Facebook. Of course, that’s because you kind of have to be signed into Facebook to, you know, matchmake your Facebook friends.

Once you are connected to Facebook, you can either matchmake between two of your Facebook friends, or ‘Play Matchmaker for Anyone’. The matchmaking for anyone section is where you will find people who have registered in Spritzr as a dater as well. If you choose to matchmake for anyone, you will be shown the picture of someone who registered as a dater, as well potential matches, also from people who registered as dater.

Each potential dater comes with a little bit of info about them. 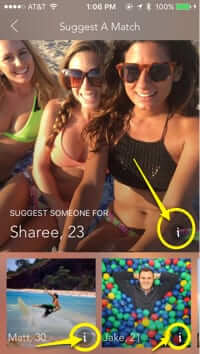 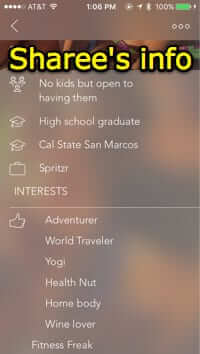 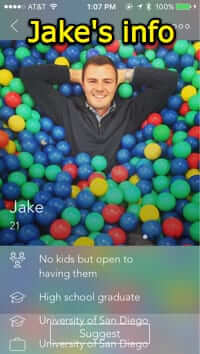 If you think that someone is a good match for the dater (in this example Sharee), you just drag their thumbnail up on top of the dater’s profile. 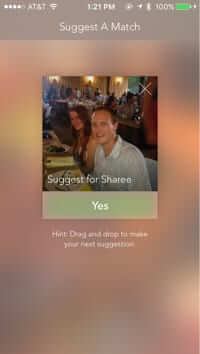 It works in roughly the same way if you are instead suggesting a match between two of your own Facebook friends, and once you make the match, the app notifies both people whom you have matched. 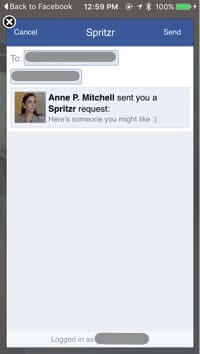 The reviews of Spritzr have been overwhelmingly very positive.

“Tired of Tinder?” asks one 5-star review “I really like how Spritzr looks and it’s really simple to use!” “I’m already starting to get great matches” raves another.

In fact, in all of Spritzr reviews in the app store, only one was bad, and that was because the user had apparently not realized that it requires Facebook, which apparently he does not have. 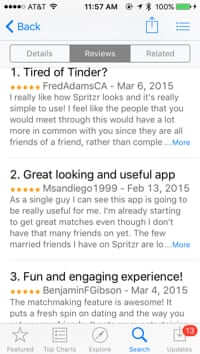 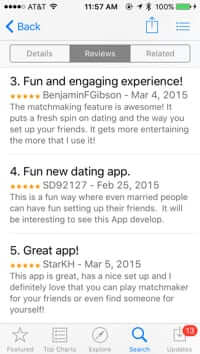 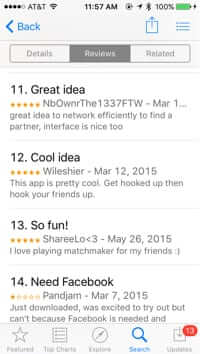 Now, at the start of this we said that this is an idea whose time has come, and we meant it.

But that said, there are a few nits we need to pick.

First of all, there is no way to search through your Facebook friends to find Friend A. You can search for the second friend (Friend B) with whom you want to match Friend A, but you can’t search through your list of Facebook friends for Friend A to start the process. You just have to scroll down, down, down. Crazy, especially given that they clearly have the technology to perform a search for Friend B.

Secondly, the reason you have to just keep scrolling down to find that first Facebook friend, more than you otherwise might, is that Spritzr shows all of your Facebook friends, not just the single ones. We’re not sure why they released it like this, especially when you consider that marital status is right there in people’s Facebook profile, so it’s pretty easy to determine marital status. 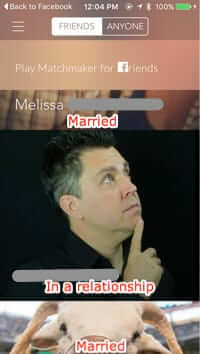 Lastly, but by no means leastly, the notifications to the persons you have matched are just that, notifications. Just like any other Facebook request, it turns out that the beneficiaries of your matchmaking have to get the Spritzr app to participate. Or, perhaps we should say they need to get it in order to “play”, because Spritzr has offputtingly got a split personality. Yes, it’s an app for dating and matchmaking, but as far as (apparently) at least they are concerned, Spritzr is a game. Your own notifications talk about playing, and the notifications to your intended matchees simply take them to the Spritzr app Facebook page, so they can install the app.

So,that’s why we say that it’s an idea whose time has come, but perhaps not this idea, but a similar idea, only with a better implementation.

In the meantime, you may find it less frustrating to use this method to search Facebook for dates.

Digital Driver's License Coming to Some States
The 5 Best Note-taking Apps Ever
The 7 Top Online Dating Tips Based on Online Dating Statistics
Does Private or Incognito Mode Make Browsing Anonymous?
New BroApp App Schedules Automated Text Messages to Your Girlfriend
How to Know If You Are Interacting With a Bot
Making Your iPhone Work For You: Taking Shortcuts
Have You Been Ghosted by Someone with Whom You had a Date? Why do People Ghost?
Share the knowledge

Number of people who have enjoyed this article: 1,524