It’s very simple to use your Android tablet or iPad as a second screen for your Mac or Windows computer with either the Avatron Air Display app, or the iDisplay app, either of which are available for both iOS and Android, and at just $9.99 are a fraction of the cost of a second monitor. Not to mention that it’s a heck of a lot easier to cart around to use in conjunction with your laptop! (And if you want to run iDisplay on your iPhone or iPod, you can get the iDisplay Mini app for just .99!)

Here at the Internet Patrol we use iDisplay (in part because we love the fun iDisplay Mini app), so that is the app on which we will focus, but they work essentially in the same way.

To use iDisplay, you first have to install a free desktop app to your computer, which you can download from the iDisplay site. Then install the appropriate iDisplay app on your iPad, Android tablet, or iPhone or iPod. Again, the regular app is $9.99, and the iDisplay Mini app for iPhone or iPod is just 99 cents.

Once you have your desktop app set up, open the app on the iPad, Android tablet, iPhone or iPod. Again, in this example we are using it on an iPhone.

And that’s all there is to it! Here is us moving a browser window from the Macbook to the iPhone, we stopped it in mid-move to show you the second screen function in mid-use: 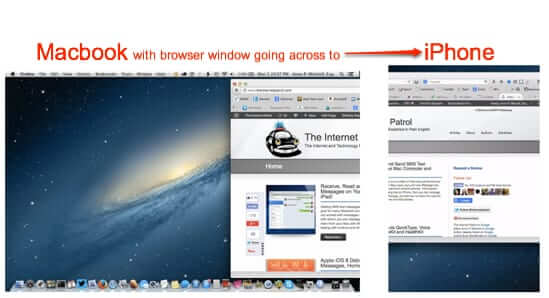 What’s really cool is that the iPhone works as an extension of the Macbook’s display so seamlessly that we were able to take a screen shot of the entire “screen” even though it spanned two devices!:

And here is the entire desktop mirrored on an iPhone. 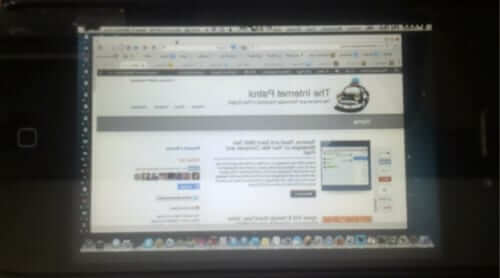 How adorable is that?

You can get your iDisplay second screen app here.

How to Clean Your Apple Watch Milanese Loop Watch Band
World's First Consumer-Ready Foldable Phone to Go on Sale Later This Month with Samsung Galaxy Fold
Mac Mail Search Not Working on Monterey, Big Sur, or Catalina? Do This
Yes, You Can Download All of Your iTunes Purchases Again
Can't Download Gmail after an OS Update or Upgrade? This May be the Problem
This One Simple Trick Will Reclaim Your Time and Reduce Your Stress
How to Capture and Record Streaming Video on Your Mac
Employees Hurt by Illegal Non-Poach Agreement Between Apple, Google, Intel, IBM, eBay, Microsoft, an...
Share the knowledge

Number of people who have enjoyed this article: 3,761