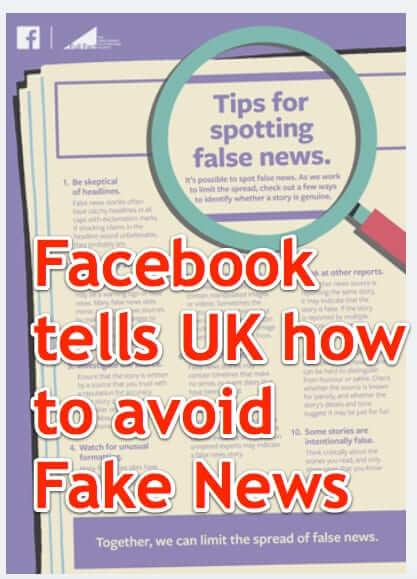 Facebook has taken out a full-page “Tips for Spotting False News” ad in British newspapers, telling people how to spot and avoid fake news ahead of the UK general election. Facebook has also been deleting tens of thousands of fake Facebook accounts that were created solely to spew false news stories, particularly ahead of elections. In fact, Facebook has said that ahead of this week’s election in France, they removed more than 30,000 accounts that were spreading fake news stories that could have (and were likely intended to) influence that election.

The papers in which the ‘how to spot fake news stories’ advertisement appears include the Times, the Guardian, and the Daily Telegraph. 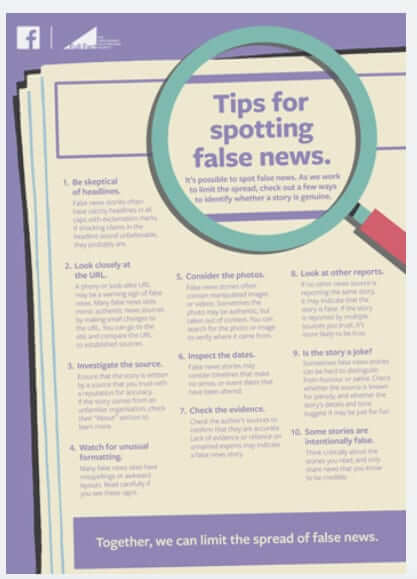 Below is the full text of Facebook’s full-page advertisment in the British papers, but first we want to remind our readers that they can see a visual representation of how any fake news story is spreading (or was spread) by using the awesome Hoaxy fake news visualizing service.

(This information can also be found on Facebook, here.)

1. Be skeptical of headlines. False news stories often have catchy headlines in all caps with exclamation points. If shocking claims in the headline sound unbelievable, they probably are.

2. Look closely at the URL. A phony or look-alike URL may be a warning sign of false news. Many false news sites mimic authentic news sources by making small changes to the URL. You can go to the site to compare the URL to established sources.

3. Investigate the source. Ensure that the story is written by a source that you trust with a reputation for accuracy. If the story comes from an unfamiliar organization, check their “About” section to learn more.

4. Watch for unusual formatting. Many false news sites have misspellings or awkward layouts. Read carefully if you see these signs.

5. Consider the photos. False news stories often contain manipulated images or videos. Sometimes the photo may be authentic, but taken out of context. You can search for the photo or image to verify where it came from.

6. Inspect the dates. False news stories may contain timelines that make no sense, or event dates that have been altered.

7. Check the evidence. Check the author’s sources to confirm that they are accurate. Lack of evidence or reliance on unnamed experts may indicate a false news story.

8. Look at other reports. If no other news source is reporting the same story, it may indicate that the story is false. If the story is reported by multiple sources you trust, it’s more likely to be true.

9. Is the story a joke? Sometimes false news stories can be hard to distinguish from humor or satire. Check whether the source is known for parody, and whether the story’s details and tone suggest it may be just for fun.

10. Some stories are intentionally false. Think critically about the stories you read, and only share news that you know to be credible.

Cellular Phone Charger Powered by Hamster and Wheel
U.S. Government in Talks with Google, Facebook, to Track Location of Where Individuals with Coronavi...
Facetime with Your Plants! (And Water Them from Anywhere)
New Facebook Patent Lets Lenders Determine Whether to Give you a Loan based on Your Facebook Friends
If You're Not Checking Your Facebook Filtered Folder You're Missing Messages
What the new U.S. - Cuban Relationship Means for Cuba and the Internet
What Does #hmu4atbh Mean? We Explain
How to Share the New Facebook Lookback
Share the knowledge

Number of people who have enjoyed this article: 612